New Form Of Matter: Supersolid Is Both Superfluid And Crystalline At The Same Time
By News Staff | March 14th 2017 04:05 AM | Print | E-mail

News Staff
By using lasers to manipulate a superfluid gas known as a Bose-Einstein condensate, the team was able to coax the condensate into a quantum phase of matter that has a rigid structure — like a solid, and can flow without viscosity, a key characteristic of a superfluid.  Basically, they have created a supersolid, a new form of matter which combines the properties of solids with those of superfluids.

Isn't that a contradiction?

“It is counterintuitive to have a material which combines superfluidity and solidity,” says team leader Wolfgang Ketterle, the John D. MacArthur Professor of Physics at MIT. “If your coffee was superfluid and you stirred it, it would continue to spin around forever.”

Nonetheless, supersolids were predicted even if perpetually spinning coffee has never been seen. The researchers theorized that solid helium could become superfluid if helium atoms could move around in a solid crystal of helium, effectively becoming a supersolid. So the team used a combination of laser cooling and evaporative cooling methods to cool atoms of sodium to nanokelvin temperatures. Atoms of sodium are known as bosons, for their even number of nucleons and electrons. When cooled to near absolute zero, bosons form a superfluid state of dilute gas, called a Bose-Einstein condensate, or BEC.

Ketterle co-discovered BECs with Professor Carl Wieman (read his articles here) and Eric Cornell, a discovery for which they were recognized with the 2001 Nobel Prize in physics.

“The challenge was now to add something to the BEC to make sure it developed a shape or form beyond the shape of the ‘atom trap,’ which is the defining characteristic of a solid,” explains Ketterle. 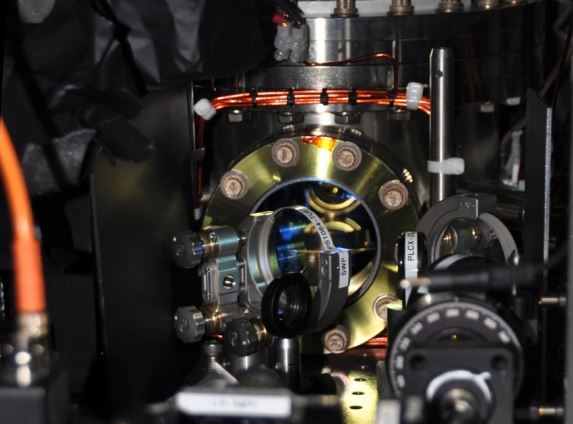 Flipping the spin, finding the stripes

To create the supersolid state, the team manipulated the motion of the atoms of the BEC using laser beams, introducing “spin-orbit coupling.” In their ultrahigh-vacuum chamber, the team used an initial set of lasers to convert half of the condensate’s atoms to a different quantum state, or spin, essentially creating a mixture of two Bose-Einstein condensates. Additional laser beams then transferred atoms between the two condensates, called a “spin flip.”

Physicists had predicted that a spin-orbit coupled Bose-Einstein condensate would be a supersolid due to a spontaneous “density modulation.” Like a crystalline solid, the density of a supersolid is no longer constant and instead has a ripple or wave-like pattern called the “stripe phase.”

The supersolid only exists at extremely low temperatures under ultrahigh-vacuum conditions. Though the theories have been shown possible, there are no practical applications anticipated.
News Articles
More Articles All Articles
About