News Staff
New York Attorney General Eric T. Schneiderman is clearly on the campaign trail for his next job, because even in a state that is lawsuit happy like New York he is setting records for most pointless emails about investigations and lawsuits.

But now he says the science is on his side, not just his political interpretation of the law, and that will get a response where the usual politics won't. So let's see if this is about science or greed.

Just a few years ago, Northeast Fisheries Science Center, part of the National Oceanic and Atmospheric Administration (NOAA), proposed a 43 percent slashing of the summer flounder - Paralichthys dentatus, also called fluke - catch, popular on the east coast, but now Attorney Schneiderman and Governor Andrew M. Cuomo have filed a petition with the federal government to be able to catch more summer flounder; without any ecosystem evaluation. 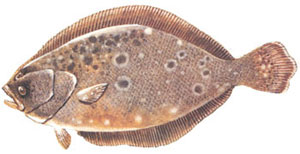 New York is not alone in its protest. In New Jersey, the state’s environmental protection commissioner, Bob Martin, filed a lawsuit against the stricter quota. An environmentalist arguing for jobs and against a fishing quota? The federal data indicate the stock declined an estimated 22% between 2010 and 2015. And because of overfishing the fish are too small. And there is worry because in the 1980s summer flounder had declined a lot. Not so by people who claim to care about the environment today, they want more fish caught. And more money doing it. “New York’s commercial fishing industry deserves a fair shake from the federal government," says Schneiderman.

He may be right in calling out the NOAA claim, because even NOAA can't agree. An Obama-era holdover at NOAA claims global warming is causing fluke to decline. And New Jersey data don't show a decline in number, they say the numbers have been level for 25 years and that the federal methodology is outdated. It may be, if they think global warming is already causing fish eggs to boil.

Yet Attorney  Schneiderman is only arguing about money, when he could make a science argument. Most of the larger fish caught will be females, and they obviously lay the eggs. So mandating a larger size fish by an inch or so doesn't help. And some data show flounder are moving north, which would argue for more fishing by New York and penalizing competitors in others states; an odd argument for an attorney general to make but a predictable one by a politician seeking higher office.

Of course, the real solution to depleted stock is farmed fish. But what are environmentalists, a key needed donor group in New York, opposed to? Farming fish. It's fine for the peasant class but if you visit any elite Manhattan restaurant, diners won't order seafood unless they are assured it was caught by blue-collar workers in bottom otter trawls at a cost to Gaia.
News Articles
More Articles All Articles
About