News Staff
A recent analysis links sudden loss of wealth in middle or old age with a 50 percent higher risk of dying than those who do not have such loss. The effect can last for two decades, and whether participants are very wealthy or have only modest savings made no difference.

The paper is in the Journal of the American Medical Association, and they have gotten increasingly epidemiology focused and less scientific as the decade has progressed, so some skepticism is in order.  And it is justified, although corporate journalism claims have repeated the press release without reading the study itself.

So is there a social determinant of health or is ir just that in a material society, a loss of wealthy leads to severe depression and therefore suicide?

The data came from the Health and Retirement Study, a nationally representative study of U.S. adults ages 51-61 at study entry. The cohort of 8,714 adults were assessed for negative wealth shock in 1994, with follow-up interviews every two years until 2014. Average age at study entry was 55 years, with 53 percent identifying as female. Of the participants, 90 percent reported having wealth, and 2,430, or 26 percent, of them experienced a negative wealth shock during that period, while 5,535 had continuously positive wealth without shock. During the same period, 2,823 participants died.

Negative wealth shocks were deemed the loss of 75 percent of a person's wealth in a two-year period.

Those who had negative wealth shocks were more likely to be female, of nonwhite race/ethnicity, have lower levels of household income and net worth and have poor health. The 50-percent increased risk of mortality for those who experienced wealth shock was similar to the 67-percent increased risk of individuals living in poverty who have no net worth. 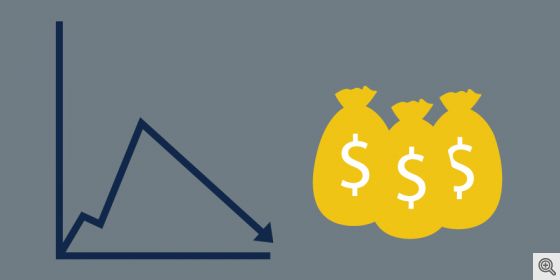 Since they took short term data and estimated long-term effects there are numerous issues. Older people are likely to have chronic health issues. If you are a senior with late stage cancer and incur gigantic medical bills and die, the study correlates the loss of wealth to the death when the biggest risk factor for almost every disease is age. And then there is the depression that comes with loss of wealth, which leads to much higher suicide rates in older people. Finally, older people will be at higher risk of devastating substance abuse.

So if you have lost a great deal of relative wealth - it didn't matter if it was $50,000 or $5,000,000 - get counseling. If your negative wealth shock was due to terminal illness, your risk was not increased at all due to the bills.
News Articles
More Articles All Articles
About