The Baltic Sea is home to some of the world's largest areas of oxygen-starved waters where most marine animals can't survive - dead zones - and it has been that way for as long as records have been kept, but a new study estimates that oxygen loss in coastal areas over the past century is unprecedented in the last 1500 years.

According to the researchers, human-induced pollution, from fertilizers and sewage running off the countries surrounding the Baltic into the sea, is the main driver of recent oxygen loss in the region's coastal waters. If low-oxygen areas spread it can reduce fish yields for indigenous people and even lead to increased mortality of marine animals. 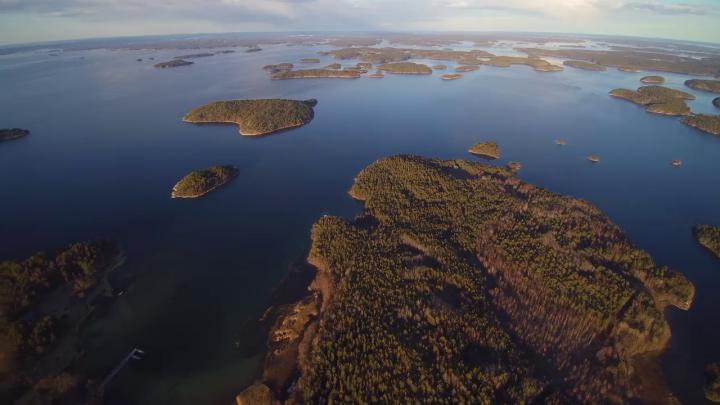 Aerial view of the Archipelago Sea (to the west, study location in the background). This shallow coastal area in the northern Baltic Sea is characterised by a mosaic of thousands of islands, comprising a remarkably diverse environment both geologically and biologically. CREDIT: Kari Mattila, The Archipelago Research Institute

To try and determine what fueled oxygen loss in the past, the team drilled and studied a 4-meter-long sediment core from the sea floor in the Archipelago Sea. This allowed them to see, for the first time, how oxygen levels changed in this area over the past 1500 years, which included the Medieval Warming Period, a 400 year stretch of warmer climate that obviously would have had less nutrient pollution. They determined that oxygen levels were also low during the warmer medieval period, but say the present oxygen loss is "unprecedentedly severe."

Nutrient pollution has gotten much better but it doesn't seem to have helped yet. The authors found "no evidence of recovery" from oxygen depletion in the Archipelago Sea, a coastal area between mainland Finland and Sweden that is part of the Baltic. What explains that? Their guess is climate change. Since warm waters are less effective at holding oxygen, global warming is likely to exacerbate oxygen depletion, so even though it didn't cause the current dead zone, they speculate it could be a factor delaying the recovery.