News Staff
If you have seen a face in the clouds or you have been part of a phenomenon called "pareidolia" - a willingness to recognize a non-face object as a human face.

Humans sometimes perceive an inherently meaningless object such as a pattern, landscape or object as another object, one that has meaning. It's why alternative science proponents, the Jeffrey Smith's and Pete Myers of the world, believe in spirit photographs.

Some have even argued that pareidolia occurs in relatively low-level visual processing, and a new paper examines the relation between behavior when a face-like object is viewed and brain activity to reveal the level of visual processing at which face-likeness is recognized. 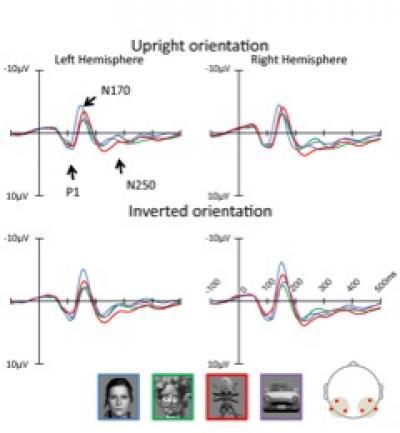 The brain when a face-like object is viewed.Credit: Toyohashi University of Technology.

They hope the results of this study are believed to serve as a key to uncovering the mechanism of how humans recognize and distinguish between two types of information - "face-likeness" and objects. The results of the present study also suggest that "face-likeness" recognition occurs in early visual processing and that face-like objects are processed in the same manner as a human face in later stages.
News Articles
More Articles All Articles
About