Peering Into The Void: Cosmic Web Reveals This Part Of The Early Universe Had Almost No Matter!
By News Staff | August 15th 2018 04:26 AM | Print | E-mail

News Staff
About 1 billion years after the Big Bang, the gas in deep space was highly opaque to ultraviolet light and its transparency varied widely from place to place, obscuring much of the light emitted by distant galaxies. This opaque quality contains tantalizing mysteries about the universe.

That's because now the gas between galaxies is almost totally transparent thanks to being kept ionized-- electrons detached from their atoms--by an energetic bath of ultraviolet radiation.

We now know that we consider matter, all of the mass and energy we can measure in any way, is only 6% of the universe. What makes up the other 94%? No one knows so it's speculation under the umbrella terms "dark matter" or "dark energy", but using inference we have some idea what's in the "cosmic web." We definitely know that galaxies like our own Milky Way make up only a small fraction of what must be out there. And we know that in the first billion years after the Big Bang, ultraviolet light from the first galaxies filled the universe and permanently transformed the gas in deep space. Astronomers believe that this occurred earlier in regions with more galaxies, meaning the large fluctuations in intergalactic radiation inferred in a new paper may be a relic of this patchy process, and could offer clues to how and when it occurred. 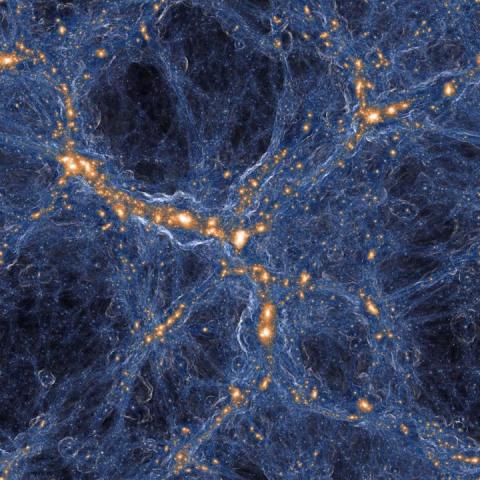 "Today, we live in a fairly homogeneous universe," says George Becker, assistant professor at the University of California, Riverside. "If you look in any direction you find, on average, roughly the same number of galaxies and similar properties for the gas between galaxies, the so-called intergalactic gas. At that early time, however, the gas in deep space looked very different from one region of the universe to another."

To find out what created these differences, the authors of a new paper turned to the Subaru telescope on the summit of Mauna Kea in Hawaii. They looked for galaxies in a vast region, roughly 300 million light years in size, where they knew the intergalactic gas was extremely opaque. For the cosmic web more opacity normally means more gas, and hence more galaxies. But the team found the opposite: this region contained far fewer galaxies than average. Because the gas in deep space is kept transparent by the ultraviolet light from galaxies, fewer galaxies nearby might make it murkier.

"Normally it doesn't matter how many galaxies are nearby; the ultraviolet light that keeps the gas in deep space transparent often comes from galaxies that are extremely far away. That's true for most of cosmic history, anyway," said Becker. "At this very early time, it looks like the UV light can't travel very far, and so a patch of the universe with few galaxies in it will look much darker than one with plenty of galaxies around."
News Articles
More Articles All Articles
About