News Staff
In order to evolve you must first survive, and Darwin posited that this "survival of the fittest" was a driver in natural selection. To the casual reader in 1859, cooperation was hard to reconcile with that, but humans had become the apex predator by both cooperating and competing.

Cooperation is actually quite common. We have bacteria in our guts which can be helpful or harmful but are often helpful. Root bacteria fix nitrogen from the atmosphere, thus making it available to plants. In return, the plant supplies its root bacteria with nutritious sugars. Our own energy cells, mitochondria, have to have been created after mutually benefiting by trading energy for protection - they even have their own genome.

Yet why that would evolve when it is costly for both interaction partners to support each other is a challenge to understand. For example, the provision of sugar requires energy, which is then not available to the plant anymore. From this results the risk of cheating interaction partners that consume the sugar without providing nitrogen in return. 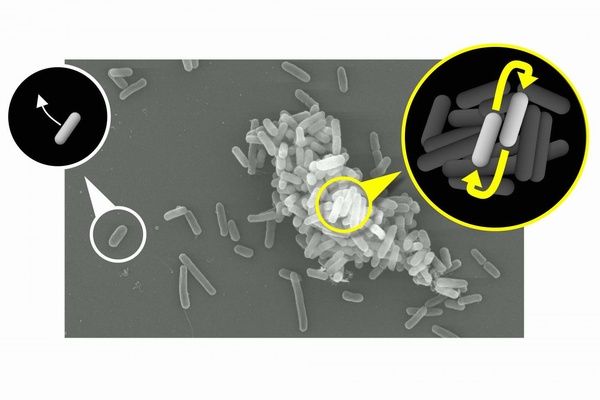 Positive feedbacks favor cooperative bacteria, which are part of a multicellular group (right). In contrast, individual bacterial cells that try to help others (left) do not benefit. Source: Department of Ecology at the Osnabrueck University

A new study sought to get new answers and used bacteria as a model system to study the evolution of mutual cooperation. At the beginning of the experiment, two bacterial strains could only grow when they provided each other with essential amino acids. Over the course of several generations, however, the initial exchange of metabolic byproducts developed into a real cooperation: both partners increased the production of the exchanged amino acids in order to benefit their respective partner.

Even though the increased amino acid production enhanced growth when both partners were present, it was extremely costly when individual bacterial strains had to grow without their partner.

The observed changes were caused by the fact that individual bacterial cells had assembled into multicellular clusters. In these cell groups, cooperative mutants were rewarded. The more resources they invested in the growth of other cells, the more nutrients they received in return from their partners.