News Staff
A new photoelectrode can harvest 85 percent of visible light in a 30 nanometers-thin semiconductor layer between gold layers, converting light energy 11 times more efficiently than previous methods, another step on the road to turning solar power from an expensive subsidized sideshow into the default energy of the future.

While natural gas has done much to cause energy emissions in developed nations to decline, it remains under constant attack. Since nuclear will likely never recover from the public relations campaigns waged against it by environmental activists, and wind is a gimmick for natural areas the way geothermal is, that leaves solar energy. But today it is far too costly for far too little power. For example, New York is concerned because they want to close their nuclear power plant but economists worry that poor people will be devastated by the 60 percent increases in energy cost if solar or wind are replacements.

In the pursuit of realizing a sustainable society, there is an ever-increasing demand to develop revolutionary solar cells or artificial photosynthesis systems that utilize visible light energy from the sun while using as few materials as possible.

The new golden sandwich photoelectrode is a semiconductor, a 30-nanometer titanium dioxide thin-film, between a 100-nanometer gold film and gold nanoparticles to enhance light absorption. When the system is irradiated by light from the gold nanoparticle side, the gold film worked as a mirror, trapping the light in a cavity between two gold layers and helping the nanoparticles absorb more light. 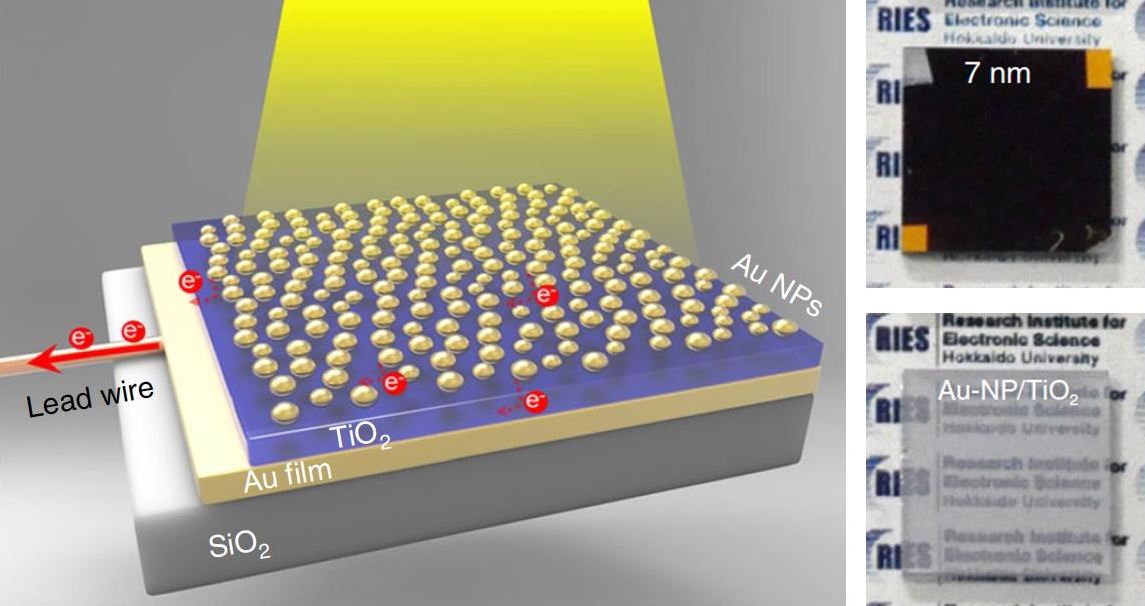 On the left, the newly developed photoelectrode¬, a sandwich of semiconductor layer (TiO2) between gold film (Au film) and gold nanoparticles (Au NPs). The gold nanoparticles were partially inlaid onto the surface of the titanium dioxide thin-film to enhance light absorption. Right: The photoelectrode (Au-NP/TiO2/Au-film) with 7nm of inlaid depth traps light making it nontransparent (top). An Au-NP/TiO2 structure without the Au film are shown for comparison (bottom). (Misawa H. et al., Nature Nanotechnology, July 30, 2018)

They found that more than 85 percent of all visible light was harvested by the photoelectrode, which was far more efficient than previous methods. Gold nanoparticles are known to exhibit a phenomenon called localized plasmon resonance which absorbs a certain wavelength of light and the photoelectrode successfully created a new condition in which plasmon and visible light trapped in the titanium oxide layer strongly interacted.

When gold nanoparticles absorb light, the additional energy triggers electron excitation in the gold, which transfers electrons to the semiconductor. The light energy conversion efficiency is 11 times higher than those without light-trapping functions. The boosted efficiency also led to an enhanced water splitting: the electrons reduced hydrogen ions to hydrogen, while the remaining electron holes oxidized water to produce oxygen — a promising process to yield clean energy.