News Staff
A fearsome beast soared above the ancient, vast inland sea once that once covered covering much of outback Queensland. This newly found pterosaur, named Thapunngaka shawi, was discovered in Wanamara Country, near Richmond in North West Queensland.

It's the stuff of nightmares, with a spear-like mouth containing 40 giant teeth and a wingspan around 20 feet.

We may imagine it to be like a big bird or a bat but that is not so, according to University of Queensland doctoral student Tim Richards: "Pterosaurs were a successful and diverse group of reptiles – the very first back-boned animals to take a stab at powered flight.” 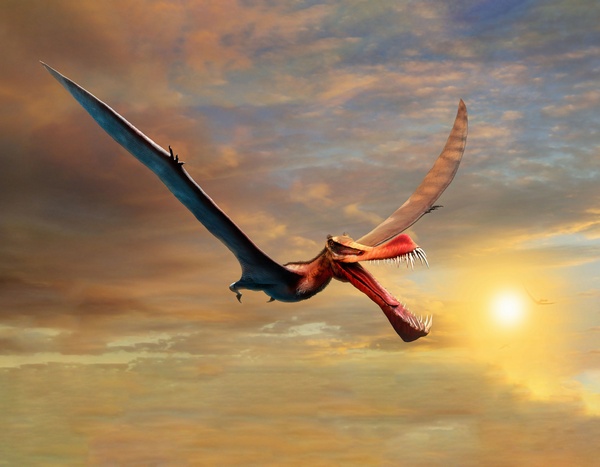 The new species belonged to a group of pterosaurs known as anhanguerians, which inhabited every continent during the latter part of the Age of Dinosaurs. Being perfectly adapted to powered flight, pterosaurs had thin-walled and relatively hollow bones.

Given these adaptations their fossilized remains are rare and often poorly preserved, but this is the third species of anhanguerian pterosaur known from Australia, with all three species hailing from western Queensland. The fossil was found in a quarry just northwest of Richmond in June 2011 by Len Shaw, a local fossil hunter who has been ‘scratching around’ in the area for decades, and why he gets credited in the name.

Co-author Dr. Steve Salisbury said what was particularly striking about this new species of anhanguerian was the massive size of the bony crest on its lower jaw, which it presumably had on the upper jaw as well. “These crests probably played a role in the flight dynamics of these creatures, and hopefully future research will deliver more definitive answers.”

Local people can see Thapunngaka shawi is on display at Kronosaurus Korner in Richmond.
News Articles
More Articles All Articles
About