News Staff
In the journal Monthly Notices of the Royal Astronomical Society and in a presentation at the European Week of Astronomy and Space Science in Liverpool, a team announced one of the largest 3D maps of the infant Universe.

And along with it almost 4,000 early galaxies, many of which will have evolved into galaxies like our own Milky Way.

Looking back in time: 16 different epochs between 11 and 13 billion years ago

Light from the most distant galaxies takes billions of years to reach us. This means that telescopes act as time machines, allowing astronomers to see galaxies in the distant past. The light from these galaxies is also stretched by the expansion of the Universe, increasing its wavelength to make it redder. This so-called redshift is related to the distance of the galaxy. By measuring the redshift of a galaxy, astronomers can thus deduce its distance, how long its light has taken to reach us and hence how far back in time we are seeing it.

Using the Subaru telescope in Hawaii and the Isaac Newton telescope in the Canary Islands, the team searched for distant galaxies emitting Lyman-alpha radiation using 16 different narrow and medium band filters over the COSMOS field, which is one of the most widely studied regions of sky outside our Milky Way, located in the direction of the constellation of Sextans.
By sampling particular wavelengths of light, they could examine specific epochs in the history of the Universe. 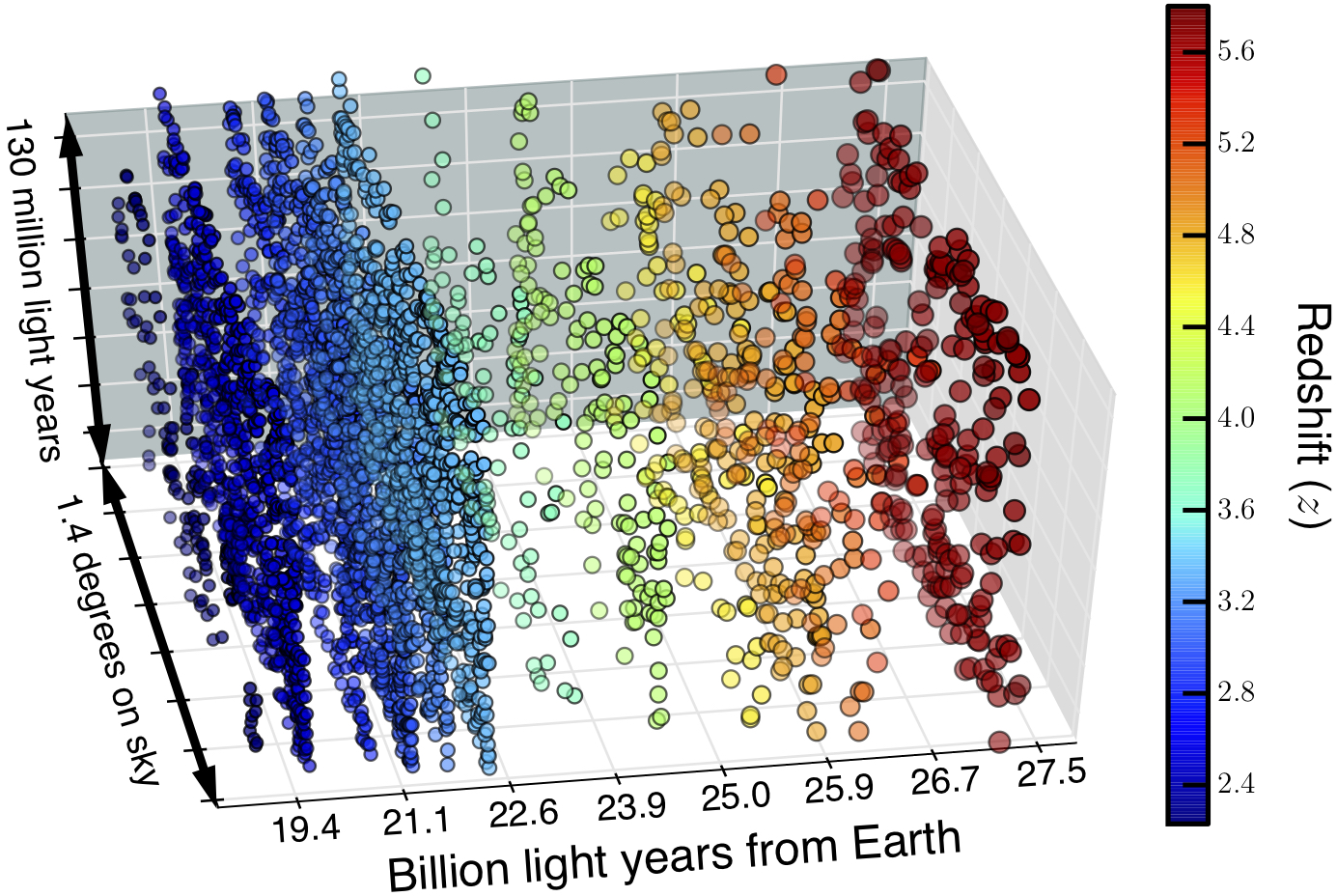 A map of the cube of spacetime covered in the new survey, showing the distance to the galaxies in billions of light years. The positions of the 4,000 galaxies appear as circles. The colours represent the degree of redshift seen, with the bluer circles indicating galaxies nearer to the Earth, and so less redshifted. Green, yellow, orange and red circles indicate successively higher redshifts, and galaxies that are progressively further away from the Earth. Credit: D. Sobral

They found galaxies that existed when the Universe was only 7 to 20 percent of its current age.

"These early galaxies seem to have gone through many more "bursts" when they formed stars, instead of forming them at a relatively steady rate like our own galaxy. Additionally, they seem to have a population of young stars that is hotter, bluer and more metal-poor than those we see today," says Dr. David Sobral of Lancaster University.

The researchers also found that these early galaxies are incredibly compact. The bulk of the distant galaxies were only about 3 thousand light years across in size, while our Milky Way is about 30 times larger. Their compactness likely explains many of their exciting physical properties that were common in the early Universe. Some of these galaxies should have evolved to become like our own and thus we are seeing what our galaxy may have looked like 11 to 13 billion years ago.

The data are now publicly available for other astronomers to make further discoveries.