News Staff
There is a rare condition in humans and other vertebrates where they genetically belong to one sex but also have characteristics of the other.

In medaka fish. sex reversal involves genetically female larvae (meaning they have two X chromosomes) going on to develop male characteristics, or vice versa. Scientists had already discovered that environmental factors, such as temperature changes in the brackish and fresh waters where medaka fish live, are likely involved in their sex reversal. 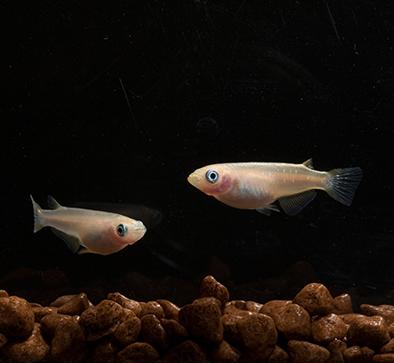 The new study wanted to see if nutrition also played a role. They starved medaka larvae for five days, enough time to affect their metabolism but not them. Three to four months later, the team examined the fish and found that 20 percent of the genetically female medaka had developed testes and characteristically male fins.

The same did not occur in larvae that were not starved.

Further tests showed that sex reversal in the fish was associated with reduced fatty acid synthesis and lipid levels. Specifically, starvation suppressed a metabolic pathway that synthesizes an enzyme called CoA, and disrupted a gene called fasn. These disruptions led to reductions in fatty acid synthesis. The scientists also found that a male gene, called dmrt1, was involved in the female-to-male reversal.

"Overall, our findings showed that the sex of medaka fish is affected by both the external environment and internal metabolism," says Nagoya University reproductive biologist Minoru Tanaka. "We believe lipids may represent a novel sex regulation system that responds to nutritional conditions."

The team next plans on identifying other internal factors involved in medaka sex reversal, such as tissues or organs that sense changes in the internal environment and then produce key metabolites to regulate sex differentiation.
News Articles
More Articles All Articles
About