News Staff
Schizophrenia can cause hallucinations, delusions, trouble with thinking and other behaviors that impact daily functioning. Though it affects less than 1% of the public, 60% of schizophrenic smoke cigarettes, a known carcinogen and risk factor for numerous diseases; a 500 percent increase over the general population, where smoking has plummeted thanks to greater awareness of its harms plus smoking cessation tools like nicotine gums, patches, and vaping.

In a small pilot study, scholars used a high-strength nicotine e-cigarette to modify smoking behavior in people with schizophrenia spectrum disorders who smoke cigarettes. The 40 adults with schizophrenia spectrum disorders who smoked and did not intend to reduce or quit smoking participated in a 12-week study using Juul e-cigarettes loaded with 5% nicotine pods with a follow-up visit at 24 weeks.

Researchers measured smoking frequency, smoking reduction, carbon monoxide expired air reduction, smoking cessation, and continuous abstinence 24 weeks after the study began and found that 40% of participants had stopped smoking traditional cigarettes by the end of 12 weeks. Researchers observed an overall, sustained 50% reduction in smoking or complete smoking abstinence in 92.5% of participants at the end of 12 weeks. Researchers also observed an overall 75% reduction in median daily cigarette consumption from 25 to 6, by the end of the 12 weeks. 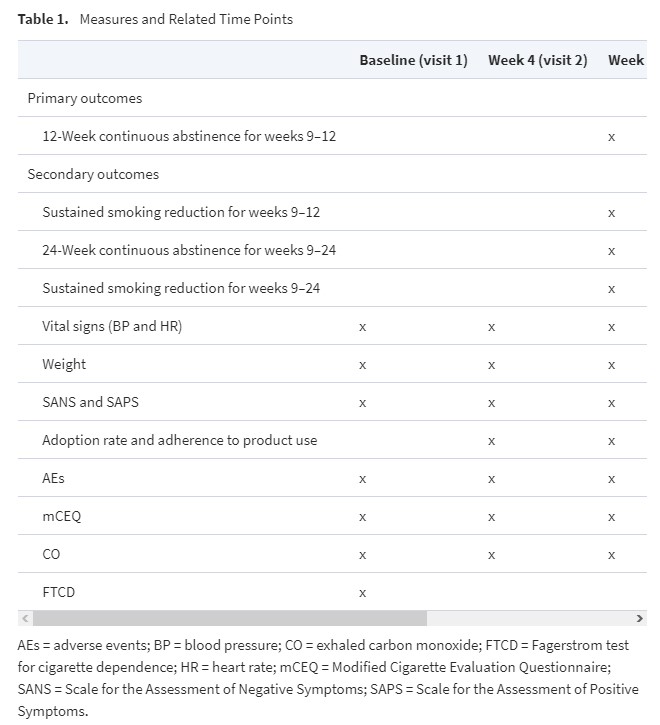 After six months, 24 weeks after the study began, 35% of participants had completely stopped smoking conventional tobacco cigarettes, while continuing to use e-cigarettes. Researchers here also measured a significant decrease in daily cigarette consumption was also confirmed at the end of 24 weeks. The study's authors report that 57.5% of participants reduced their cigarette usage by over 50%.

Additionally, researchers found that participants' mean blood pressure, heart rate and weight measurably decreased between the start of the study and the 12-week follow up. Positive and negative symptoms of schizophrenia were not significantly different after using e-cigarettes throughout the whole duration of the study. At the end of the study 61.9% of participants reported feeling more awake, less irritable, and experiencing greater concentration, and reduced hunger.
News Articles
More Articles All Articles
About