News Staff
A deficiency in Vitamin D on the mother's side could explain why Autism Spectrum Disorder diagnoses are three times more common in boys, but don't start buying supplements. This was in rats and rats are not little people, there is a lot of ground to cover before this has human relevance.

Low vitamin D in mothers is one of the many risk factors linked to Autism Spectrum Disorder, largely because it is a broad behavioral spectrum that has little scientific rigor in diagnoses, which means even less rigor in correlation. In the study, Professor Darryl Eyles and Dr. Asad Ali from University of Queensland found vitamin D deficiency during pregnancy caused an increase in testosterone in the developing brain of male rats. Vitamin D is important calcium absorption and most people get enough in their diets. In the United States, milk is fortified with it to offset declines that occur naturally during winter months.

Low vitamin D causes an increase in testosterone in the brain of the male rat fetuses, as well as the maternal blood and amniotic fluid, Professor Eyles said. "Our research also showed that in vitamin D-deficient male fetuses, an enzyme which breaks down testosterone was silenced and could be contributing to the presence of high testosterone levels." 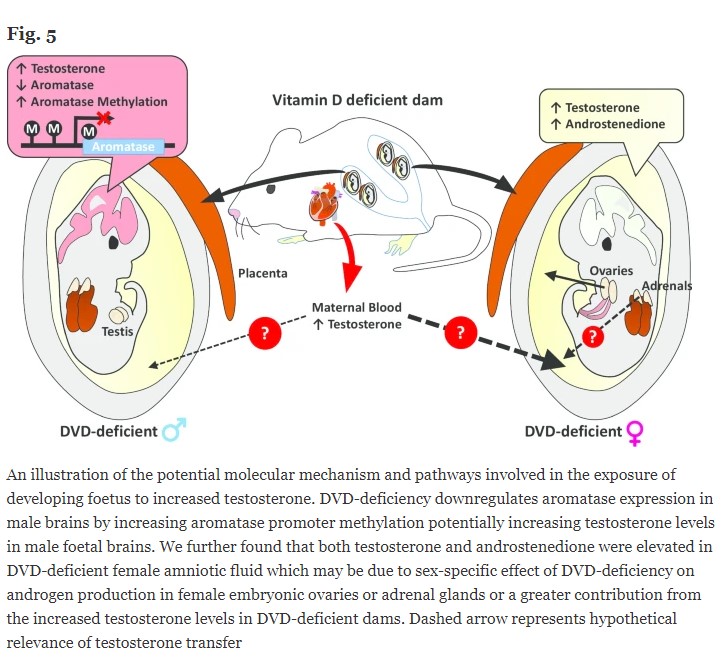 Giving vitamin D supplements to mice during pregnancy completely prevented ASD-like traits in their offspring, they found. Co-author Dr Ali said that excessive exposure of the developing brain to sex hormones like testosterone was thought to be an underlying cause of ASD, but the reasons remained unclear. "Vitamin D is involved in pathways controlling many sex hormones. When the rat mothers were fed a low vitamin D diet, it caused male foetal brains to have high levels of exposure to testosterone."

They show that a known risk factor for ASD alters testosterone in both the fetal brain and the mother's blood -- one possible contributor to why ASD is more prevalent in males.

"We have only studied one risk factor for ASD -- vitamin D deficiency during development -- our next step is to look at other possible risk factors, such as maternal stress and hypoxia - lack of oxygen - and see if they have the same effect," he said.
News Articles
More Articles All Articles
About