News Staff
Antarctica’s fourth largest ice shelf, the Larsen C Ice Shelf located on the Antarctic Peninsula, risks collapse due to mountain winds, according to a recent presentation at annual meeting of the European Geophysical Union.

The Larsen C Ice Shelf currently experiences the highest surface melt rates across Antarctica. And scientists speculate that melt rates have been increasing in response to strengthening circumpolar winds that result from ozone depletion and increasing greenhouse gas concentrations. Yet ozone has plummeted since the 1980s and western nations have all reduced emissions, so if greenhouse gases have instead accelerated some countries claiming developing nation status must be lying.

Circumpolar winds have always brought warm maritime air to the region so if those have increased the frequency and strength of warm mountain wind events known as foehn over the east coast of the Antarctic Peninsula, where Larsen C is located mean more warm air. The simulation found foehn winds drive the highest melt rates and govern the variability of melt across the ice shelf. 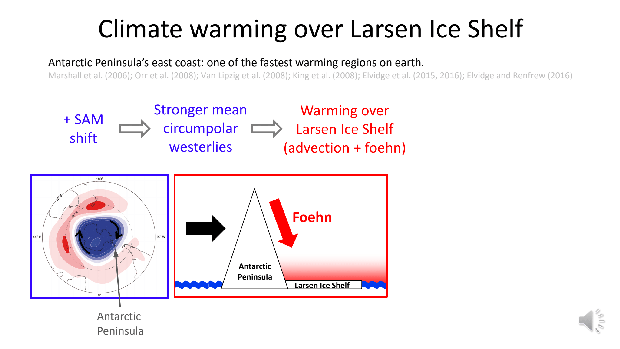 The recent computer model, using measurements of the ice shelf and atmosphere gathered between November 2014 to June 2017, claims climate change has increased the dominant control on Larsen C surface melt - the occurrence, strength and warmth of foehn winds. The most intense foehn-driven melt occurs in embayments, or inlets. Other models say these regions are now prone to melt water ponding, which is the precursor to hydrofracture, when crevasses are driven open by the weight of water generated by surface melt.  Some have said that is the mechanism which caused shearing in the nearby Larsen A and B ice shelves in 1995 and 2002, respectively.

According to their findings, the inlets of Larsen C experience the highest melt rates, and although foehn winds are seen just 15 per cent of the time, they account for 45 per cent of the surface melt.

“Foehn-driven melt on Larsen C is likely to increase in the future, with further strengthening of the circumpolar winds expected due to increasing greenhouse gas concentations," says Dr. Andrew Elvidge, a senior research associate in University of East Anglia’s School of Environmental Sciences. “This region is one of the fastest-warming on Earth and currently experiences the highest surface melt rates across Antarctica.
News Articles
More Articles All Articles
About