Bente Lilja Bye
This is not a rainforest!

A story wherein I reveal resistant and deliberate ignorance.

This is not a rainforest! I was told in a bar at Mabu Thermas and Resort, Foz do Iguazu, Brazil. 'This' referred to the National Park Iguazu wherein the resort we stayed at was situated. Admittedly that last sentence could lead you to believe I was enjoying an exotic vacation. I was not. I was attending the Group of Earth observations (GEO) annual plenary and a long series of other meetings. So after one of the never ending days of official and non-official meetings we finally gathered in the bar for some refreshments.

For the record, I was not under the influence of the local drink Caipirinha  although I might have tasted it. We, at this particular event, were a small group of people from Brazil, The Netherlands, Canada and myself from Norway. Brazil is for many of us almost equivalent to the Amazon, the biggest rainforest on Earth. Canada and Norway have both boreal forests, only Canada has a lot more of it than we do. And The Netherlands? Well, The Netherlands is all flat and situated below sea level. That is all I, a 'mountain monkey' (a derogative synonym for a Norwegian invented by jealous flatland Danes), can say.

Not fair, but true. My lack of knowledge about forests in The Netherlands, that is.

Returning to the bar scene. This is not a rainforest! was the Brazilian's spontaneous reaction to my casual but very favourable description of the surrounding rainforest. I proclaimed that I planned to take a stroll in this paradise rainforest at some point of time, no matter how busy our schedule was. I am not so easy to correct so I insisted it was a rainforest - relatively speaking.

I based my allegations on the fact that the forest, to me - a woman literally living in a boreal forest, looked just like the rainforest where one of my cousins live. In the rainforest slightly north of Cairns, Australia. The forest around Foz do Iguazu could easily be mistaken for the one around Cairns and it was definitely not remotely resembling my home forest. Ergo. 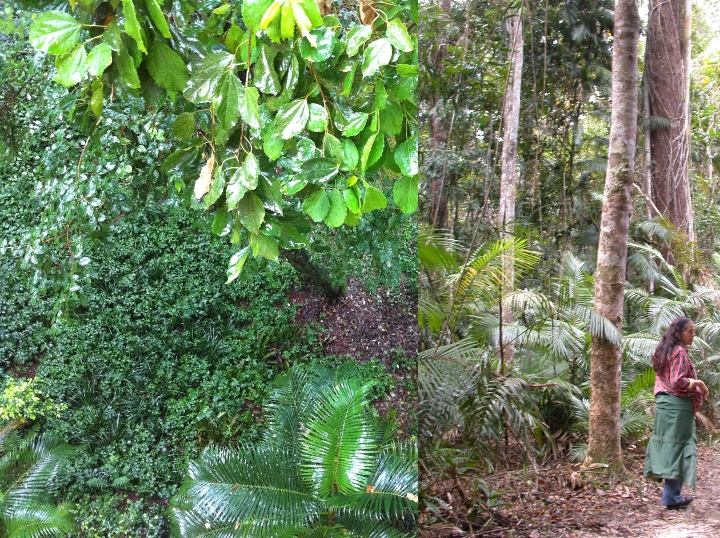 To me the two forests in this picture look very similar. The Atlantic to the left and the rainforest in Cairns to the right. Credit: BLB

My relativism was not accepted. The Brazilian expert stubbornly upheld it was an Atlantic forest and that this area was way too cold to be a rainforest! That last part did definitely not make any sense to me whilst it was warmer than 35 C outside. . But of course the Brazilian was right. The GEO plenary was held in one of the Alto Paraná Atlantic forests. In my defence though, I will add that I was not the only one at that meeting who described the area as a rainforest. 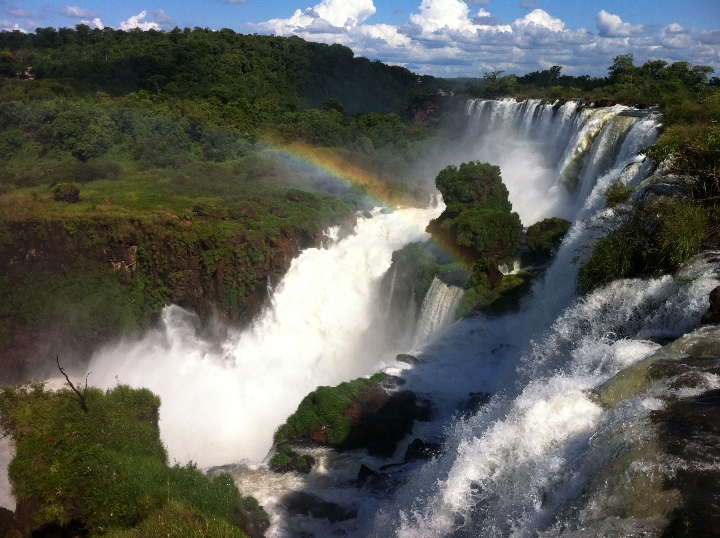 Foz do Iguazu is very much like paradise. Only it isn't in a rainforest but in an equally beautiful Atlantic forest. Credit: BLB

Fortunately, not all Norwegians are as ignorant with respect to forests as I am. The Norwegian government donates tons of money for the purpose of preserving the rainforests – the real ones. In 2007 the Amazon Fund was established with Norway as the first and biggest contributor. Currently tons of money equals a whopping 447 Million US $ in the Amazon Fund (out of a total of 478 Million US $) supporting numerous projects run by experts.

This is not a rainforest – anymore. Or deforestation if you like.
In his welcome address at the GEO plenary in Foz do Iguazu, Director General Leonel Fernando Perondi (Brazil's National Institute for Space Research - INPE) obviously mentioned deforestation. The issue being of great importance not only to Brazil but to the entire world.  Deforestation in the Amazon is still not combated, but a significant drop in the yearly rates, from 27000 km2 in 2004 to 6500 km2 in 2011, has been achieved thanks to programs run by organizations such as INPE. Dr. Perondi expected GEO to contribute to better management of the rainforests. Personally, I'd say that not only will GEO contribute to the work of INPE and their rainforest management programs in the future, but it has already played a significant role. 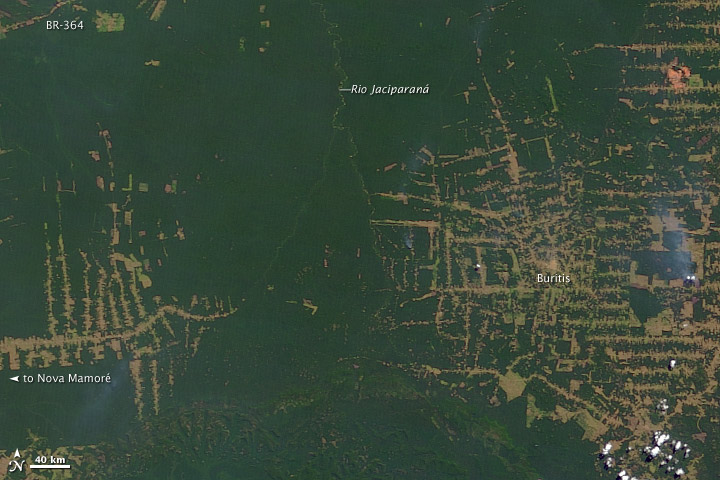 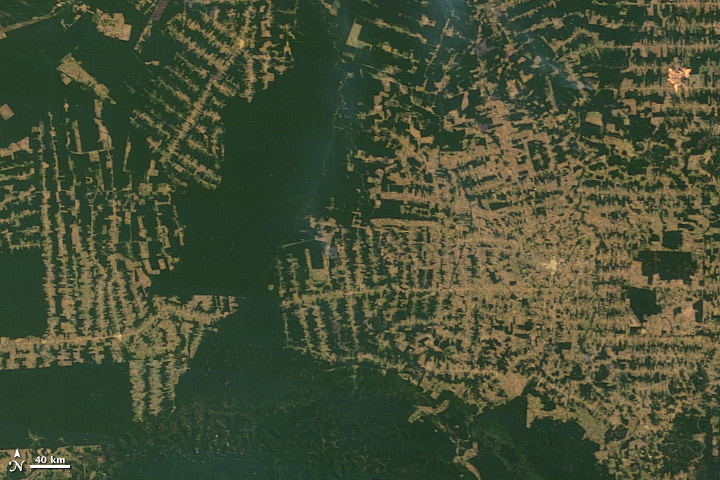 Global Forest Observation Initiative – GFOI
The link between rainforests and climate change is well known. But it is not only the rainforests that are important for us. In general healthy forests are critical for human well-being. Forests, which covers about 30 % of the land surface, support local communities and provide numerous essential ecosystem services, including clean air, flood control, biodiversity protection, food and medicines, materials and of course carbon storage. Acknowledging this fact GEO facilitates a number of activities supporting forest management. Significant efforts have been made to establish the Global Forest Observation Initiative – GFOI.  The ultimate goal of this initiative is to establish operational systems that are tailored for each nation/region. The development of the GFOI is being led by Australia, Canada, Japan, Norway and the United States. We are not quite there yet, but steadily approaching as reported at the GEO plenary in Brazil.

Space based observations are pivotal for global monitoring of the planet, but so are in-situ or ground based observations. A key challenge for GEO and its members in the coming years will be increased access to and sharing of in-situ data. With this very article I might have disqualified myself as a reliable in-situ forest observer, insisting that an Atlantic forest is a rainforest and all. Luckily, there are plenty of others who are qualified and more open to reduce their ignorance! 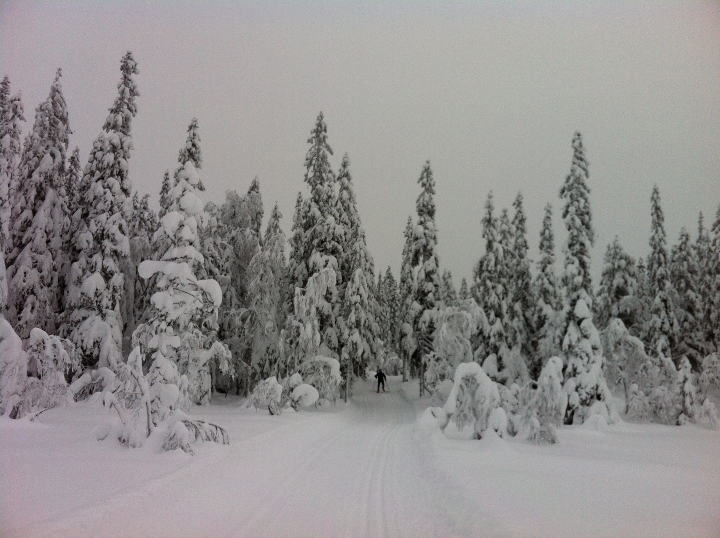 I may lack knowledge about rainforests, but I certainly know my boreal forest. This is from a magical moment at Krokskogen, the forest I actually live in. You'll see plenty of Trolls here at dusk and dawn, rest assured. Credit: BLB

The author works at BLB and with support from the Norwegian Space Center she contributes to GEO in capacity of being a Task Coordinator for one of the 26 tasks of the GEO Work Plan, building the Global Earth Observation System of Systems.