Our cabin is situated in one of the most remote places in Norway. My family got the place in the early 60ties and at the time there were no roads leading to what then was a fox farm kitchen. It is still one of the most remote areas of Norway. I grew up listening to the stories about the hardship of life in what for us was a recreational haven. The most exciting stories were about the predators, brown bear and wolves, that were roaming around our cabin. These wildlife observations were an integral part of the folklore and for the most part only recorded as part of the storytelling around the dinner tables and at festivities when people gladly told colorful tales from their hunting and fishing adventures. 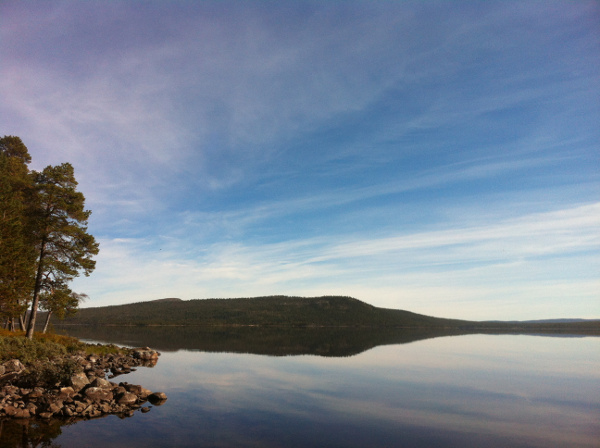 Our family cabin is situated in one of Norway's most remote areas. Here is the lake Istern where we get our drinking water from. Hand carried. Photo: B. L. Bye

Then, one day I made my own observation. A lone wolf crossed the road a couple of hundreds meters from our cabin. By then, the authorities had established a system for recording these types of observations. The local hunting authority, normally one person living in the area, was the point of contact one reported to and who entered the information into the official data base. I remember we made some efforts to get hold of the person, whom we all knew of, so that he could report it. I was a citizen observer. My contribution was one observation of a wolf.

My wolf story illustrates that the concepts of citizen observers and citizen science are not new. However, citizens observatories and citizen science is now wildly different. With the advent of internet and smartphones alone, the amount and quality of observations have become several orders of magnitude better.

Fast forward in my life, I am currently involved in citizens’ observation in a more professional way. As an astrophysicist I have of course noted the great success of Galaxy Zoo, but since I have turned my head towards the Earth and worked on nitty gritty parts of Earth observations, you know data management systems and such, I have not been able to afford time to galaxy classification work. It is in-situ or ground Earth observations and their integration in larger observing systems in an interoperable and controlled way that is my professional concern today. The combination of spontaneous mapping by citizens like what happened in Beijing 2012, and authoritative data is of particular interest to me. But I do have a private life as well.

As a citizen of the world

Being a busy bee globetrotting to save the planet, I have the recent years wondered if I could take part in one of these data collection projects. By the way, if you think I am inconsistently using different words like ‘citizen science’, ‘citizens’ observatories’, ‘citizen observer’, that is done deliberately. There are numerous names on the phenomenon with only nuances in actual meaning. Crowdsourcing is another one, and with my love for gadgets of all sorts and all the travel I on more than one occasion thought that it would be fun to contribute with data. With more than 1 observation of 1 wolf! It turns out to be rather cumbersome to find the information in a sufficiently efficient way for this busy bee. And I am not even starting from scratch. Here on Science 2.0 we have project Calliope by Sandy Antunes. He used Kickstarter to raise funds for his nanosatellite. I did contribute to that with funds, which is just one way of participating in citizen science.

I figured there must be more people than me who would like to be able to participate in crowdsourcing, a citizen science project or citizens’ observatory or what have you, without stress or too much hassle. It looks like if you are part of the educational system it is somewhat easier, but I imagine there are a number of people who are interested in science and technology but not fully integrated in any educational or research system and thus not exposed to the possibilities at hand. People like the readers of Science 2.0 for instance.

I decided I would try to organize the information I have collected, basically for professional reasons, and make it available in an easy digestible way for the interested citizen.

The question is then: what would an interested citizen, say you, like to know about citizen science and citizens’ observatories? And what would you actually want to do?

I have made a little survey and kindly ask you to tell me. In return you’ll get a couple of information gifts (yeah, those are pdfs) that you should find useful and/or interesting saving you some internet search time.

Oh, I watched the movie Starsky&Hutch, the Ben Stiller/ Owen Wilson version the other night. So maybe I rather will say as the Ben Stiller character says towards the end of the movie, in his ‘Texan cowboy style’ : DO IT! DO IT!

Or perhaps you prefer the Pulp Fiction version (Samuel Jackson):

Pretty please with sugar on top! Fill in the survey!