Warren Davies
Some researchers have proposed that, because people can get through money certain things they can get through acceptance, money might act as a substitute for social acceptance. Since social distress and physical pain seem to have similar underlying mechanisms, a few interesting experiments have been done to test this idea. One study reports six experiments, which I'll summarise briefly here. 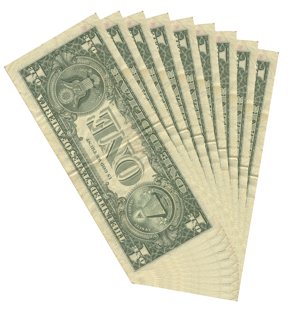 Money and pain might be linked (not just through paper cuts)

Participants got together in groups of 4. They spent 5 minutes breaking the ice, then were led to separate rules and asked who they wanted to work with as a pair on an upcoming task. The researcher came back a little later, and randomly assigned the participant to one of two groups (method of random assignment was not mentioned). Either everyone wanted to work with them, or no one did.

So social rejection appears to increase the desire for money, although maybe it's negative emotions generally rather than rejection.

I love priming research. Just being exposed to words (sometimes so quick they are below conscious awareness) can have measurable effects on behaviour. Makes you wonder how much you're being influenced by advertising and such as you go about your life (hope you're enjoying the subheaders by the way!).

So money and rejection might be linked, what about money and pain?  They might too.  Exposing people to words like headache, sore, and pain caused increased desire for money, as indicated by the coin task and the giving up pleasures task. So as expected, social rejection and physical pain both seem to trigger desire for money, or priming related to pain at least.

Participants were first asked to "test their finger dexterity", by either counting money, or plain paper. They they played a computerised ball tossing game (Cyberball), which they thought they were playing with other people by computer link-up, but really was a simulation. For some people, the computer included them, for others, it started excluding them from the game after 10 throws (never trust a psychologist. They're always up to something). Measures were taken of distress, positive and negative affect, and self-esteem.

What happened? People who had just counted money reported less distress and higher self-esteem after just being excluded. Maybe that's why Scrooge took so long to change his ways - the money was a slight buffer against exclusion.

I'm probably going to put people off of ever taking part in psychological research by writing this.  Another test of money and pain, similar set up to last time.  Participants (or should we call them subjects?) counted money or paper, this time followed by a pain task - hand immersion in water at 50 degrees C. Then they rated how painful it was and took a mood scale.

Counting money prior to the task reduced self-reported pain. So now you know what to do before your next flu jab. There was no overall effect on mood.

Losing money, and being rejected

Maybe the previous results were due to being distracted by the money. To test this, the researchers tried to bring up feelings of losing money, and then exposing people to rejection (Cyberball again). Half of the participants wrote about what they'd spent recently, half wrote about the weather.

As you're expecting by now, distress from Cyberball was higher in people who had just been writing about their expenditures. This also goes along with the main idea that money can be a proxy for social acceptance - soon after it's gone (or you perceive it as going), the sting of rejection hits you harder. Unemployment must be a tough time.

These studies fit the general idea that money helps people to cope. Maybe it gives you a sense that, if something went wrong you'd be able to handle it, in much the same way that having close friends does. Since social rejection and physical pain seem to be closely intertwined, this proxy effect seems to carry over to that, too. Note that it's a general sense of being able to cope that money provides, because in none of these studies would money be any help at all (unless you pay people to throw balls to you). And the effects seemed to be specific to rejection and pain, as the mood scores were not affected by the tests.

It's interesting that we can be influenced subtly by symbolic and abstract things like money (or thinking about money). If these results are correct, and because of the repeat occurrence of the words 'pain' and 'rejection', presumably most people reading this article will be feeling a stronger desire for money right now than the people who chose a physics one. Maybe you're one of them.