Laura Hult
Although possessing an undeniable bias against consciousness and mood altering drugs, courtesy of the 1960s and 1970s, I was curious to see what progress had been made utilizing these same substances to treat addictions.  Allegorically, we have vaccines derived from pathogens to prevent disease, thus grudgingly but also with a bit of morbid fascination, I can admit that hallucinogens and their derivatives might be effective in treating some individuals with certain addictions, and precedence seems to support this hypothesis.

Similarly, Howard Lotsof’s work with ibogaine, though severely limited by budgetary and social constraints (Abrams, M., 2005), suggested that this hallucinogen might also be an effective tool in combating life-destroying addictions.

Today, neurobiochemists are unlocking the intricacies of addiction with hopes of finding socially acceptable therapies.  18-methoxycoronaridine (18-MC), structurally similar to ibogaine yet derived from vincristine, may very well be one such device, and should be rigorously investigated towards that end, particularly as it does not appear to possess hallucinogenic properties or significant adverse physical effects.

Abrams’ 2005 article however, does not go beyond providing very basic information to the reader, with significant details and connections left to the imagination.  For example, the brain regions containing 18-MC receptor sites were not specified, nor were the anatomical relationships between the medial habenula, habenula-interpeduncular pathway, and the unnamed receptor sites clarified.

To satisfy my curiosity, I found structural images of vincristine, ibogaine, and 18-MC for comparison.  The similarities explain why Glick selected vincristine as his original source for derivatives, for it does appears that the functional group could be cleaved from the remainder of the molecule.

Finding information on the anatomical relationships between the medial habenula and the habenula-interpeduncular pathway proved a somewhat more daunting task, but I did uncover some schematic drawings of rat brains, and used the following diagram to discover the location of these structures as being very near to the cerebellum and brain stem. 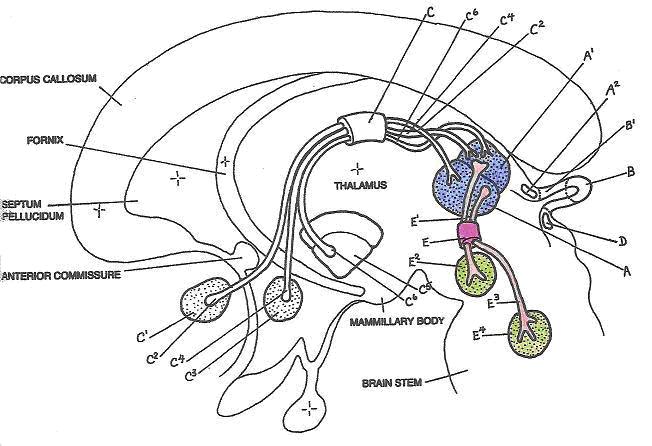 Dr. Glick’s team has identified α3β4 receptors in the medial habenula and interpeduncular nucleus as sites blocked by 18-MC.  That α3β4 receptors occur only infrequently in other areas of the brain gives additional support to Glick’s original hypothesis that the medial habenula operates as a secondary, or dopamine-modulating reward system (Glick, S.D., 2002-2004, Freedlander, J., n.d.).  Recent research indicates that 18-MC may also be useful in the management of a host of other addictive substances including nicotine, cocaine, and dextromethorphan (Glick, S.D., 2002-2004).

In conclusion, although 18-MC has origins from within the hallucinogenic drug culture, this should not dissuade the scientific community from taking advantage of its unique properties by beginning trials with humans.  We are losing the War against Drugs and our society suffers from diverse addictive behaviors, many of which could possibly be controlled by blocking α3β4 receptors and thus limiting the dopamine response intimately connected to the development of such addictions.  If 18-MC indeed prevents the release of unnaturally vast quantities of dopamine in humans, regardless of the type of substance used or behavior practiced, Stanley Glick and his associates may have discovered the key to the management of addictions in general.

As a paramedic working for many years in the Chicago metropolitan area, I witnessed firsthand the devastating and lasting effects of trauma not only...