Tommaso Dorigo
This morning I attended the first session of the Physics in Collisions conference in Kobe, which dealt with Electroweak Physics. The four talks I could listen to were all of very good quality, and I am not ashamed to say that I did learn a thing or two, despite this is a field of investigations on which I have focused for over a decade. Also, I decided that conferences featuring few, long talks are definitely better than ones which try to cram dozens of small contributions in tight schedules: at least, the session conveners are not required to play the watchdog and struggle to keep people within their allotted time, and post-talk questions and comments are actually encouraged rather than suppressed.

The conference venue is the Centennial Hall in Kobe University, a building on the slopes of Mount Rokko which sports a wonderful view on the bay area: 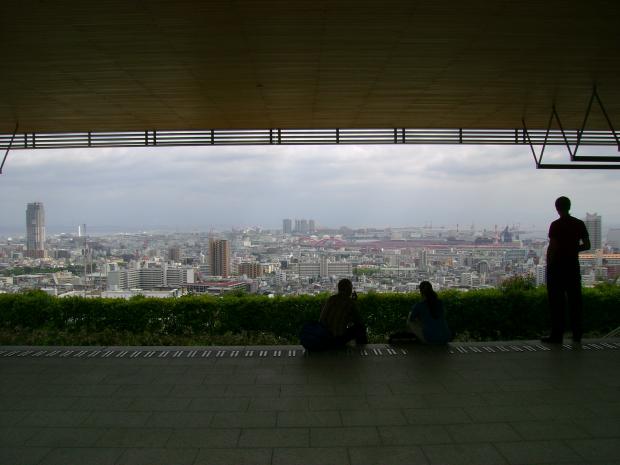 The interior of the hall is also quite remarkable. Here is the ceiling: 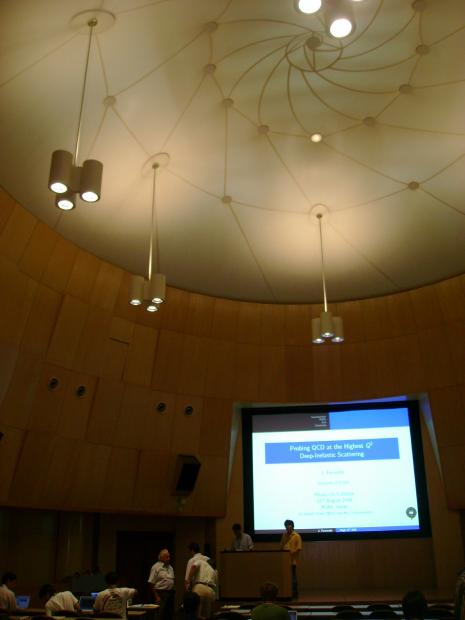 But let me try to summarize the talks. The first one was given by my colleague Bernd Stelzer, who discussed Top quark measurements. Bernd reviewed in detail the most precise measurements of top quark production cross section, mass, and properties produced by the CDF and Dzero experiments at the Tevatron, and then gave some highlights of the potentialities of the LHC in top physics. In my notebook I have scribbled the following annotations:


After Bernd, Pierre Petroff talked about W and Z production and properties. He gave a very nice talk. Here are some notes:


After a well-deserved coffee break, I got to hear about Multi-boson production by Paolo Mastrandrea. It was quite pleasing to see the quality and wealth of recent results from the Tevatron on this topic. Among them, Paolo showed the first observation of ZZ production by CDF, which is the effort of a student in Padova, Matteo Bauce.

Matteo followed my course on Subnuclear Physics last fall in Padova, and I am both happy and envious by seeing he has achieved an important new measurement in CDF during his undergraduate thesis studies: this is indeed quite a feat! I am certainly happy for him and for Padova, as well as for seeing this measurement from CDF; but I am also envious because I had originally hoped he would rather choose a thesis on the CMS experiment, and thus come to work with me. I would have been able to offer him a much less exciting study, based on putting together an analysis we cannot yet perform, having no real data to run it on. Of course his choice was good: the data that CDF has acquired and is still collecting can and will provide a reason for years of more studies, so students can still profitfully invest their time there, rather than flocking to LHC.

The final talk in the morning was given by Denis Bernard, who discussed the difficult topic of Hadronic contributions to the measurement of the muon anomaly, the so-called "g-2" measurement made by Brookhaven. I already discussed elsewhere this measurement and its implications (also see this nice two-part article); I will just draw from the conclusions of Bernard's talk that despite a new extremely precise and beautiful measurement by BaBar, the discrepancy between theory and experiment on this particular quantity remains at the 3-sigma level.

Bernard had not finished spelling that he evaluated it at 3.3 standard deviations, when a listener from the audience mentioned that tomorrow a paper will appear on the Arxiv, where that very number is now estimated at 3.1 standard deviations. The g-2 remains a quantity to watch closely, especially since new physics is expected to contribute to its value appreciably. This could indeed be the place where Supersymmetry first makes its appearance -or, if you are a sceptic like me, the place where Susy enthusiasts will receive another burning disillusion.
A Quantum Diaries Survivor
More Articles All Articles
About