Tommaso Dorigo
Despite the hopes of most and the preconceptions of many, news from the Lepton-Photon conference in Mumbay, India, report that the Standard Model is as alive and strong as it has ever been. Indeed, the recent searches for Supersymmetry by ATLAS and CMS, now analyzing datasets that by all standards must be considered "a heck of a lot of data", have returned negative results and have placed lower limits on sparticle masses at values much larger than those previously investigated (by experiments at the Tevatron and LEP II).

Similar is the tune being sung on the B-physics sector, now being probed with unprecedented accuracy by the dedicated LHCb experiment (along with again precise measurements by ATLAS and CMS, plus of course the Tevatron experiments). I have not reported on those results here yet, but will duly do so in the next weeks. In a nutshell, anyway, deviations from the Standard Model predictions are all well within one sigma or two; the hypothetical contribution of SUSY particles in virtual loops taking part in the decay of B hadrons must be very small in order to fit in this picture.

A poignant question is in the air and must be asked. Do those results shake the confidence of those particle theorists whose beliefs in the correctness of Supersymmetry are strongest ? What do those physicists think today ? 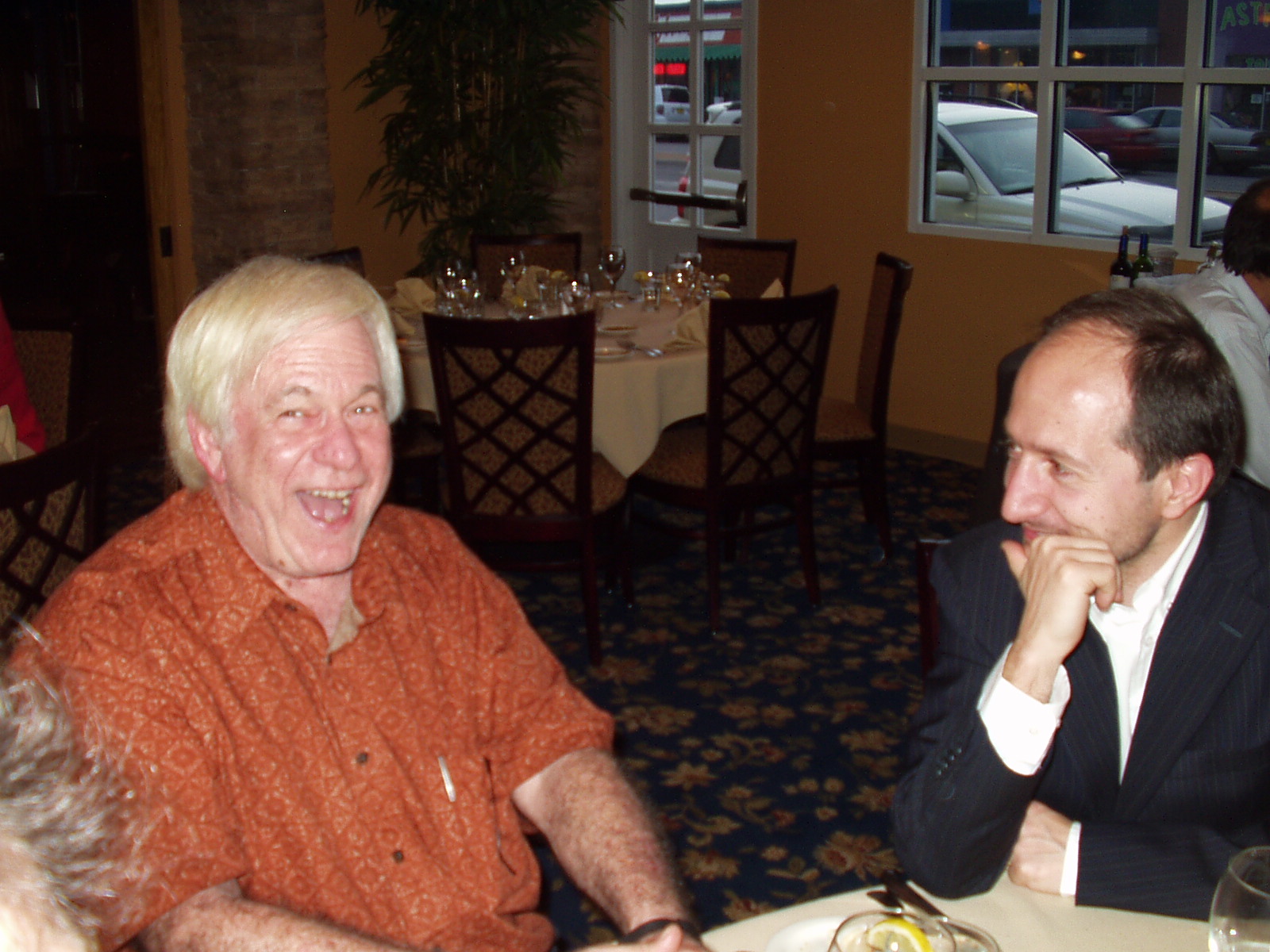 I decided to pose this question to Gordy Kane, a leading particle theorist and advocate of Supersymmetry. Prof. Kane is not only the author of countless scientific papers and several books on the topic, but he is one of the true fathers of Supersymmetry, in particular its "minimal" version, the MSSM. I had the pleasure of meeting Gordy at a PASCOS conference in Albuquerque three years ago (the picture on the right portrays us at the conference dinner). He graciously agreed to write a couple of paragraphs for me -i.e., for us. Here you are:

I thought it was worthwhile to comment a little on recent LHC searches, since they have led to a number of surprising statements. First consider gluino searches. The results of a search for gluinos are very sensitive to squark masses. Theoretically the only well motivated values for squark masses are very large, tens of TeV, because they are generically predicted in compactified string/M-theories when the associated moduli satisfy cosmological restrictions. Then (a) the gluino production rates are considerably reduced, and (b) the decays or gluinos to 3rd family final states dominate. Existing gluino searches cover this region poorly. The current limit on gluino masses is not above 500 GeV. Whether the squarks are indeed so heavy is not the issue, the point is that if they are the limits on gluino masses are smaller than is often stated. I and others expect this decay to tops and bottoms is the signature by which gluinos will be found, with masses well below a TeV.

Second, when squarks are heavy the two doublet Higgs sector is an effective single doublet since the heavy partners decouple. There is a single light Higgs boson observable. If the gauge group of the theory is the MSSM one then the Higgs mass is between about 115 and 128 GeV (essentially a function of the parameter tan(beta)). It will not be above that range. It has the SM production rate. The LHC searches are not yet sensitive to this region, and should not yet have seen a signal, so not seeing a signal does not allow any meaningful conclusions about Standard Model or MSSM Higgs bosons.

I am happy to see a definite prediction by Gordy on where the gluino should be. I think we have a chance to see the decay of gluinos to third generation particles at the LHC if gluinos exist, but we'll have to be patient for a while longer...

As for the Higgs, of course the null results on MSSM Higgs boson searches so far are much less worrysome to SUSY supporters. When we eventually see a Higgs boson signal (and I concur with Gordy that the mass will be in the range he quotes) deciding whether it is a SM or SUSY Higgs boson will in fact turn out to be quite a tough nut to crack.

Addendum: Gordon wishes to add a couple more remarks on the above, where he basically counters my comments. Enjoy:

It will be easy to tell h is the supersymmetric one since superpartners will also be found.  The generic prediction that scalars are heavy also implied that no deviation from the SM should be seen in b physics.

That's nothing less than we would expect from a SUSY advocate, wouldn't we ? ;-)