Is The Constrained Minimal Supersymmetric Extension Of The Standard Model Written Off Yet ?
By Tommaso Dorigo | May 11th 2012 05:23 AM | Print | E-mail

Tommaso Dorigo
Today I read with pleasure a paper on Supersymmetry which is surprisingly well written and clear. I can only warmly advise anybody seriously interested in the phenomenology of SUSY (in particular, the version called "constrained minimal supersymmetric extension of the Standard Model", cMSSM for friends) to give it a close look.

The cMSSM is a very attractive "minimal" option to extend the Standard Model with a minimal addition of parameters (still, quite a few, as in any Supersymmetric theory). Its appeal lies in the fact that one may basically study the resulting predicted phenomenology by just investigating five crucial parameters.

The paper is nice because it keeps the discussion at a reasonably simple level, and it gives no previous knowledge for granted. You therefore may know nothing about SUSY and read it back to back without trouble. Authored by Diptimoy Ghosh, Monoranjan Guchait, Sreerup Raychaudhuri, and Dipan Sengupta, it is titled "How Constrained is the cMSSM ?". You may find it on the arxiv as preprint 1205.2283.

Authors analyze the present status of experimental measurements and searches: this of course includes especially direct searches for SUSY particles at the Large Hadron Collider, but also the typical inputs coming from the searches for rare B decays (which are still dominated by the LHC experiments anyway) and the g-2 anomalous magnetic moment measurement. Plus, of course, the Higgs boson, which however authors do not seem to take very seriously yet. In fact, on page 23 they so comment:

"Perhaps the strongest constraints on the cMSSM will eventually come from the most tenuous of the existing empirical information, viz. the hints for a 125 GeV Higgs boson."

Here I beg to differ! Most SUSY parameter space constraints come from 95% confidence-level upper limits on sparticle cross sections, or unseen rare decays. 95% CL now is, in standard-deviation units, a bit less than two sigma. This means that authors routinely take seriously 2-sigma claims (of non-existence of SUSY particles); yet they call "the most tenuous of the existing empirical information" the over three-sigma evidence presented by ATLAS and CMS for a 125-ish GeV Higgs boson ?! (Not to mention that the 3-sigmaish g-2 discrepancy from SM predictions is given quite some emphasis in the paper as well).

Perhaps the choice of giving little emphasis to that experimental datum hides the authors' fear that the Higgs, once found at 125 GeV, will kill by itself a very large swath of parameter space points of the cMSSM: indeed, they note:

"[...] a light Higgs boson with mass somewhat higher than 123 GeV would require us to invoke portions of the parameter space which have been left unexplored in the present work, such as very high values of A0. Here, every GeV counts – an increase in the light Higgs boson mass by a single GeV would rule out large swaths of the parameter space and vice versa."

Apart from the Freudian slip of minimizing the present evidence for the Higgs by LHC, authors maintain a good balance throughout the paper. Maybe I can quote a couple of other strong statements, though. The first is on p.11:

"Even if the LHC completes its run without finding any signatures of the cMSSM, we will still be able to argue that the neutralino (albeit a heavier one than we now think) is the main component of the dark matter"

, which is like saying "you will never get rid of us!". Technically this is true, but I predict that if no SUSY is found post-LHC the arguing in favour of the neutralino being the stuff that dark matter is made of will move fewer research funds. Maybe we will not get rid of SUSY enthusiasts, but we can at least hope we'll starve them ;-)

The second statement that surprised me a bit is the following, found at the start of the Summary section (p.22):

"the cMSSM is arguably still the best option where extensions of the SM are concerned, and that one should have convincing empirical proof of its demise before other supersymmetric models can be taken seriously." (the boldface is mine).

Hear that, aficionados of the non-universal MSSM, of fancier SUSY models, etcetera etcetera ? Stay put. Your time will come only after the cMSSM is proven dead!

Finally, another minimizing statement is on p.24:

"All in all, if we consider all the serious empirical evidence available at the present juncture, the cMSSM is still in pretty good health, even though some extremities of the allowed parameter space have been lopped off."

Some extremities ?!? This is wishful thinking, and in stark contradiction with figures they themselves show in the paper -such as for instance the one below, showing how not only the LHC, but also other B physics measurements alone have pushed the allowed value of squark and gluino masses quite far up. Note that the figure is constructed in a way that the 2-D plane encompasses the range of parameter values that authors themselves are willing to consider in the paper as the natural house of the cMSSM. 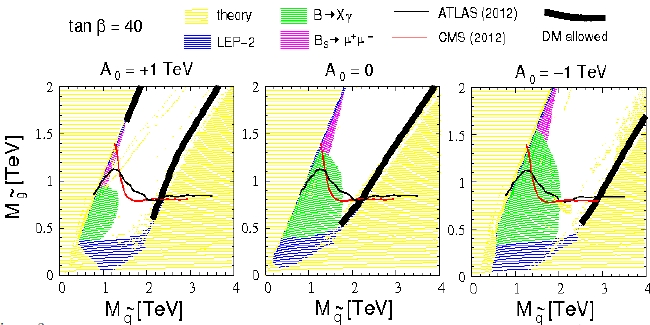 Apart from the above, as I already said above the paper is very well written. Besides giving a clear overview of the health status of the cMSSM, authors provide suggestions for how to investigate more of the parameter space at present-day experiments. Since I am such a darn nit-picker, however, let me add something at the end.

1. Authors, who express themselves in elegant and flawless English, appear to believe that the expressions "a priori" and "a posteriori" come from French or something, if one judges by their consistent imposition of an acute accent on the "a". It is Latin, folks! No accents please!

(But I should say that on this count authors are in good company: I was reviewing a draft paper the other day, and I found the Latin expression "vice versa" spelt "vis et versa", OMG!).

"A Higgs boson discovery, while vindicating this picture, will be only the start of the real search for supersymmetry, since it will not only make supersymmetry a theoretical necessity, but also provide crucial information on the corner of parameter space in which to search for the Higgs boson."

Omitting to say what I think of the "theoretical necessity", I only mention that here authors probably meant "for SUSY particles", lest the sentence makes no sense at all.

In any case, my congratulations to authors for a very clear article - a nice change from the standards we are accustomed to nowadays!
A Quantum Diaries Survivor
More Articles All Articles
About