Tommaso Dorigo
The ICARUS collaboration - operating a neutrino detector sitting not far from the OPERA experiment in the underground Laboratori del Gran Sasso in Italy - produced a refutation of the superluminality of neutrinos a while ago. That refutation was based on studying the energy spectrum of the neutrinos in the CNGS beam, coming from CERN through a trip of 700 km under the Earth's crust: superluminal neutrinos should have lost some energy due to electroweak radiation, which was not borne out by the data.

The early analysis was only a partial refutation, because one could conceivably argue that superluminal neutrinos possessed additional properties to make them free of the need to comply with electroweak physics. So one could think that the neutrinos detected by ICARUS were also superluminal, but they had not radiated the energy that ordinary Standard Model particles would have, under the same circumstances.

Now, however, ICARUS puts a tombal stone on the whole business. This comes at a time when OPERA has explained they have additional systematic uncertainties in their timing measurement, which will require more time to be tracked down fully. We obviously do not need to wait for that now, since the ICARUS result is perfectly in line with neutrinos being traveling at the speed of light, as they should. Note, neutrinos are massive, but their mass is so small that the difference with a particle moving at exactly the speed of light in vacuum, with a 700km baseline, cannot be detected with our clocks.

The rewsult is described in the paper produced today in the Cornell Arxiv, 1203.3433. The money plot is the following one: 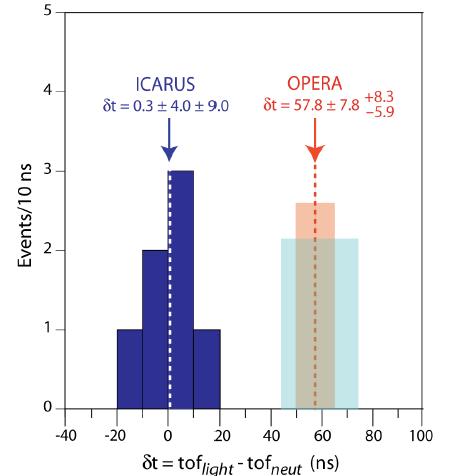 As you can see, the ICARUS result is as expected clustering at δt near zero (where zero means the arrival time of particles moving at the speed of light), while OPERA stands out as a wrong result. As expected.

Now, if your prior belief were that neutrinos may or may not be superluminal, with 50% chance to each hypothesis, you might argue that the two results above are inconclusive: their statistical power is similar, and so the fact that each agrees with a different hypothesis puts the matter in the "totally undecided" field. So people who have argued that scientists are too enamoured with their prior beliefs (of the correctness of basic theory against extravagant variants) may continue to believe that neutrinos are superluminal, that OPERA is correct, and that the ICARUS result above is the wrong one. But I hope that readers of this blog know better...