Tommaso Dorigo
A long awaited confirmation that direct CP violation occurs in Bs mesons (particles composed of a b- and an s-quark) not unlike what happens to lighter mesons (the K0, the B0, and the D0) is coming from LHCb. In an article appeared yesterday in the Cornell arxiv, LHCb describe their measurement of direct CP violation in the decays of both B0 and Bs mesons to Kπ final states (a kaon and a pion). The former is now the best precision measurement we have of the phenomenon, the latter is also the most precise bid (only one former measurement of the effect exists).

The LHCb experiment operates at the CERN Large Hadron Collider, where it analyzes 7-TeV proton-proton collisions (this year these will be 8 TeV ones) to study with high precision the physics of B mesons. LHCb is a lesser-known cousin of the media-attracting ATLAS and CMS experiments, because it is not meant to directly find new physics at the high-energy frontier, but rather to search for it in the lower-energy phenomena involving b-quark properties. And there is a lot to study there.

The reason why LHCb is insensitive to high-energy collisions is due to its physical location on one side of the interaction point: the detector studies only events where the center-of-mass is moving in its direction, i.e. ones which were highly asymmetrical. This occurs when a quark or a gluon in the proton, carrying a sizable fraction of the total proton momentum, hit a quark or gluon in the opposite-moving proton which carries a much smaller momentum fraction. Such asymmetrical collisions provide an effective energy in the center-of-mass system which is advantageous for the copious production of b-quark pairs. The large boost of the resulting B hadrons allows LHCb to study them with precision, since the distance traveled before their decay gets multiplied by the relativistic factor βγ.

Above, the greek letter Γ indicates the "partial width" for the particle decay between brackets. The partial width is proportional to the observed number of the corresponding particle reaction.
LHCb searches for these decays in their data and finds them by reconstructing the invariant mass of pairs of opposite-sign Kπ combinations, as shown in the figure below. 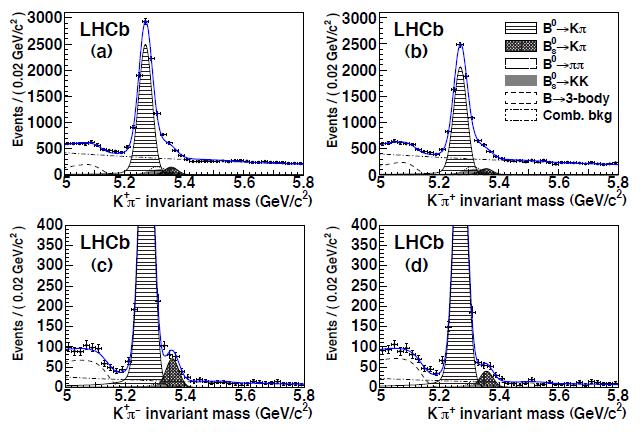 In the four panels you can see the mass distribution of LHCb data for K+π- final states (a,c) and for the charged-conjugate combination (b,d). The lower panels zoom in the small contributions to the data due to the Bs meson decays (darkest histogram) and various backgrounds. The blue lines show maximum likelihood fits to the spectrum, which allow to size up the various contributions -the raw ingredients of the asymmetry equation.

There are many possible sources of systematic uncertainty that affect the determination of the CP asymmetry. Some of them are corrected for (these are ones coming from a possible production asymmetry of the B mesons), others are only estimated and contribute to the total uncertainty that LHCb quotes on the measured values. The final result is the following:

where the first uncertainty is statistical and the second is the quadrature sum of all systematics. The B0 result is compatible with the world average (-0.098+-0.011), and is claimed to correspond to a 6σ significance; the Bs result is estimated at the 3.3σ level and is compatible with a former CDF determination (0.39+-0.15+-0.08).
A Quantum Diaries Survivor
More Articles All Articles
About