Tommaso Dorigo
Last Saturday night Gian Francesco Giudice and I discussed the discovery of the Higgs boson and its aftermath in front of a wide audience gathered in the Aula Magna of Mantova University.

The event was #173 in the wide program of the town's literature festival, a week of seminars, interviews, performances by authors of books, journalists, and intellectuals in a broader sense. 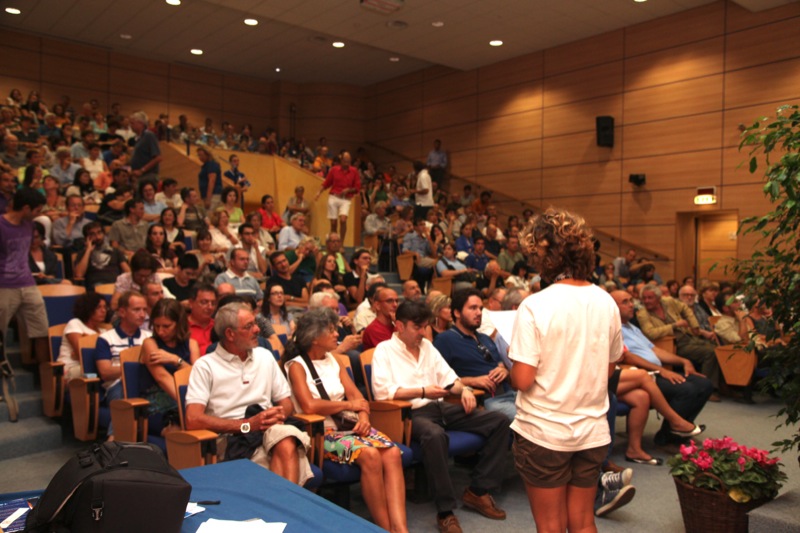 Directed by the organizer of the event Matteo Polettini, who is also a physicist although he specialized in statistical mechanics, Gian Francesco and I started off by laying out the ideas of why there had to be a particle, a manifestation of the fabric of space -the higgs field, and what were the tools and the methods by means of which that particle was eventually found at the LHC last July. 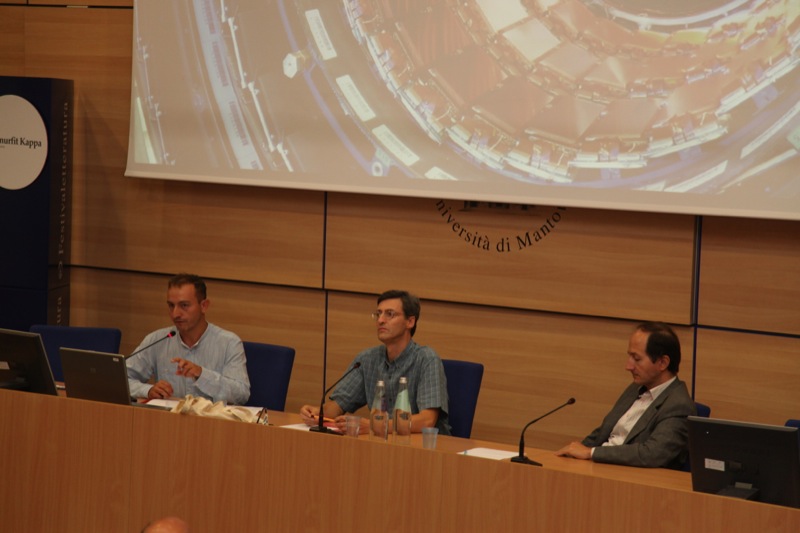 That part of our speech was quite standard, and I would even say "boring" at least to me, being a tale I have told several times already now. But there followed a more interesting discussion when Gian Francesco introduced the ideas of a multiverse, the possibility that our universe is just one bubble in an infinite foam, untestable from within and with laws of physics that vary randomly from one bubble to the next. 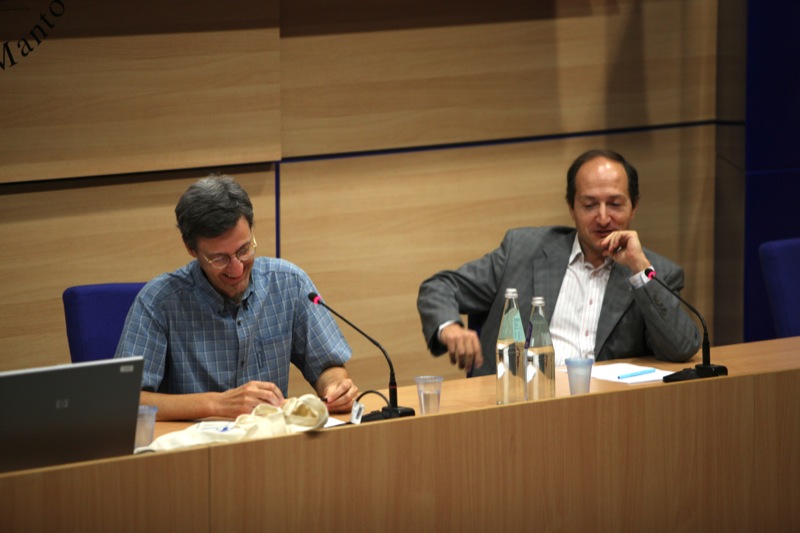 Having heard Giudice's open-air lesson a few hours earlier, when in front of a blackboard set up in Piazza Mantegna he had explained very beautifully the concept of symmetry in physics and the amazing concept that one can determine all the properties of a physical system by just specifying the system's symmetry transformations (he made the extremely simple example of a mysterious object in a pocket, which looks exactly the same from any direction you look at it: enough to know it's a perfect sphere), I was -or at least I looked- a bit surprised to hear him support the idea of a untestable world, one where we need to e.g. relinquish our hope to one day be able to explain away the observed value of the free parameters of subatomic physics. So when he said "these theories need not be testable" I was quick to interject "...but they are indeed de-testable!". 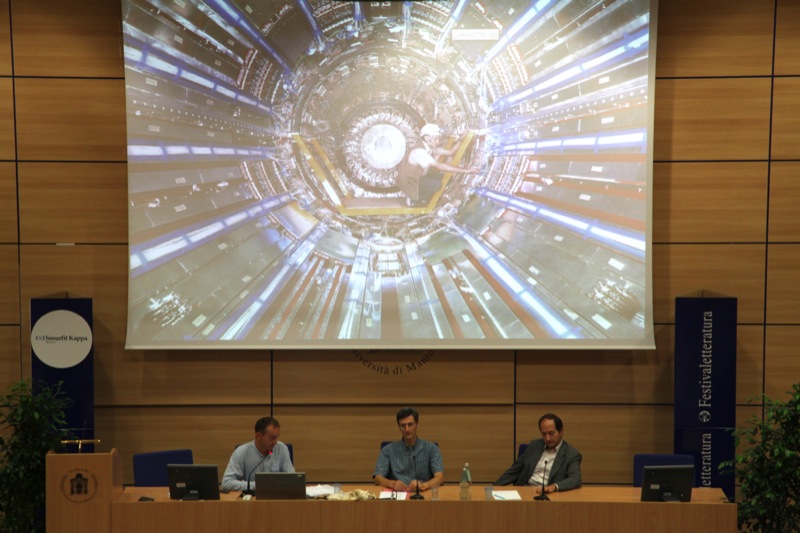 The discussion was scheduled to last one hour, but we kept our audience glued to their chairs for almost two, without boring ourselves nor apparently them. Being unfamiliar with discussions of the multiverse in public, it was interesting to me to detect how the idea is fascinating to most laypersons. I believe one reason is the religious aspect of the whole thing.


Indeed, long ago man invented religion as a way to explain what he could not figure out by logical methods, as well as to accept his own mortality: religion made acceptable the concept of death, as well as give an explanation to other natural phenomena. And man is now inventing the multiverse in what appears to me a new, albeit well disguised, attempt in the same direction. One as reassuring and sweet as the idea of an almighty entity: because by throwing one's hands up with the idea of a landscape of universes with any possible combination of parameter values one relieves the pressure of feeling powerless, as of yet, in the task of understanding the new layer of mysteries that fundamental science has come to face. 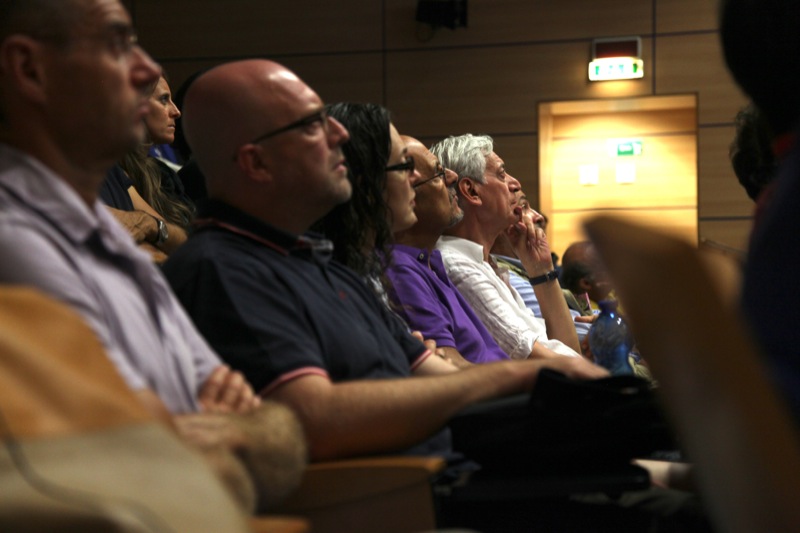 I think one additional appeal of the idea of a continuous birth of universes of all kinds is the built-in feature of an eternal comeback of the same initial conditions, or infinitely similar ones. We might be immortal after all, but not in the sense that Tipler figured out in his entertaining but crazy book "The Physics of Immortality" - a host of intelligent computers allowing the best of us to be reborn as emulations short before the big crunch. Rather, if we accept that the universe is a multiverse unlimited in time, with bubbles continuously regenerated, we must conclude that we are bound to live again not one, but an infinite number of times. Hopefully still with a choice of what to do with our lives.

I do not necessarily think that the idea of a untestable physical reality cannot be right but, as I said yesterday at the end of our conference, I find the idea both highly intriguing and utterly depressing. For a physicist, that idea corresponds to admitting to final defeat. Unless there is a backdoor through which we can actually test the existence of these other bubbles around us, if we fail to find a credible alternative capable of providing us with new leads, physics is bound to turn back again into philosophy: it will all boil down to an  overinflated hope of understanding Nature (yes, the bitch, not the magazine), initiated by the greek philosophers and propelled with Galileo and Newton's intuitions, eventually shrinking down into a new religion.
A Quantum Diaries Survivor
More Articles All Articles
About