Tommaso Dorigo
I am very happy to have been invited, by Matteo Polettini, to two events that will take place at Festivaletteratura (literature festival), an important cultural event that takes place in Mantova, a beautiful town in northern Italy, from the 5th to the 9th of September. The first event will take place at 8.30 PM on September 7th in the glorious Piazza Mantegna (see picture, right). There, armed with a blackboard and chalks, I will attempt to explain, in the matter of thirty minutes, what are these infamous "five sigma" that physicists require for a discovery claim to be put forth. The matter will be discussed with reference to the recent discovery of the Higgs boson, but I will try to be general, to prevent the Higgs boson from hijacking the focus of the presentation.

This event is a free-entry one, so if you happen to be near Mantova on September 7th please consider dropping by. I will be happy to shake your hand and chat if you tell me you came after reading this here. The clip on the right is from the program of the festival (which you can get in full here). 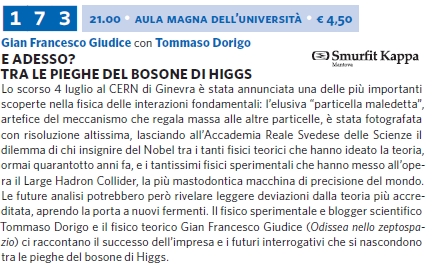 The second, more serious, event will take place in the aula magna of the University of Mantova, at 9PM on the following day (September 8th). There, I will be in the company of my friend Gian Francesco Giudice, a distinguished theorist from CERN (once at Padova University). Readers of this blog should remember Gian from my enthusiastic description of his divulgative work "A Zeptospace Odyssey". With Gian Francesco we will discuss the Higgs boson discovery, its implications, and the future of particle physics. The event is described in the clip shown on the left. Below is a quick-and-dirty translation in English:

"What Now ? Looking Behind The Higgs Boson Curtains"
On July 4th at the CERN laboratories in Geneva one of the most important discoveries of fundamental physics has been announced: the elusive "goddamn particle", responsible of the mechanism that endows other particles with mass, has been photographed with high resolution, leaving to the Swedish Real Academy of Sciences the dilemma of who should be given the Nobel prize among the several theoretical physicists who built the theory, 48 years ago, and the many experimental physicists who put to work the Large Hadron Collider, the most mastodontic precision machne in the world. Future analyses might however reveal slight deviations from the most credited theory, opening the door to new excitement. The experimental physicist and science blogger Tommaso Dorigo and the theoretical physicist Gian Francesco Giudice ("A Zeptospace Odyssey") tell us about the success of the endeavour and the future questions that hide behind the Higgs boson.