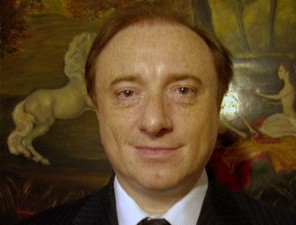 Fabrizio Tamburini (left) is an old friend - I have known him since 1976, when we both used to attend the gatherings of the newborn Associazione Astrofili Veneziani, at the Lido of Venice. The love for astronomy had brought us together, but we took different paths in our scientific activities. Fabrizio remained maybe more faithful to his old love for the universe, and is now a well-known and respected astrophysicist, who studies original ideas in the physics of photon propagation and more. I repeatedly invited him to write about his research here, but so far he has not accepted, mainly for lack of time... But I am sure he will soon. In the meantime, he will be talking at TEDx Bologna on October 15th on his theory of photon vortices. Anyway, back to neutrinos.

The recent result by Opera which hints at a possible superluminal motion of neutrinos produced by CERN and shot underground to the Gran Sasso mine in central Italy raised Tamburini's interest. Together with Marco Laveder, a colleague of the Physics Department of Padova University, Tamburini recently wrote  an interesting paper where he explains that Einstein's Relativity Theory needs not be put in discussion by the measurement: rather, the fact that neutrinos could exhibit an apparent superluminal motion is inherent in the theory written as far back as 1932 by Ettore Majorana, the talented and mysterious Italian physicist who disappeared shortly thereafter -probably to live in South America under false identity.

Tamburini and Laveder's paper (which you can download from the arxiv) explains how a fictitious "imaginary mass" term in the solution of Majorana equations for neutrino propagation may be responsible for the observed faster-than-light travel of neutrinos in a dense medium.

Specifically, the authors start from the hypothesis that the observed superluminal speed of neutrinos may be caused by matter effects, and they work out the effective imaginary mass which corresponds to each of the experimental measurements.

What I find interesting is that Tamburini and Laveder do not stop at discussing the theoretical interpretation of the alleged superluminal motion, but put their hypothesis to the test by comparing known measurements of neutrino velocity on a graph, where the imaginary mass is computed from the momentum of neutrinos and the distance traveled in a dense medium. The data show a very linear behaviour, which may constitute an explanation of the Opera effect: 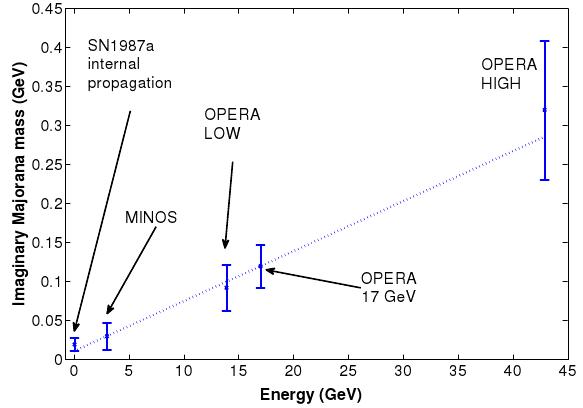