Tommaso Dorigo
The Hadron Collider Physics symposium opened yesterday in Kyoto. I am not following the works very closely, but I did give a peek at today's talks, which were on the topic of top quark physics.

The top quark is the heaviest of the six known constituents of protons and neutrons. Discovered in 1995 by the CDF and DZERO experiments at the Tevatron 1.8 TeV proton-antiproton collider, the top quark is an excellent laboratory to study Standard Model physics. Due to its extremely short lifetime the top quark does not "dress up" in a colourless hadron, but lives as a free particle, and thus allows us to study many interesting characteristics without the hassle of the complicated low-energy interactions that coloured particles undergo within time scales ten times longer than its lifetime.

One of the interesting things one can study at the Tevatron is the rate of producing top quarks of positive charge in the direction of the (positive-charge) proton beam. This is a measurement specific to the Tevatron: at the LHC both projectiles have the same electric charge, so there is no easy way to single out one direction along the beamline.  Or is there a way?

I sort of deceived you in the sentence above for simplicity, and I realize it is important to explain one detail. Top quark pairs are produced, both in proton-antiproton and in proton-proton collisions, by two different "tree-level" mechanisms -ones of the simplest kind, that is. The first (see right) is a quark-antiquark annihilation: the pair of quarks on the left in the diagram annihilate, yielding a very high-virtuality gluon; the gluon then splits into the top-antitop quark pair. The other (see below, left) is a gluon-gluon fusion process, whereby the two gluons yield the top-antitop quark pair either via an intermediate gluon, or via a "space-like" exchange of a top quark. 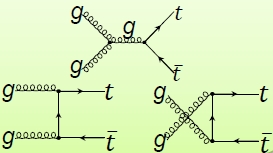 Now, while at the Tevatron the most probable way to produce a top quark pair is quark-antiquark annihilation (85%), at the LHC it is the gluon-fusion processes that dominate (85%). The reason for this is the larger energy of the latter collider, and to a minor extent the fact that antiquarks of large momentum fraction are harder to find in the proton.

So it is the quark-antiquark annihilation process the one which can readily exhibit an asymmetry: in the Standard Model this is a 7% effect, which arises from next-to-leading-order effects in quantum chromodynamics. New physics processes could however change this number; for instance, if the top quarks were at least in part produced in the decay of a massive object, one might expect a larger effect. Hence the interest of measuring the asymmetry as precisely as possible.

In order to define an asymmetry one must remember that the center of mass of the produced top-antitop pairs may be moving in either direction along the beam line: this is due to the arbitrary value of the momentum fraction carried by each of the initial state partons which give rise to the production process. So rather than counting the rate of top quarks moving in one or the other direction, one is interested in measuring the polar angle between the top and antitop quark. The polar angle is the angle taken with respect to the beam line: a positive value means that the top quark goes more "forward" than the antitop quark.

So now once one has this signed polar angle (we rather use the "rapidity difference" Dy, but that is a unnecessary detail - rapidity is connected to the polar angle by a simple functional form) the asymmetry can be defined as the difference between the rate of events at positive and negative angles, suitably divided by the sum of the two.

The measurements of the forward-backward asymmetry at the Tevatron have consistently shown a discrepancy with respect to quantum chromodynamics in the past: both CDF and DZERO reported two- to three-standard deviation excesses of the asymmetry. CDF last week published a preprint where they report on a measurement based on the full Run II statistics: that is the measurement also discussed in the presentation by Yuji Takeuchi at HCP today. 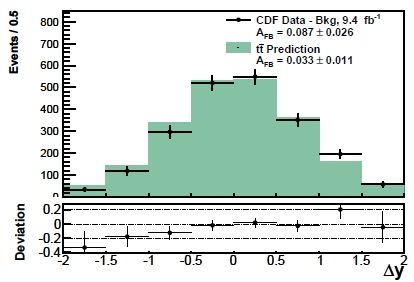 The measurement is based on 9.4 inverse femtobarns of leptonic-triggered events. The top quark pairs are reconstructed from their "single-lepton" decay mode, whereby the W boson emitted by one quark decays to a electron-neutrino or muon-neutrino pair, while the W boson emitted by the other goes into a pair of hadronic jets. From a cleaned-up sample of 2653 candidates CDF extracts the reconstructed asymmetry (right), which is then unfolded to "undo" the effect of the detector acceptance and reconstruction efficiency. 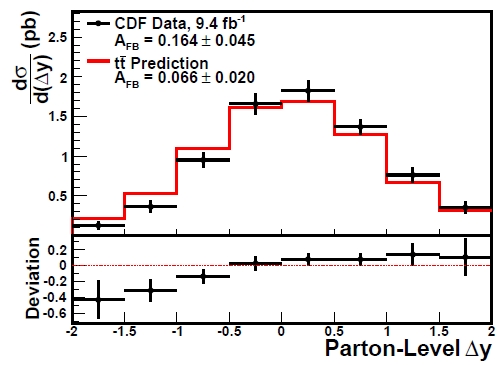 The corrected asymmetry is shown in the figure on the left. You can clearly see that there is an excess of data (black points) at positive Dy values with respect to NLO QCD prediction (red curve).

The asymmetry is then extracted both as a single integrated number and as a function of Dy; the latter dependence is fit to a line in the graph below. One then finds a slope of the data increasing with Dy, and an effect which is almost three times as large. The difference with the Standard Model is quantified at the level of 2.2 standard deviations. 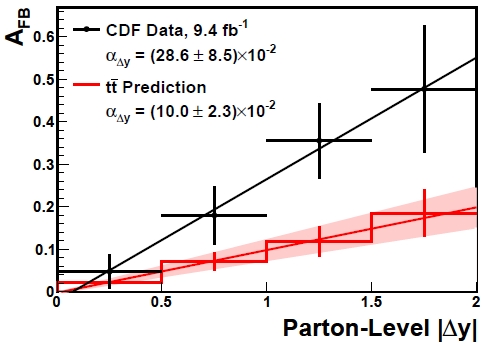 And what does DZERO say ? They did not update their 5-inverse-femtobarn result, so we have to refer to that "old" measurements. DZERO also finds a larger asymmetry than predicted in their analysis of single-lepton top pair decays, while their result based on a dileptonic sample (top pairs where both W bosons decay to electrons or muons) is in agreement with Next-to-leading-order QCD.

The whole picture will be discussed in more detail in a presentation by Regina Demina tomorrow, so those of you who want more detail on the matter are encouraged to look at the slides - they are put online in the indico site of the HCP conference quite promptly. Just follow link and instructions from here.
A Quantum Diaries Survivor
More Articles All Articles
About