In quantum physics this inaccuracy is represented by the wave function, which is a probability amplitude distribution. It renders the inaccuracy stochastic.

In the Hilbert Book Model this argument is used in order to explain why physics contains fields, thus it has far reaching consequences. One could apply non-separable Hilbert spaces, such as a rigged Hilbert space, but that takes the argument away why physics must contain fields.

This can be taken one step further. This occurs by deliberating about the carriers. What can they be? A daring and at the same time promising choice would be that they are tiny patches of the parameter space of the QPAD. The parameter space can be seen as the imaginary part of a quaternionic distribution. By transporting tiny patches out of that space to another location the space can be locally compressed and may extend at other locations. In this way a kind of space-atmosphere is created.

This daring interpretation immediately gives an explanation for the existence of space curvature in the neighborhood of particles.

QPAD’s have still another advantage above CPAD’s. Quaternions have two independent sign selections, where complex numbers have only one. One of the sign selections works isotropic. It is called conjugation and switches the sign of all three imaginary base vectors. The other is a reflection and exists in three independent directions. As a consequence eight different sign selections exist. This fact is hardly known. 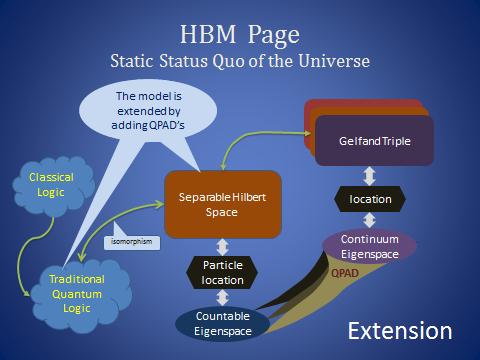 The Hilbert Book Model (HBM) is a simple Higgsless and self-consistent model of fundamental physics that is strictly based on the axioms of traditional quantum logic. It uses a sequenceof instances of an extension of a quaternionic separable Hilbert space that each represents a static status quo of the whole universe. It widely uses the opportunities that are offered by QPAD’s. The HBM uses the sign flavors of coupled QPAD's in order to construct all known elementary particles that occur in the standard model.

Due to its reliance on QPAD’s rather than on CPAD’s its methodology is unconventional and rather controversial. Methods that work in QDE and QCD cannot all be applied in the HBM. However, the HBM offers circumventions for this dilemma. It treats linear equations of motion such as the Dirac equation as balance equations. It treats fundamental physics as a space streaming problem.

CONCLUSION:
The fact that a rather small change in the methodology, such as a switch from CPAD’s to QPAD’s is capable of causing a drastic change in the view on the fundaments of physics,shows that these fundaments are still not well comprehended and are far from well established.

I am a retired Physicist (born in 1941) with experience in chemistry, Fourier optics, image intensifiers, quantum logic, quantum physics, modular...