We're Suffering And Dying From Diseases Whose Treatments Are Still Unknown
By Raul Isea | June 19th 2017 07:23 AM | Print | E-mail

I have always imagined a future that is free of disease. However, we continue to suffer from diseases such as malaria, cancer, and AIDS for which there is no known cure. To make matters worse, other diseases such as poliomyelitis that were once considered to be eradicated are returning.  Recall the success of the vaccine developed in 1952 by Jonas Salk (1914-1995) to combat this scourge, but poliomyelitis is still endemic in Nigeria, India, Pakistan and Egypt.

Keeping these facts in mind while examining the oil painting “The Doctor” by the British artist Sir Luke Fildes (1843-1927) where a doctor attempts to relieve the pain being suffered by an almost lifeless girl. This painting reflects our inability to curb and combat many of the diseases at the present time. It is true that we can cure some diseases but not others.  Perhaps he is displaying anguish after the death of his firstborn child who died of tuberculosis in 1877. 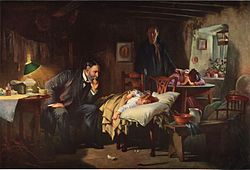 Whoever has children recognizes in this "pictorial instant" that was masterfully executed by the artist, the pain of the mother who is seen crying in the shadow surrounding her sick daughter as well as the hope of the father who offers comfort to his wife.

Fildes impels me to reflect on our obligation and urgent need to find a cure in our lifetime for the disease. In fact, I have witnessed the continuous scientific advances that have taken place in recent years which is why I think that the day is not far off when the world will hopefully be free of any disease. It is possible that the moment will arrive before the year 2100.

Why do I feel optimistic you ask? I dare to answer that question based on a specific example: the short time in terms of human inventiveness to create computerized axial tomography equipment whose use for medical purposes started in 1972 that was based on mathematical studies that were published in 1917.

So I just hope the grandchildren of my children live in a disease-free world where the only threat is an eventual rain that could disturb a garden party.

Simulation and Reality
More Articles All Articles
About

Raul Isea is currently an associate researcher at the Fundación Instituto de Estudios Avanzados IDEA in Caracas-Venezuela. He got the Ph.D in Chemistry...