To observers in much of North America and East Asia, on January 31st, the second full moon of the month, passed through Earth’s shadow in a Super Blue Blood Moon. Alas, we in Europe did not see any of it.  Even so, the BBC put on a programme BBC One - Wonders of the Moon, a documentary exploring how the monthly cycle of the Moon shapes life on Earth, and at the urging of a friend I watched it, even with the reservation that much of it might be the same old stuff.  However, I was pleasantly surprised how much of it, even basic stuff like how the moon’s phases arise, was presented in a refreshingly new way.

I learned of the moonglobe of the Museum of the Moon (a touring artwork), with craters on the nearside and the far side displayed in beautiful detail.  To highlight the far side, there was an interview with Noah Petro from the Intrepid Sea, Air and Space museum, who is a scientist at NASA’s Goddard Space Flight Center. Here is an hour-and-a quarter long video of a presentation by him if you want to bone up on lunar exploration. 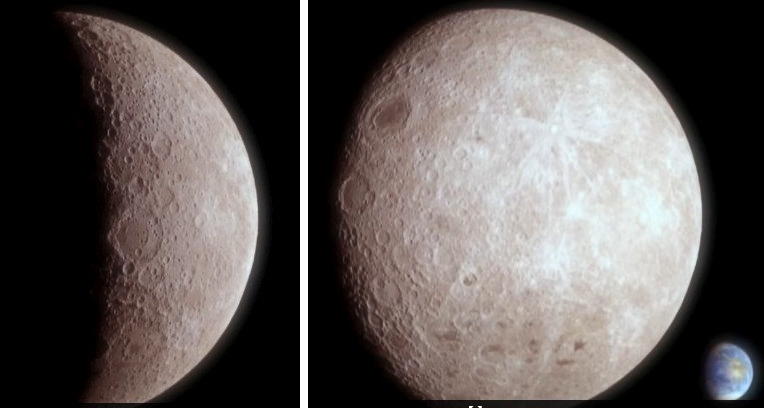 Snapshots from the BBC programme showing the large impact basins and (right) the Mare Moscovianum which is the largest dark area on the far side.

Then we were treated to pictures of corals in the Great Barrier Reef, synchronizing their reproduction with the full moon, to maximize the chances of egg and sperm meeting.  Following this, with the help of low light cameras, lions were shown hunting in the Serengeti as the Moon waned, increasing their chances of stalking their prey unnoticed.  In Tanzania, people are three times more likely to be killed by lions when the Moon is not so bright.  Tidal mudflats are among the most nutritious environments on our planet, allowing migrating birds to refuel on the numerous invertebrates concealed in the mud.

Come new moon, and occasionally we are treated to the sight of a total solar eclipse.  We saw excited crowds in Wyoming, observing the 2017 American eclipse, followed both in the programme and chronologically at the time by St. Louis, Missouri, where an excited class of schoolchildren were gathered by their enthusiastic science teacher.  We were not shown Carbondale, Illinois, close to where had the longest duration of totality visible in any town.  There will be another total solar eclipse will occur in 2024, following a very different track of totality, but also visible at Carbondale giving the town the nickname “eclipse crossroads”.

There was an extended interview with the Apollo 12 astronaut Alan Bean who spent nearly 8 hours of time walking on the Moon’s surface in 2 extra-vehicular activities,.  He is pictured on the right of this group:

Since then, he has painted about 250 pictures of the mission: here he is in his studio. 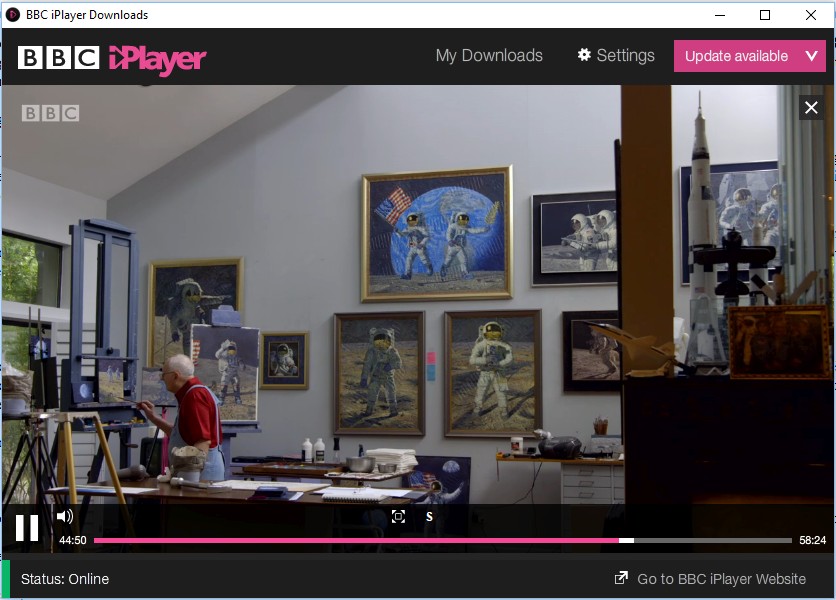 While on the subject of astronauts, an actual incident from 1969, as related to me.  In England, a man and a woman are lying on their backs outdoors, looking at the Moon.

He: “Just think!  There are people walking about on there.”

The Hebrew calendar in lunisolar, with months timed from the new moon, and with every two or three years an intercalary month added to keep it in step with the seasons: this is the origin of Easter being a movable feast.

In contrast, the Islamic calendar is strictly lunar, so each month is about 11 days earlier in the following year, until it reaches the beginning of the solar year and skips to the end of the same solar year.  It does not take its beginning from astronomical new moon, but from the first sighting of the waxing crescent.  Muslims in cloudy Europe have generally relied on a sighting from Arabia (possible since the invention of the telegraph) but increasing trying to spot the crescent from where they are living.  We saw a group gathered on a hillside overlooking the London Borough of Croydon with telescopic aid, excitedly spotting the crescent appearing through this band of cloud.  This would be most difficult in autumn, when the ecliptic makes a very low angle with the horizon at sunset.

The Chinese calendar is taken from astronomical new moon, and one of the favourite celebrations is the Mid-Autumn Festival, which takes place at full moon closest to the Autumn Equinox, similar to the Western Harvest Moon.  Here are some Mooncakes, traditionally eaten during this festival.

And today is Chinese New Year.  Although new moon occurred in London yesterday 15 Feb at 21:05 UT, in China it was already China 16 Feb, 05:05, so this date is taken all over the world.  Here are two Chinese New Year Songs.  The first video shows a line dance to one of them, the second is a song all about the relief at the passing of winter and joy at the arrival of spring.