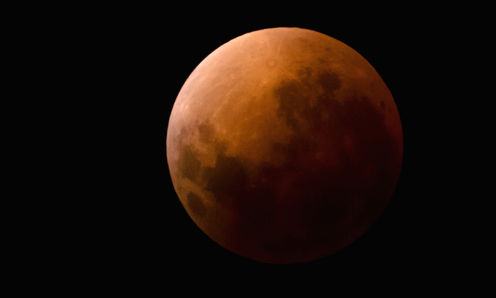 At least twice a year, Earth comes between the sun and the moon. The result is a lunar eclipse, where we see the splendid sight of Earth’s shadow falling across the moon.

Lunar eclipses are wonderful to watch as they are very leisurely and no special equipment is required. During the eclipse, the moon slowly makes its way through the Earth’s shadow and becomes increasingly dark.

There are three different types of lunar eclipses: a penumbral eclipse, a partial lunar eclipse and a total lunar eclipse. For each one the moon takes a different path through the Earth’s shadow. As a result, the amount of darkness that engulfs the moon will vary.

To be precise, the Earth’s shadow is formed of two parts: the outer penumbra which is quite faint and the inner umbra which is the deep or true shadow.

A total eclipse technically begins when the moon moves into the penumbra. But the change in brightness of the moon is so slight that it’s hard to register. It’s not until most of the moon has moved into this pale shadow that keen observers will notice a slight dimming.

Usually the moment when the moon crosses into the umbra is used to mark the start of the eclipse. This is when the first clear sign of a shadow begins to appear.

As the eclipse progresses, the curved shadow makes it look like a bite has been taken out of the moon. The various stages of a total lunar eclipse - this one seen from Alaska on December 20th 2010 over a two hour period. Flickr/The National Guard, CC BY

Whenever you see that effect, you are repeating anobservation made by Aristotle more than 2,000 years ago. He used this view to support the idea that we live on a spherical Earth.

Importantly, only a round Earth will produce a curved shadow every single time a lunar eclipse occurs and independently of where you happen to be located as you watch the eclipse.

With the moon partially eclipsed, the region in shadow is quite dark and appears in stark contrast to the remaining bright regions of the moon. But as more of the moon is engulfed in shadow something surprising starts to happen.

The shadow begins to lighten.

Light in the darkness

Totality occurs when the moon sits entirely within the umbra. But instead of becoming completely dark, this is the wonderful moment when the moon takes on a coppery or reddish-orange glow.

What’s happening is that some sunlight still manages to reach the moon but it must travel through Earth’s atmosphere to get there.

In fact, if you were standing on the moon during totality and looking back at the Earth, you would see the atmosphere lit up as a red ring of light.

The red colour is due to scattering in the Earth’s atmosphere. In fact, it’s the same effect that makes the sky blue.

Earth’s atmosphere is made up gas molecules and also contains airborne particles, such dust and smoke, which are collectively known as aerosols.

These molecules and aerosols are very good at scattering blue light (or short wavelength light) in every direction. The more atmosphere the sunlight must pass through, the more scattering occurs.

When the sun is low on the horizon at sunrise and sunset, the light travels through enough atmosphere to scatter the blue light away and the sky turns red.

During a total lunar eclipse, sunlight must travel entirely through the Earth’s atmosphere before reaching the moon. The blue light is completely scattered away leaving only the red light (or long wavelength light) to make it through.

The atmosphere does one more thing. It refracts or bends the red light, redirecting the light into the Earth’s shadow to bathe the moon in a coppery glow. How red and dark the moon becomes during a total eclipse is completely dependent on our atmosphere.

Dust storms, volcanic eruptions and bush fires can all send particles into the air that cause dark red eclipses (and deep red sunsets too). Whereas, if the atmosphere is fairly clear then the moon will turn a bright orange-red during totality.

It’s all a phase

Lunar eclipses can only happen around the time of a full moon because this is when the sun and moon are positioned on opposite sides of the Earth.

An interesting fact about a full moon is that only around this time is the moon in the sky the entire night. A full moon rises at sunset and sets at sunrise.

But we don’t get a lunar eclipse at every full moon. This is due to the moon’s orbit being slightly tilted, by just 5 degrees, relative to the Earth’s orbit around the sun.

Most of the time the full moon misses the Earth’s shadow and passes either above or below it. But at least twice a year, there’s a perfect alignment and an eclipse occurs. During a total lunar eclipse the sun, Earth and moon are completely aligned and the moon travels through both regions of Earth’s shadow: the penumbra and umbra.

But when the alignment isn’t so perfect it can cause either a partial eclipse or a penumbral eclipse.

During a penumbral eclipse, the moon passes only through the pale penumbra and entirely skips the noticeable and dark stage of an eclipse.

In practice, it’s very difficult to see any changes to the moon during a penumbral eclipse because the shadow is so weak.

If the moon’s path takes it through the penumbra but only partly into the umbra, that’s when a partial eclipse occurs. On occasion there can even be a trio of eclipses, with the alignment of the moon’s orbit such that three successive eclipses will occur.

The new moon is the opposite phase to the full moon. The sun and moon are now positioned on the same side of the Earth. The two of them are together in the daytime sky and the moon rises with the sun and sets at sunset.

When the moon passes directly in front of the sun, rather than above or below, a solar eclipse occurs.

A pair of eclipses occurs about every six months. It’s fairly uncommon for both eclipses in a set to be seen from one location. And when it does happen the eclipses are usually cut short.

This was the case in April 2014, when Australians saw the end half of a lunar eclipse, followed two weeks later by the first half of a solar eclipse.

Time for a lunar eclipse

With a lunar eclipse, the eclipse occurs at the same moment for every location on Earth. But the eclipse can only be seen from those places where it is night and the full moon will be visible in the sky.

As such, the timings of a lunar eclipse are only dependent on the local timezone. So no matter what local time it is, when a lunar eclipse is occurring everyone on the night side of the Earth will be watching the event at precisely the same moment.

Tanya Hill, Honorary Fellow of the University of Melbourne and Senior Curator (Astronomy) at Museum Victoria, does not work for, consult to, own shares in or receive funding from any company or organization that would benefit from this article, and has no relevant affiliations.