Robert H Olley
Not long ago, I was watching a documentary The Pharaoh in the Suburb on Channel 5 (UK terrestrial television) which told us that

The discovery of a gigantic statue in a suburb of Cairo shed light on an almost forgotten period of Egyptian history, and the accomplishments of one of the greatest pharaohs of all, Psamtik I, who reigned 664–610 BC.

The statue was discovered in March 2017, and here he is after being excavated: 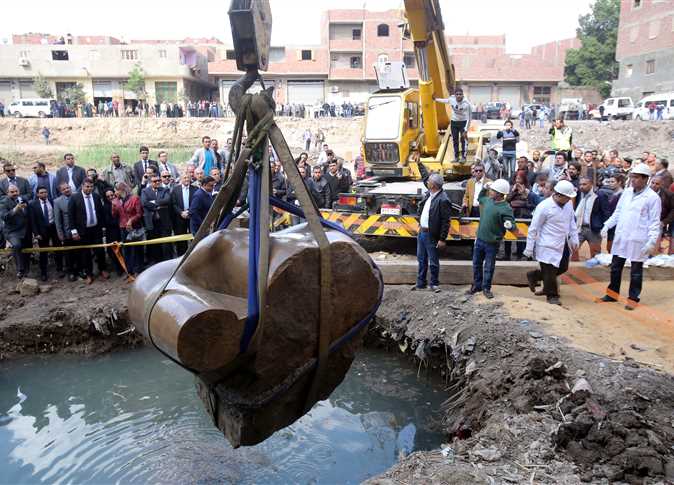 The picture is taken from this article, which appeared a few months later, Two toes of King Psamtik I statue excavated in Matariya (Egypt Independent).

Something of his significance and power can be gathered from this article Psamtik I | king of Egypt | Britannica. He encouraged a revival of Old Kingdom (c. 2575–c. 2130 BC) ideals in religion and art in Egypt, partly as a response to the recent foreign domination by Kush and Assyria. One thing he did was to employ Greek mercenaries in his military campaigns, and the documentary suggested that this contact inspired Greek art to make a great transition from vases like this: 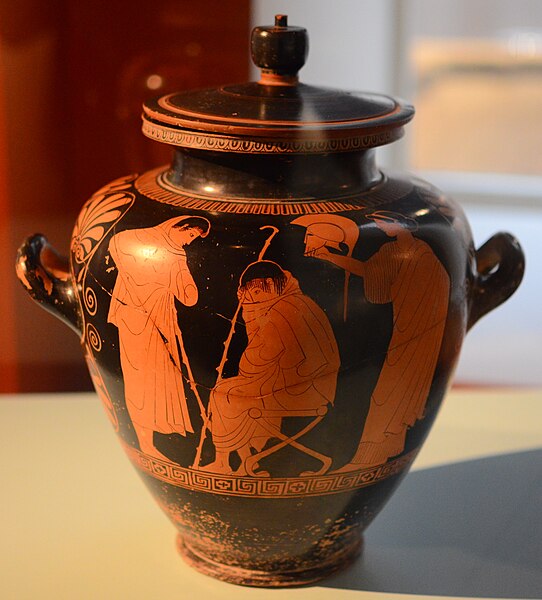 to monumental statuary such as this early example, made from Island marble, found in Delos, in a sanctuary of Artemis. It is dated to approximately 650 BC, quite early in the reign of Psamtik I, so it may well be that some of his big ideas were picked up by visiting Greeks also.

So where does mathematics come in? Recently my attention was drawn to this article Mathematics-in-Ancient-Egypt-Part-II.pdf by Assem Deif, professor of mathematics at Cairo University and Misr University for Sciences and Technology. Among a wealth of interesting detail, one theme that runs through the article like a leitmotif is the widespread neglect of the historical Egyptian contribution to the mathematics we use today.

When preparing my own lectures on history of mathematics, I read his History of Mathematics (1893), in which he noted that Greeks acknowledged their indebtedness to Egypt in this regard.

But the first time I encountered history of mathematics was at school (early 1960s), and as I remember, it started with the Babylonians and their astronomical calculations, and then moved on to the Greeks. So why has the Egyptian contribution been overlooked?

One cause is the inevitable simplification that occurs in history teaching. Physics lecturers note that in mechanics, students have met Archimedes and his law of the lever, then on to Newton, and then to Einstein, ignoring the centuries of progress in between. Because of the fuss made over Galileo’s disagreement with the Pope, few people are aware that he made significant advances in mechanics both before and after his astronomical period, and in 1638, six years after his trial for heresy, his Discourses Concerning Two New Sciences was published containing his ideas on the laws of motion and the principles of mechanics.

Another factor has been the means of recording. The Babylonians wrote their calculations on durable clay tablets, while the Egyptians wrote theirs on perishable papyrus. Early Indian mathematics seems to have also relied on perishable materials (maybe palm leaves), and has also left few traces, except for some remarkable works which were transmitted down the ages, giving an impression of massive jumps with little in between.

During the 20th Century, some strange and straightjacketed ideas of mathematical history gained a grip. Notable among these were the mathematicians of Bourbaki. Nicolas Bourbaki was an imaginary individual representing a collective of mostly French mathematics, and he was based at the University of Nancago (Nancy + Chicago!) They were a brilliant bunch, but when they strayed in to teaching their ideas became bizarre, to say the least. In regard to the former, the Russian mathematician Vladimir Arnold summarized their effect in an article On Teaching Mathematics which contains this gem:

To the question "what is 2 + 3" a French primary school pupil replied: "3 + 2, since addition is commutative". He did not know what the sum was equal to and could not even understand what he was asked about!
Another French pupil (quite rational, in my opinion) defined mathematics as follows: "there is a square, but that still has to be proved".

But in regard to history, they came up with the thesis that the Greek mathematicians knew algebra, but disguised it in the form of geometry (familiar for over two millennia in the form of Euclid’s Elements, in order to hide the sacred subject from the uninitiated common people.

It took quite an effort to dismantle this. One important work in this regard is The Mathematics of Plato's Academy: A New Reconstruction by David Fowler (Oxford University Press, 1999). From this, or a summary of it, I learned that the Ancient Greeks used Egyptian Fractions, quite different from fractions as we use them today, but very practical in application.

Another complaint against Ancient Egyptian mathematics has been that they did not use symbolism. One of the most eminent historians of mathematics was Thomas Little Heath (1861 – 1940), and his works are excellent if you want to “get into” Greek Mathematics. But he explained things in a way that relied on symbolic algebra, as if that was what the Greeks had at the back of their minds. Here, however, is what I regard as a much closer approach to how the Greeks thought.

In Mathematics and Narrative - Footnote - Aristotle on Incommensurabilty, the author (Leo Corry) starts with the widely accepted version as put forward by Heath, then says

Unguru's main point in analyzing a proof like this one is that such symbolic manipulations are totally unheard of in any extant mathematical text of the period and that there is every reason to assume that they were simply unknown at the time and thus foreign to the mathematical world of the ancient Greeks. Thus, he would conclude, the proof referred to by Aristotle must have been different from this one.

and then goes on to suggest a more plausible alternative. At this juncture he is referring to Sabetai Unguru, the historian of mathematics and science who went head on against the Bourbaki historical interpretation (and they didn’t like it, not one bit!)

The first recorded use of symbolism in the Hellenic world was much later, during the Roman period by Diophantus of Alexandria (ca 200 – 284), and he was applying it to solving specific problems, and not setting out a specific system of algebra as did Al-Khwarizmi (ca 780 – 850) in Baghdad. And if my memory serves me correctly, the systematic use of symbolism to set out mathematical procedures appeared in India before it developed with Europe with Fermat and Descartes.

Alas, in discussions of this kind, matters such as “Eurocentrism” and “Afrocentrism” raise their ugly heads, and politics rather than mathematics or science become the driving force. I have occasionally come across Afrocentrism, a cultural and political movement, when looking up history of mathematics or feeding my taste for African music. It appears to assume that the original Pharaohs resembled today’s West Africans — indeed there is a Reading a prominent Black History mural which contains this idea. But people of African descent are far from being the only ones who come out with ideas like this.

Arthur de Gobineau (1816 – 1882) was a French diplomat, writer and ethnologist who asserted the superiority of the white race over others and labelled the “Aryans”—i.e., the Germanic peoples—as representing the summit of civilization. We know what such theories led to, but here it serves to note that the term “Aryan” was taken from the Indo-Iranian people who became the ancestors of today’s Iranians (the country is named from the same word) and North Indians: the Old Iranian and Sanskrit languages are very closely related to each other, and can almost be translated from on to the other by mechanically taking account of phonetic shifts. Gobineau’s use of the term ‘Aryan’ could be regarded as an illicit example of “cultural appropriation”.

One has to navigate between two extremes. In A history of Zero (MacTutor) we read

The scene now moves to India where it is fair to say the numerals and number system was born which have evolved into the highly sophisticated ones we use today. Of course that is not to say that the Indian system did not owe something to earlier systems and many historians of mathematics believe that the Indian use of zero evolved from its use by Greek astronomers. As well as some historians who seem to want to play down the contribution of the Indians in a most unreasonable way, there are also those who make claims about the Indian invention of zero which seem to go far too far. For example Mukherjee in [ref 6] claims:-
... the mathematical conception of zero ... was also present in the spiritual form from 17 000 years back in India.
What is certain is that by around 650AD the use of zero as a number came into Indian mathematics. The Indians also used a place-value system and zero was used to denote an empty place.

From the paper I have been reading, the Egyptians did have a symbol for zero, nfr, which in the Old Kingdom marked the starting point of a series of measurements, followed by one, two, etc, rather similar to the way we in Britain have a ground floor, first floor, second floor. In the Middle Kingdom it was used to indicate that accounts balanced out.

And one more contemporary thing we have received from the Ancient Egyptians. In An overview of Egyptian mathematics (MacTutor) we read

The year was computed to be 365 days long and this was certainly known by 2776 BC and this value was used for a civil calendar for recording dates. Later a more accurate value of 365_1/4 days was worked out for the length of the year but the civil calendar was never changed to take this into account. In fact two calendars ran in parallel, the one which was used for practical purposes of sowing of crops, harvesting crops etc. being based on the lunar month. Eventually the civil year was divided into 12 months, with a 5 day extra period at the end of the year. The Egyptian calendar, although changed much over time, was the basis for the Julian and Gregorian calendars.

If the Channel 5 documentary is correct about the Egyptian influence on classical Greek art, then in a similar manner those Greek visitors to Egypt in the time of Psamtik I may have brought back home a basis for their later mathematical achievements.
Beamlines
More Articles All Articles
About