How smart does a satellite have to be to function? I'm working on the design of the Project Calliope satellite, and near as I can tell, it doesn't need a brain. All it needs is energy, sensors, the ability to yell or shut up, and a small stuffed animal.

Let's back up a bit. My picosatellite kid has a computer core and a Radiometrix transmitter. I unpacked it and then discussed how the pieces went together. But how minimal can I go?

Power is pretty basic. Solar cells charge batteries. Sensors and the transmitter use power. Since we're always powered up (unless we run out of power), I don't need fancy power management, just 'run until you die'. So no brains needed for that.

I need the Radiometrix transceiver to send down data. And HAM requirements include being able to turn off the transceiver if so ordered. So I need a 'smart switch' the recognizes the signal for 'off' or 'on'-- some sort of Analog-to-digital (A2D) circuit, such as a N0QBH Packet Radio Decoder. Minimal brains needed.

The sensors already send out data as MIDI, and I just need to feed them into an appropriate HAM digital signal. So I need a signal processor, but no additional computing needed-- no clock signals or timing, no on/off, nothin'. Just run the sensors to the transmitter so (if the transmitter is on) it gets sent out. If the transmitter is off, it doesn't matter what happens, so I don't need to deal with handling that.

Yes, an Arduino or similar processor can send or receive MIDI, but that's overkill. I don't need to _do_ anything to my MIDI data, just send it down as HAM packets. So I need a modem or TNC (terminal node controller) that basically converts the MIDI to AFSK tones. 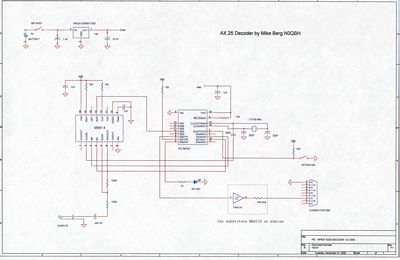 This is all, of course, a work in progress. My next step is to truly learn about HAM, past my current 'brief internet search' self-study. My goal is to make the computer unnecessary, and just use a few low power circuits. However, I accept I may discover, in the end, it's more efficient to use a generalized CPU instead.

That's what makes this science. It isn't what my opinion is, or what I like better. It's all about what a) works and b) works best, where 'best' is quantifiable and measurable-- the least power, highest stability solution.

In 'mainstream' satellite ops, designing autonomous instruments is already the standard. You have the main platform, aka the bus, where you monitor health&safety and treat any problem as an emergency (safe hold). If the bus goes down, the entire satellite goes dark. But you want the (often multiple) instruments to be as independent from the main satellite 'bus' as possible. This has two advantages.

First, it isolated problems. If the bus fails, the satellite is dead either way. But if each instrument is autonomous, the failure of one instrument has no effect on the others, and the mission continues.

Second, satellite buses are fairly standard, whereas instrument requirements are unique. So it's easier to have a standard bus that you plug in your one-of-a-kind instrument, than to have to redesign the bus for every new mission.

One way we do differ from mainstream satellites is in our innovative use of stuffed animals.  We must have room for the bear, because without the bear, thousands of school kids will be in tears, saying "you said you'd fly a stuffed bear into space"!  So really, this one's for you, kids.