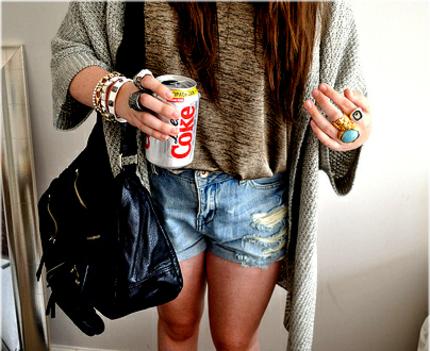 Soft drinks are loaded with sugar because they need to be sweet. But why is sweetness the fundamental consideration?

Some candies are sour and people love them. When did we become so polarized about sweet and salty? Some of it is just culture and so it would take time to adjust. A friend of mine moved to the U.S. from Korea and an early comment was, 'There is so much cheese' but Americans don't realize that we have dairy everywhere. 'Soft' drinks as we know them were created so merchants could sell something on Sundays, when 'hard' drinks were not allowed. Because the market was also kids they were made sweet.

But tea is not sweet, nor is coffee, unless you make them that way, and those are clearly popular.

Dr. Pepper is already a little spicy, so there is a precedent, but much of broad acceptance will come down to simply familiarity and comfort. A generation of kids will not like Coca-Cola made without high-fructose corn syrup because it is different. And stevia has had obstacles in acceptance simply due to not being the same old artificial sweetener.

Pioneers get arrows in the back a lot of the time but occasionally they make a new discovery and that is the puzzle everyone wants to solve. 30 years ago the notion of a nationwide coffee chain was ridiculous but Starbucks did what no one else could. The beverage industry would like to avoid the arrows in the back and get right to the money part.

Rachel Arthur of BeverageDaily.com moderated a panel at Food Vision in Cannes where Lance Leonard of True Drinks, Sophia Nadur of Tg Green Teas, and Sara Gamay of DreamPak discussed the obstacles of breaking out of the sweet soft drink box.

Nadur thinks bitter is ready because tea has been around for 4,000 years. "We’ve been hardwired to believe sweet is the only way that people want drinks delivered. I don’t believe that – I think we can get to other taste profiles and still get people to be happy. It just takes a while to wean people off."

But the big players like Coca-Cola are not advocating for sour soft drinks or stevia or anything else, they are responding to consumer demand. Determining that inflection point, when early adopters are a harbinger of broad acceptance versus a fad that is about to fade, is how fortunes are made.

So get ready to enjoy that kale-flavored soft drink?

Okay, some things will never work.