Hank Campbell
The National Academies Press will roll out some new national science standards for K-12 educators and for the first time, those standards will include guidelines on teaching climate change.

In teaching hyper-politicized climate change, everyone has an opinion, mostly because it has been made into a cultural issue and not a science one.  As Donna Antonucci, high school teacher in Savannah, told Saskia De Melker and Rebecca Jacobson  of PBS, "The biggest challenge is to get the students to look at the data without injecting political bias".

Well, it isn't always easy to get scientists to look at data without political bias either.  Anyone who scratched their head in 2007 at the unsubstantiated claim that the Himalayan glaciers would be gone by 2035 was called a Flat Earther and a Holocaust Denier.  It was a good decade for vitriolic science bloggers to run into free range hysteria and no science journalists tripped up the IPCC either, they were happy to rehash media talking points and look stupid when it turned out to be wrong.

But teachers have a more persistent problem, one that remains after shrill science bloggers have gotten jobs and science journalists have gotten...jobs in other fields; how to discuss the actual science.  Hari Sreenivasan of PBS NewsHour has a piece tonight on how the controversy affects teachers and classrooms.  One part deals with a political think tank creating climate change material, another examines new state laws dictating how global warming can be taught and they have a profile of a Colorado science teacher who got a student/parent rebellion in her classroom over it.

Think the public doesn't care enough about science?  That teacher had a rebellion, people. That is the passion scientists always said was needed by the public. And teachers are not always buying the science either.  Caitlin Fine, an elementary school teacher in Arlington said, "I have actually had more concerns and challenges from colleagues than from students." Well, that happens in biology too. It's complex stuff and therefore easy to instill doubt. Skepticism and critical thinking are American hallmarks but they can be misguided. 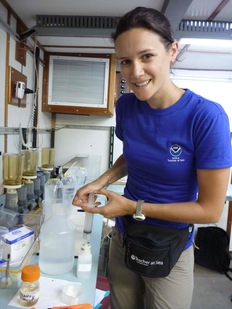 Caitlin Fine during a tour as NOAA Teacher at Sea.  Credit: PBS

But the science doesn't have to be perfect for kids, they need to know some basic facts and the facts are that pollution is bad and if we inject too much of it into the atmosphere, things will get weird.  The term "London Fog" did not come into existence because there is any actual fog in London, it's because the air was poison.  That is not political opinion.