The Brits are always thinking ahead and we could learn a thing or two from them on this side of the pond.   Those cheeky blokes are ditching pricey baubles in favor of if-we-keep-printing-money-we-will-be-Zimbabwe type ways of romancing loved ones this Valentine's Day - that is to say, without throwing out a lot of dough.

Research from a voice-to-text company over there called SpinVox claims almost two thirds of men (65%) have made huge cuts in spending this Valentines day.   1.6 million even claim they are following in the footsteps of Byron, Keats, and Shakespeare; not just by being poor, struggling lotharios getting by on charm but also by penning their own love poems this February 14th.

And who could be more romantic than Byron?    He illegitimately knocked up Mary Shelley's sister, Claire, and helped inspire the novel Frankenstein.   That's a romantic poet, people. 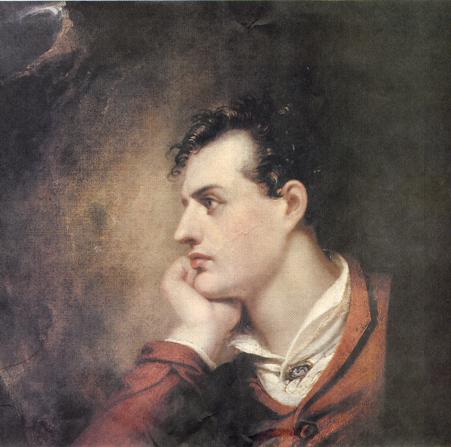 Lord Byron.  He got away with being cheap and so can you.

So all you women (well, almost all - I'm no dummy) hoping for grand romantic gestures this year could be left disappointed.   Even worse for women, their survey says 72% of British men will leave their romantic planning until the last minute this year - much too late to book romantic trips even if you warn them about being cheap.

10% of men men are even giving their loved one a home-made card as a romantic gift - though, really, a home-made card is still better than a joke card you bought at the last minute with a naked girl on it.

To help all you 'Recession Romeos' lacking the skills of Byron or Shelley, SpinVox has conscripted Christopher Mulvey, emeritus professor of English at the University of Winchester, to provide this five -step guide for wannabe Wordsworths who don't know where to start.

Professor Mulvey said, "It's hard to put a price on romance, but these are hard times, and the credit crunch is making it difficult to express your feelings through physical gifts. Nonetheless, lovers can give the object of your affection the richest present in the world in the form of a hand-crafted, heart-felt poem."

There are 5 simple routes to creating a memorable poem for Valentine's day, some of them harder than others.

1. Compute it - Basically, cheating. Type 'poetry engine' into Google, and you'll find simple software that can help you to soften any heart. Type in some key words and let the computer do the rest.

2. Shape it - Shape your poem out of lines from the great old love poems-the ones that break your heart just to read them. Run a quick web search, and you'll find them by the dozen. Take a selection of best lines and weave them together. And why not customise things a little as you go along?-'O, my Sarah's like a red, red rose,' etc. Be sure to only use old poems; anything written after 1900 might belong to someone - Wikipedia will tell you the dates.

3. Write it - The serious option. Read a few classic love poems to limber up. Think of a special moment. Keep it simple and write from the heart. Don't try and be clever, cheap or sloppy.

4. Dream it - The hardest way. The best love poems are dreams, visions or fantasies. It might be best not to try and write one at all, and just let it come. As Bob Dylan said 'I think a poet is anyone who wouldn't call himself a poet.'

5. Deliver it - This can help turn a lovely poem into something really memorable, but needs to be chosen carefully.   Would turning up in your beloved's place of work to read the poem really go down well?   That's only successful in Patrick Dempsey movies.  Consider a home cooked meal and reading it by candlelight instead.

So there you have it.   Professor Mulvey's Guide to Poetry for Recession Romeos.  To give you budding poets an extra helping hand, SpinVox has also created an interactive web page http://www.moblog.net/RecessionRomeos/ and lovestruck men  too lazy to write can even call a dedicated phone line - +44(0)... - and their love poems will instantly be published via SpinVox voice to text technology.

Thanks to Scientific Blogging, you have no more excuses not to be romantic, despite your lack of inclusion in any stimulus packages.