Hank Campbell
Dr. Oz has recently had the kind of difficulty that popularity brings - he got criticized on the floor of Congress and then got some political theater in the form of a letter to Columbia University asking that he be removed because of his promotion of suspect alternative medicine and even homeopathy treatments.

Science advocates have long been worried that a well-respected doctor and television personality - America's Doctor® - is actually against the thing that separates real medicine from the alternative kind, like double-blind clinical trials instead of anecdotes.

They can rest easy. WikiLeaks emails obtained by Julia Belluz on Vox show his recommendations are about money more than health. In one email, he tells the CEO of Sony Entertainment he is "close to consummating a longer term relationship" (that is the television equivalent of 'I was just in the neighborhood and want to come see you') in the wearable fitness market and suddenly discovered Sony is in that business and, well golly, maybe they can use the show to promote Sony's products.

Sony, one of his show's financial backers, was not biting. They also didn't want him to appear before Congress: "We feel we should not give the media who looks at Oz like [a] snake oil salesman right now any fodder to further this perception." And lawyers for his production company told him not to go unless subpoenaed.

Not all media looks at Oz like a "snake oil salesman". After Dr. Henry Miller's letter to Columbia requesting that Oz be removed from the school, ABC's "Good Morning America" leapt to his defense, noting that Oz's critics support GMOs (ummm, yes, along with every science body in the world) and in the case of Dr. Gil Ross, of the American Council on Science and Health, splashing a giant red "CONVICTED FELON" on the screen about him. (Disclosure: Dr. Ross is one of our 20,000 members and has written one blog post) 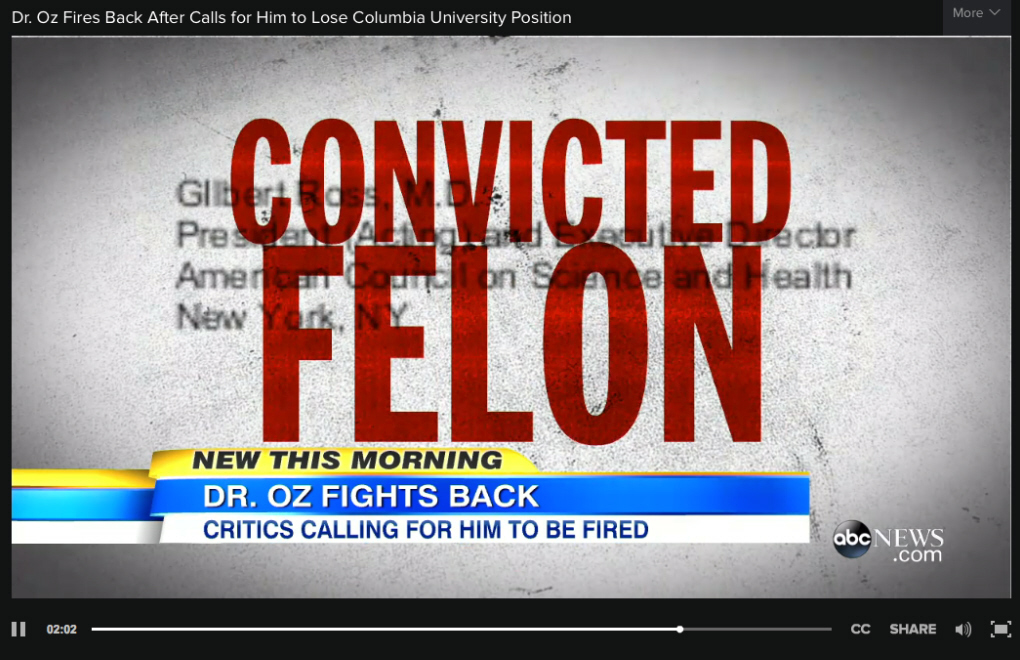 And yet Good Morning America has had both Martha Stewart and Mark Wahlberg on their program without posting giant red "CONVICTED FELON" disclaimers. Now, it didn't impact her cooking or his acting, the same way Dr. Ross is still a doctor, so that is why it looks suspicious that Oz doesn't even show for their program, Good Morning America just proactively goes after his critics. Maybe Dr. Oz has been corresponding with the CEO of Disney, which owns ABC.

Nonetheless, since now I am talking about these WikiLeaks emails and talking about Dr. Oz is a no-no unless you want the corporate media guns trained on you, look for ABC's David Wright to do a huge exposé noting that I once had a speeding ticket.
Science 2.0
More Articles All Articles
About