Home > Pharmacology > The Science of Love

There's been plenty of research showing that when people inhale oxytocin, they tend to have more positive social behavior: trust, generosity,empathy and communication. But if taking one whiff of oxytocin can make younicer, will taking oxytocin regularly keep you nicer? If you take a biggerdose, will it make you even nicer?

U.C. Davis researchers wanted to find out the long-term effects of taking oxytocin, so they studied prairie voles, the monogamous rodents that first demonstrated the positive social effects of this brain chemical.

The U.C. Davis research team, led by Karen L. Bales, treateda group of 89 male prairie voles with low, medium or high doses of inhaled oxytocin. The medium dose was roughly equivalent to the amount given to human subjects in lab studies.

They began giving the prairie voles one daily dose of oxytocin when they were weaned at 21 days old, and continued to give it to them through day 42, the time they reach sexual maturity. 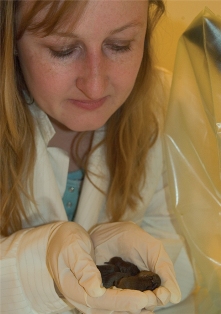 "We were trying to approximate ages 12 to 17 in humans," Bales told me in an email. Because so many parents of children with autism spectrum disorder are turning t ooxytocin products they've bought over the internet in hopes of increasing their kids' sociability, the short-lived voles offer a way to model the possible effects of long-term dosing of an adolescent.

The study also wanted to look at possible dose-dependent differences: If one dose creates an effect, it doesn't necessarily follow thata different dose will create the same effect. In fact, she cites research showing that in schizophrenic patients, 20 IU of oxytocin increased emotion recognition, while a dose of 10 IU actually decreased it.

There was one troubling result: The male voles treated with low or medium doses of oxytocin were actually less likely to bond with a female --and this effect lasted two weeks after treatment stopped. That could be equivalent to years in a human life.

The female voles in the study also seemed to be less interested in mothering.

Bales thinks that this effect could be attributable to down-regulation of the oxytocin receptors or oxytocin-producing neurons; that is, with external oxytocin flooding the receptors, they might become desensitized, while the oxytocin-producing brain cells might lower their production because it's not needed. It also could be attributable to changes in the vasopressin system, she suggests. Vasopressin is another brain chemical very similar to oxytocin that seems to be more important in male bonding.

She says, "I originally thought that we would see the most changes with the highest dose of oxytocin, and that would be because of flooding oxytocin receptors and binding to vasopressin receptors.  But since we had the most changes at the lowest dose, that seems less likely. Males do seem to be especially sensitive to developmental exposure to oxytocin...perhaps because they rely less on it normally?"

Bales' work is with prairie voles, not people. But so far,what vole research taught us about oxytocin is quite applicable to humans. We think we're so different from this tiny, humble creature. But in fact, the genetic difference between Homo sapiens and other mammals is very small.

It's not clear how applicable the results of this study might be to older humans, but certainly the body's receptors are constantly in a state of flux, responding to external changes. And it's well known that treatment with a hormone can cause the body to produce less of it.

Bales plans to do more studies using voles of different ages, and also to look at different lengths of treatment.

Meanwhile, if you are self-experimenting with oxytocin, it's a good idea to keep your dosing acute:once in a while with plenty of time for your body to go back to its natural state.