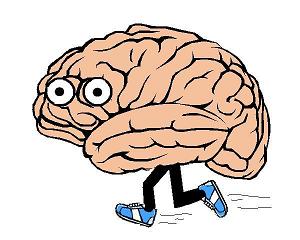 I was under the impression that the general subject of love, in all its oblique insanity, was the subject of study and much woeful writing by poets, mostly.

That is, until I came across neuroscientist Larry Young's absolutely bizarre work on the neurochemistry of love, attachment, cuddles and hugs.

Based at Emory University in Atlanta, Georgia, Young is the world's current leading expert on the biochemical basis of pair-bonding, and has done a number of studies in that area including some with dramatic results. While his research is on tiny, furry rodents called voles, the biochemistry of pair-bonding is thought to be fairly conserved, evolutionarily, so experiments done on voles may hold the key to unlocking some of the mysteries of pair-bonding mechanisms in humans too. 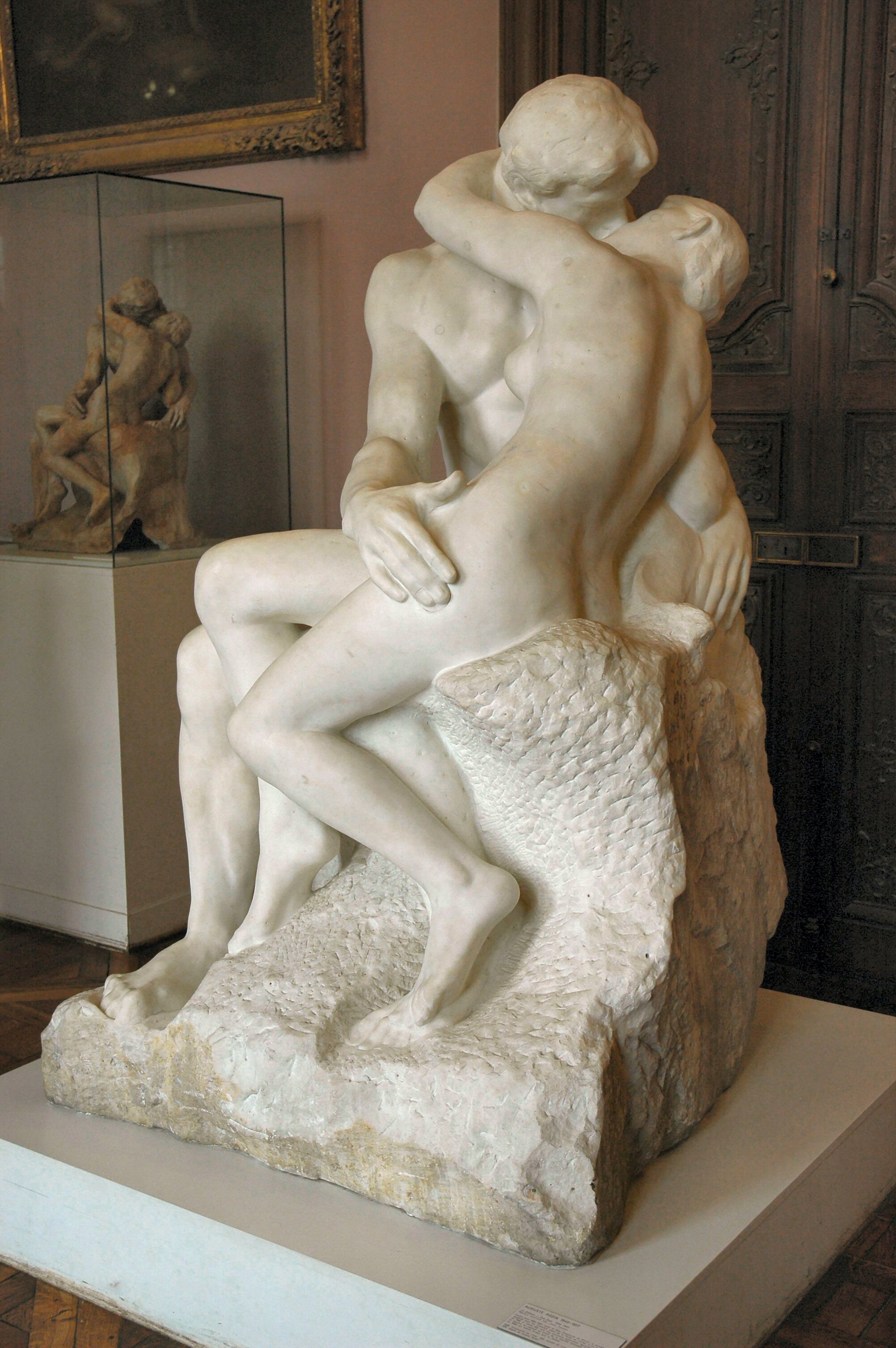 Amongst the most revealing of Young's studies was one published in Nature in 2004 that
Casanova voles could be made faithful overnight and monogamous voles, however love-struck, made to cheat shamelessly, with the manipulation of just one key single gene.

There are two species of (male) voles: the promiscuous philandering type and the monogamous marrying type. The males in the two species also differ in how social they are and how parental they become after pups are born. While members of the monogamous variety are highly social and huddle together commonly, members of the promiscuous variety are isolated and aggressive (Fig 1.a-d). Paternal care also seems to correspond with monogamy – male voles of the monogamous kind devote as much time to the babies as the females do. Babies of promiscuous voles, however, are reared only by the female partner.

At the time that Young's group conducted their single gene manipulation experiments in 2004, the sex hormones oxytocin and vasopressin were already notorious in the field of neuroendocrinology for forming bonds and attachment between mating pairs and between mothers and infants in voles and some other mammalian species. Literature also indicated that vasopressin was responsible for social recognition of individuals in voles.

When male voles were injected with vasopressin, for example, they formed stable pair-bonds with females even without ever having mated with them.  Blocking the action of vasopressin in male voles which hadn't mated, on the other hand, prevented them from forming a pair bond post-mating. In females, regulating the presence of oxytocin (rather than vasopressin) in individuals that hadn’t mated yet, produced the same results.

There was one seeming paradox in regulating pair-bonding in voles though: both promiscuous and monogamous male voles had vasopressin, and yet, their pair-bonding behaviors were completely the opposite of each other. Investigating this question led researchers to discover important differences in the levels and locations of the vasopressin receptor in the brains of monogamous and promiscuous voles, which turned out to be central to regulation of pair-bonding behavior.

Monogamous voles have vasopressin receptors in the ventral pallidum region(or the "pleasure centers") in their ventral forebrains. These centers are very similar to the human dopamine reward circuitry (or pleasure centers again), that create the euphoria that comes from mating or eating chocolate. So, in monogamous voles, vasopressin interacts with the same reward and reinforcement system that a neurotransmitter like dopamine and recreational drugs affect, to cause much bliss and ecstasy.Young‘s team hypothesized that, for the monogamous vole, mating with a female and recognizing her as an individual, socially, happened in a coordinated fashion, helping them form an association between the particular partner they mated with and the post-mating euphoria. It was perhaps the same social memory of the partner,in all subsequent matings, that made the voles perceive their partner as the "cause" of the pleasure, making them stick to them. In promiscuous voles, vasopressin receptors are not located in the ventral pallidum, but are scattered in other brain regions instead. (Fig 1.e-h)

To study partner preference, the team performed three experiments before testing the animals for pair-bonding behavior: First, they blocked the vassopressin receptors in the ventral pallidum of monogamous voles using the blocker eticlopride. Second, they inserted a copy of the gene for the vasopressin receptor from monogamous voles (V1aR-vp gene) into the ventral pallidum of promiscuous voles, under a promoter that regulated it to produce the same levels of the receptor as in the monogamous species. Third, they inactivated the V1aR gene inserted into the promiscuous voles, using eticlopride, to test if this would reverse their partner preference.

The results were exciting, to say the least:

1. A complete loss of partner preference was seen in monogamous voles upon treatment with eticlopride.

2. A radical transformation of the erstwhile promiscuous male voles upon treatment with the inserted V1aR-vp gene to behavior that was nothing short of complete monogamy. The former philanderers  started mating with the same female overnight, despite being presented with other females in heat and also started spending significantly higher amounts of time huddling with their partners.(Fig 2.a-b)

3.When the V1aR-vp gene inserted in ertswhile promiscuous voles was inactivated with eticlopride, their behavior reverted to their promiscuous partner preferences, with no trace of the new-found faithfulness. (Fig 3.a-b) 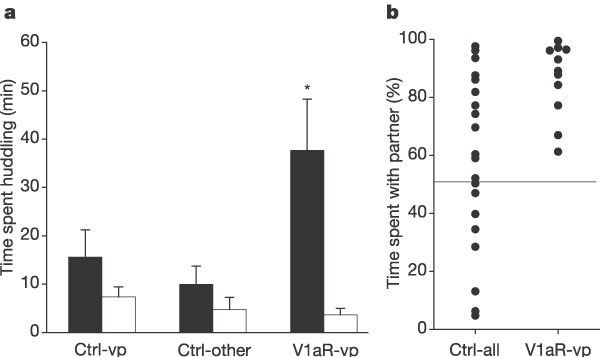 Fig 2. (Young et.al., 2004)
Partner preference test in V1aR-vp voles
a) V1aR-vp voles spent significantly more time huddling with the partner (filled column) than the stranger (open column), whereas controls for the vasopressin receptor (Ctrl-vp) and for stereotactic insertion misses (Ctrl-other) animals did not
b)A plot of the percentage of time spent with the partner for each vole indicated a shift from randomly distributed preferences in the control groups to 100% of animals preferring the partner in the V1aR-vp group 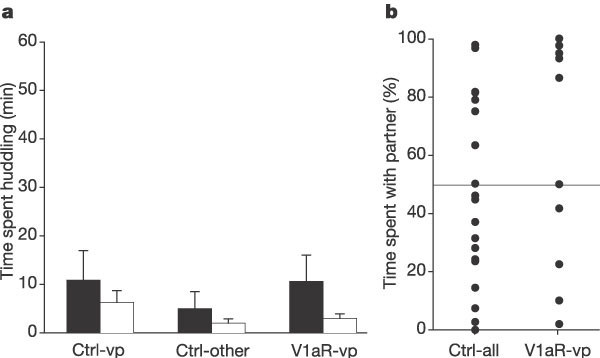 Fig 3. (Young et.al., 2004)
a) Partner preference test in monogamous voles after treatment with eticlopride and controls

b) A plot of the percentage of time spent with the partner for each vole shows a similar distribution between control and monogamous vole groups, with no significant differences

The main question that these findings threw up immediately, was how much the pair-bonding studies in voles had to do with romantic love in Homo sapiens.

In a 2009 Nature article, Young states that neuroendocrine literature has shown that bonding is quite conserved across mammals. Oxytocin is released during labor, delivery and nursing in humans, rats and sheep, for example. In ewes, an infusion of oxytocin into the brain results in rapid bonding, even with a lamb that the ewe is foreign to.

There is also a large overlap between the brain areas involved in pair bonding in voles and humans. Functional Magnetic Resonance Imaging (fMRI) studies in humans have shown that mothers viewing images of their biological children exhibit an increased blood flow to the pleasure and addiction centers of the brain,which are part of the dopamine reward circuitry and express vasopressin, oxytocin and their receptors in abundance.

Studies in the last decade by Rutger University anthropologist, Helen Fisher, who studies the chemistry of romantic love have shown similar patterns of brain activation in people looking at photographs of their lovers.

Lastly, there is evidence that like voles, humans too, display polymorphisms in their vasopressin receptor genes that can be correlated to varying levels of pair-bonding attachment.

Not unexpectedly, some of the applications of researching romantic love can appear somewhat terrifying, especially if the impact on the average citizen is considered.

As if it wasn't enough to potentially reduce romantic love to two mere neuropeptides, in an ultimate nerdy blow to the poet types, a cologne-like mixture of oxytocin and pheromones designed to give the "dating and relationship area of your life a boost", is already on the market by a pharmaceutical company called Vero Labs (http://www.verolabs.com/). And as if that wasn't enough, the mixture, called "Enhanced Liquid Trust" is in the form of a nasal spray that can be squirted up people's nostrils. (Talk about being nerdy.) Young says that oxytocin “enhances trust and tunes people into others' emotions”.

“Although such products are unlikely to do anything other than boost users' confidence, studies are under way in Australia to determine whether an oxytocin spray might aid traditional marital therapy,” he adds.

The oxytocin and vasopressin team is also responsible for social bonding and aggression, and Thomas Insel, an Emory University neuroscientist, is currently investigating the biochemistry of social bonding in voles in an effort to search for a link between that and social disorders in humans like autism and schizophrenia, both of which are characterized by isolation and lack of attachment.

As exciting and promising as these findings are for the development of treatments for neurological disorders, they are not bereft of sticky issues. The results throw up the question of whether policies concerning potentially harmful scientific technologies should be the domain of experts alone or open to a more public debate. In other words, is there currently enough democracy in science? If not, it is likely that the attempt to bring more democracy to science will be a niche for science writers in the years to come. But, that is another topic in itself.

1. At some point while reading Young’s paper, I broke into (insert a five letter word...)

An ode to vasopressin

So lessons learned from a small furry rodent,
And the finding of a single key gene, so potent,
Show that molecules are responsible for fidelity and community,
And that scientists have created evolution and history in the laboratory

2. Maybe Shakespeare was just 400 odd years ahead of his time when he wrote of Pucks that possessed love potions and frisked around in jungles, in A Midsummer Night's Dream?

3. The female vole gets into heat right after she encounters a male without a partner and smells his urine. This is probably the part where the parallels between pair-bonding in voles and humans start to fade (at least hopefully.)

Enhanced partner preference in a promiscuous species by manipulating the expression of a single gene. Nature,2004,Jun17;429(6993):754-7

Genetic variation in the vasopressin receptor 1a gene (AVPR1A) associates with pair-bonding behavior in humans.Proceedings of the National Academy of Sciences,2008,Sep 16;105(37):14153-6

Schrodinger Killed the Cat
More Articles All Articles
About