Danna Staaf
It was the year 2000, I think, and I was on a college field trip to the tidepools. The class was Invertebrate Zoology, so we were flipping rocks over and listing off the phyla as fast as we could identify them. Then someone lifted a big slab and gasped: there was a red octopus, chowing down on a shore crab.

I remember this scene so vividly in part because I love octopuses, but also because of a comment the professor made: "This is remarkable, because it's really quite rare to see an act of predation in the wild."

I was reminded of this story because of a fantastic photo in the news: not an act of predation per se, but direct evidence of a very recent act. This is the sperm whale equivalent of getting a splash of soup on your chin: 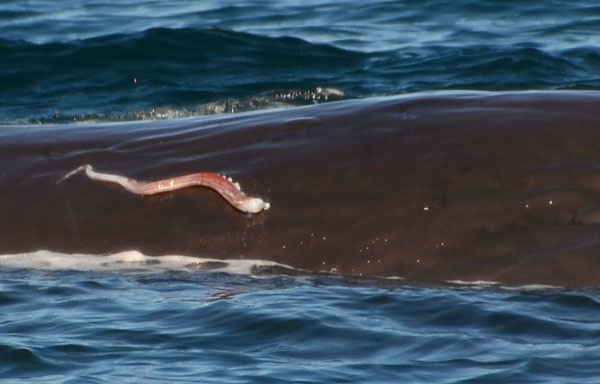 
It's a squid arm! The rest of the squid, I'm sure, is being actively digested within. Apparently a whale-watching tour off Kaikoura (on the South Island) spotted this messy diner and snapped a picture.
It must be tough to be a whale, with no opposable thumbs to wield a napkin.