I've mentioned the two flavors of squid before: the open-ocean oegopsids and the nearshore myopsids. Most myopsids are in the family Loliginidae, which contains all your familiar calamari squid, market squid, and so on. Loliginids are traditional, uncomplicated, straightforward squid. They always look like squid--unlike oegopsids, which sometimes look like jellyfish or manta rays or piglets.

Most loliginids don't even have photophores--they leave flashy stuff like that to the oegopsids--except for one group, which I had always thought was named, aptly enough, Photololigo.

But I've just learned that the correct name for the photophore-bearing loliginids is Uroteuthis. What now?

A little more research (I love you, Tree of Life!) turned up the fact that there were once two separate genera, Photololigo and Uroteuthis. Both had photophores, but Photololigo looked like a proper traditional squid: 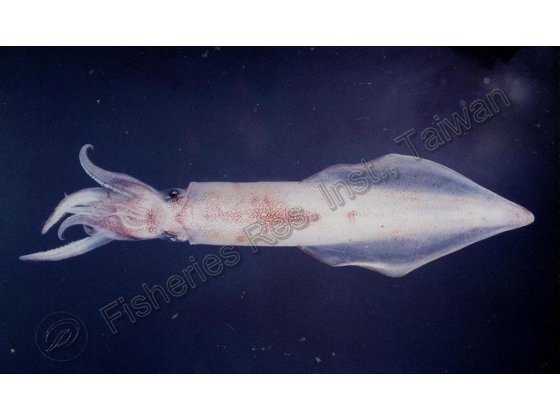 while Uroteuthis looked like some kind of pry bar:

But in 1998, along came Vecchione, and realized that these two apparently different squid were really very similar. They shared not only photophores, but also several other anatomical features and a home in the South Seas. He wrote (skippable blockquote, I'll translate it afterward):

The elongation of the posterior mantle, which was given generic status in the description of Uroteuthis, is the extreme example in a cline of mantle elongation, similar to that found in the eastern Atlantic where Alloteuthis is the extreme example. This elongation is so extreme in Uroteuthis as to cause a discontinuity in the cline. It thus warrants separate taxonomic status, but the sole recognized species in this taxon possesses all of the generic characters of Photololigo. Thus, it should be included in the genus that Natsukari described. Unfortunately, priority therefore goes to Uroteuthis as the name of the genus, rather than the more descriptive Photololigo.

In other words: Folks once thought that Uroteuthis should be in its own genus because of its long tail. But the long tail is just one end of a continuum, from longer to shorter mantles. It is really long, though, so we'd still like to give it its own name. But that name can't be a genus, because all its other features place it squarely in the same genus as Photololigo.


* One of the rules of the always-entertaining game of taxonomy.