Danna Staaf
South Korea isn't the only place fishermen are worried about losing their squid. According to a recent article in Pakistan's The News,

The internet has not been helpful in my attempts to translate Mayyah, but from the context of the article I believe it may refer to all cephalopods: squids, cuttlefish, and octopuses.

From the article's garbled English*, I gather that the Mayyah story is like that of so many other fisheries which have declined over the years.

It sounds like classic overfishing. As fishing pressure increases, the animals grow smaller and scarcer, until the fishery crashes, fishermen lose their jobs, and everyone goes hungry. Bad news all around.

But is that truly what's happening in Pakistan? Let's turn to one of my favorite sources of fishing data, the FAO. 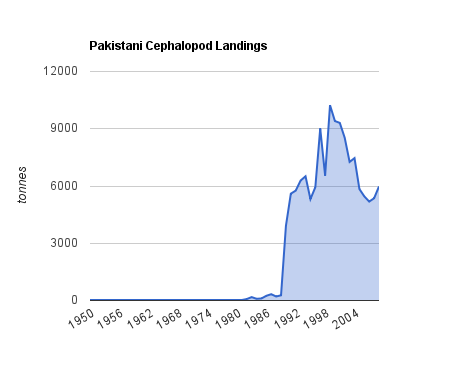 Hum. While it's true that landings have declined considerably since a 1999 peak of about 10,000 tonnes, it hardly looks like a crash. After all, these fisheries only got up to speed about twenty years ago, and the catches then were fairly comparable to today's catches.

Could the alarm of The News article be mostly a result of old fishermen's tales about how big the squid used to be, and how many they used to catch? After all, telling fish stories has been a tradition as long as people have been fishing . . .


* No blame to the poor reporter. I'm well aware that if I were to attempt an article in Urdu, it would turn out far worse than merely garbled.