For many years, scientists around the world have been intensely interested in bisphenol A (BPA), a common chemical used to make polycarbonate plastic and epoxy resins.

But what have we learned from the supersized investment in research on this one chemical, and what can we expect in the future?
Recent articles suggest that we haven’t learned as much as might be expected from such a large investment, but more research on BPA is probably in our future anyway.

The intensity of interest in BPA is revealed by searching for studies on BPA in PubMed, a biomedical literature database operated by the U.S. National Institutes of Health.  Using the search term “Bisphenol A” on November 14, 2014, PubMed identified 8,675 citations!

More than 80% of the citations were published after 1999 and there has been a steady increase in the number of new publications almost every year.  More than 700 citations have been entered in 2014, with more than a month yet to go. 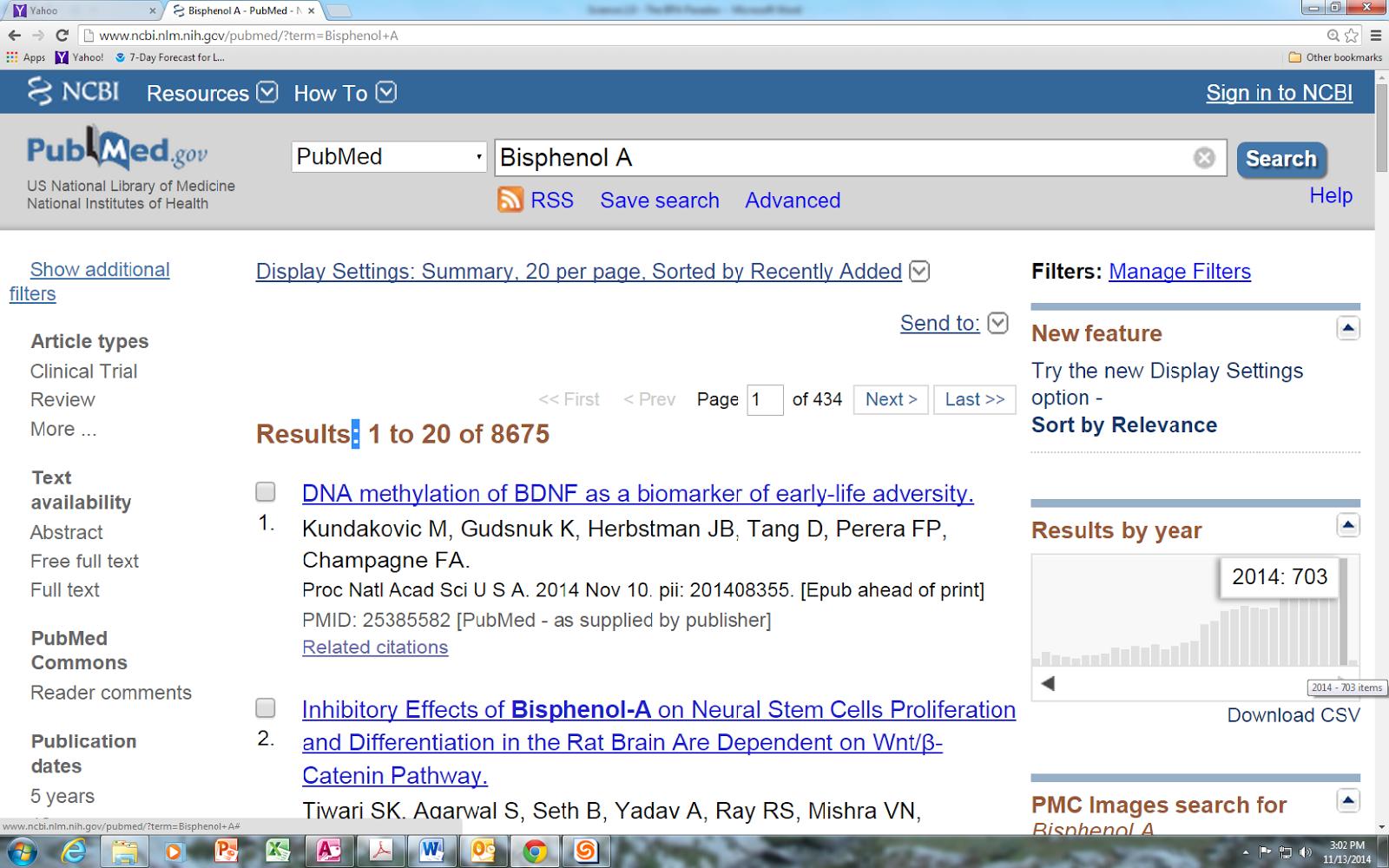 As noted in a recent article in the journal Environmental Skeptics and Critics, “BPA is certainly the most studied environmental chemical,” and that comment was based on a PubMed search in 2013 when only 7,549 citations were found.  However, as highlighted in the title of the article – The bisphenol A toxicological paradox:  The more we learn the less we know for sure – the flood of studies on BPA may not be making us any smarter.

With so many studies available, decisions around the safety of BPA should be well-grounded in science.  But paradoxically, recent regulatory decisions in Europe, Canada and Brazil to ban baby bottles containing BPA were based on the so-called “precautionary principle,” which some might apply in the absence of sufficient data.

If thousands of studies are not sufficient for science-based decisions, what will it take?

The authors highlight the paradox, but also suggest a solution using an evidence-based toxicology approach for decision-making.  They propose that application of systematic review tools may help to ensure “that regulatory decisions stand on all available information analyzed in a transparent and unbiased manner.”

This approach is illustrated with two focused case studies involving controversial claims that exposure of mice to low doses of BPA resulted in altered prostate weight in adult males, and persistent changes in mammary gland development in females.  In both cases, multiple experimental studies are available with inconsistent results.  Accordingly, a key aspect for systematic review is study reliability:

“The scientific value and applicability of conclusions from any experimental study stands on its reliability – or the extent to which their findings are consistent over time – and also on its validity, or the extent to which the experimental study truly measured what it was intended to measure.  …  Reliability is demonstrated by repeatability (i.e., internal consistency) and reproducibility or replication of original findings by independent researchers.  In toxicological sciences, therefore, researchers other than those who conducted the initial study must be able to replicate the experiment and, by doing so under exactly the same experimental conditions, to achieve the same findings.”

Reliability proved to be a critical factor in both of the case studies.  The authors note “both findings were consistently repeated by those who originally reported them but were not reproduced by independent researchers.”  To the contrary, several studies “failed to replicate these findings.”

The authors also evaluated the plausibility of the reported findings by examining how BPA is metabolized and cleared from the body.  Based on this information, they concluded that the: “rapid clearance of BPA and the fact that its major metabolites are inactive at the estrogen receptor suggest that health risk from BPA is negligible.”

The authors do not represent their work as a complete review of BPA, but modestly hope that “[t]his critical review on the most controversial topics of BPA toxicity is to be regarded as an academic contribution to evidence-based approaches in toxicology and regulatory decision-making.”

In contrast to the enormous number of studies on BPA, the authors also highlight “the overwhelming need for toxicological data on unstudied substances.”  In this light, can we expect that researchers will recognize that BPA is already well studied and turn their attention to these glaring data gaps?

Since the flow of studies on BPA might be described as a flood of biblical proportions, it might be appropriate to look to the Bible for guidance on this question:

“For unto every one that hath shall be given, and he shall have abundance: but from him that hath not shall be taken even that which he hath.”  (Matthew 25:29, King James Version)

In 1968, the sociologist Robert Merton coined the term “the Matthew Effect” in reference to this verse, which is more commonly phrased as “the rich get richer and the poor get poorer.”  The term initially described his observations on reward and communication systems in science and has since been extended to a wide variety of other fields.

“While regulatory agencies request information on poorly studied, potentially serious environmental hazards, the publications in scientific journals emphasize a relatively small, selective number of highly prominent chemicals, about which large numbers of articles were published already during the past century.”

“Such self-affirming, or perhaps self-serving, bias can impede the progress of research in new fields and studies covering new substances, thereby resulting only in incremental advances, at best, from the research investments.”

This phenomenon has more recently been highlighted in the popular field of research on endocrine disrupting chemicals (EDCs), in particular research funded by the U.S. National Institute of Environmental Health Sciences (NIEHS):

“A brief analysis of the projects funded through the NIEHS Division of Extramural Research and Training (DERT) … indicates certain EDCs — for example, phthalates, and BPA — continue to be heavily studied in DERT scientific portfolios.”

“About 18% of the DERT budget goes toward research on these EDCs, the majority of that on BPA.”

“These few chemicals may maintain prominence simply because they have been well researched in the past, not because they pose the most pressing risk to human health.  This … may represent a self-serving bias in EDC research, in which renewal and enhancement of funding, high citation rates, and attention within specialized scientific groups (and the media) perpetuates focus on a small subset of chemicals.”

The Matthew Effect allows us to predict that many more studies on BPA will be conducted in the coming years.  If the past is any predictor of the future, most of these studies will be of limited value for science-based decisions on the safety of BPA.

Far more importantly, a comprehensive research program jointly conducted by the U.S. Food and Drug Administration (FDA) and the U.S. National Toxicology Program should bring closure to the ongoing controversy about the safety of BPA.