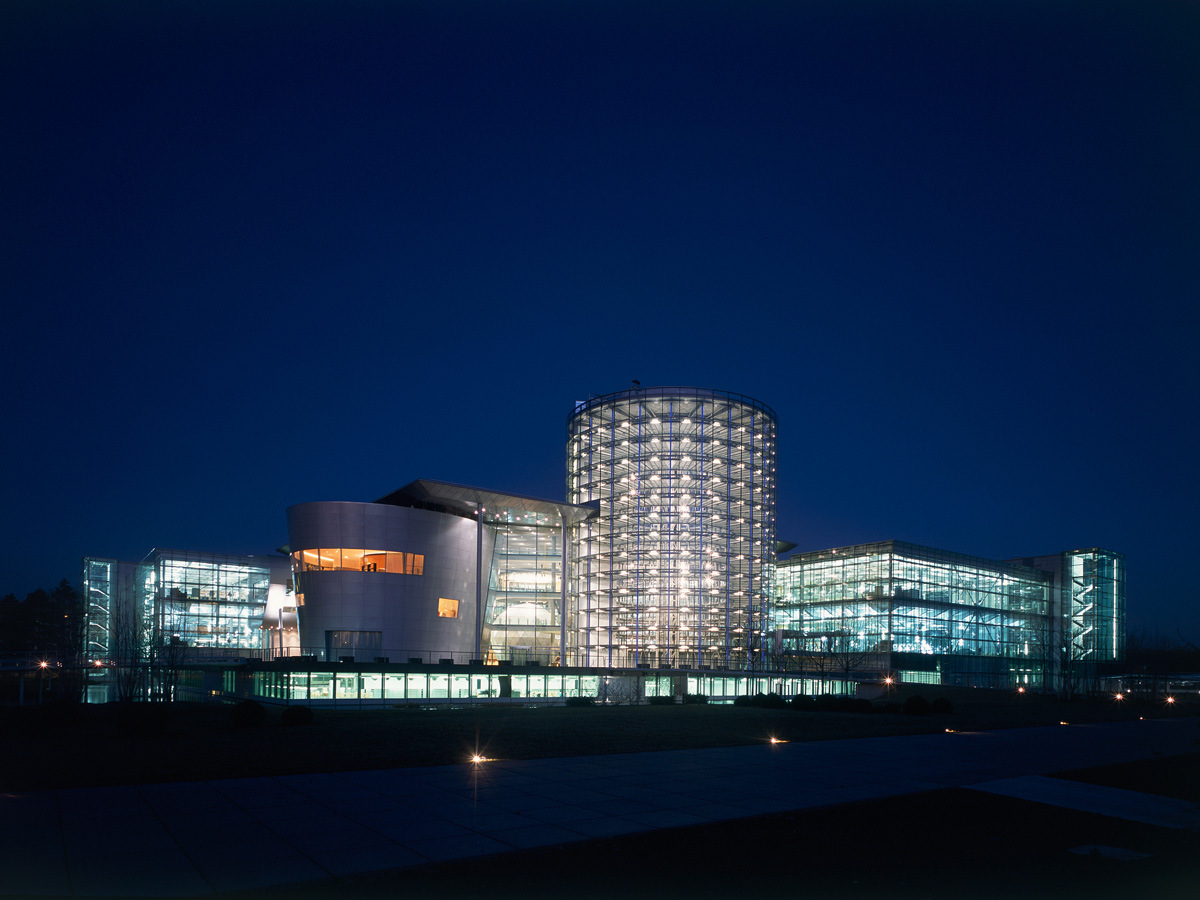 A few days ago Semperoper Ballett had its second special performance as part in the project "On the move". They play with new and adapted choreography at various places in the city of Dresden that are not "opera-like". Taking the audience into foreign spaces of emotional experience, knowledge encounters, just new experiences on both sides: the dancers and the audience alike!

Eager to what expect. Memories raced back to October 2009 when Gläserne Manufaktur hosted the 2nd World Culture Forum. Culture as the enabler of change and economic prosperity was to topic back then. Still inherent within the building, in a way haunting and calling for more - which certainly has happened tonight. So wandering shortly around getting the invisible voices of the building and what might come on the following minutes - tuning in!

Istvan Szabo, Principal guest artist of Hungarian National Ballet Company, already gave on Twitter some info about an interview with Tim Couchman, the maker of tonight's piece. Pre-info on such a performance is always good, as I have learned as an emerging learner of ballet (and opera in general). And as ballet in Dresden is going way beyond the normal, the interview was taken by one of the protagonists tonight, Ian Whalen.

Taking this vast and open space, pretty different to the dense "living-room like" Semper 2, or the Semperoper itself, challenged the whole crowd -performers and audience alike - to keep the energy focused on spot. The wonderful lightning by Ted Meier, kept all insight, energy, joy, feelings, and emotions. Amazing what lightning can add to performances - and in a way light is SPRING, and SILENT as well ;-)

Even though the main part of the performance was based on Igor Strawinsky's "Le sacre de printemps" (just a small surprise added by myself), Robert Henke's "Piercing Music" started the crowd off into a journey of surprises (of which I won't tell all in the following - there is a slight chance to check yourself tomorrow, if you haven't got a ticket). Another excellent move to tune the crowd into the emerging evening as the music pretty much reminding of Star Trek and other SciFi movies such as "War Games" (which by some coincidence had opened up a couple of hours earlier while chatting with a flatmate while installing a dishwasher for the WG). In the middle of stage rubber boots and winter jackets piled up (as some pile of firewood) - and one could almost feel the raising frowns in people's minds, "What is this going to be?"

And as the sound carpet was lowering so much that the air-condition almost took over  - the tension rose.

... the inevitable opened up: REAL ACTION 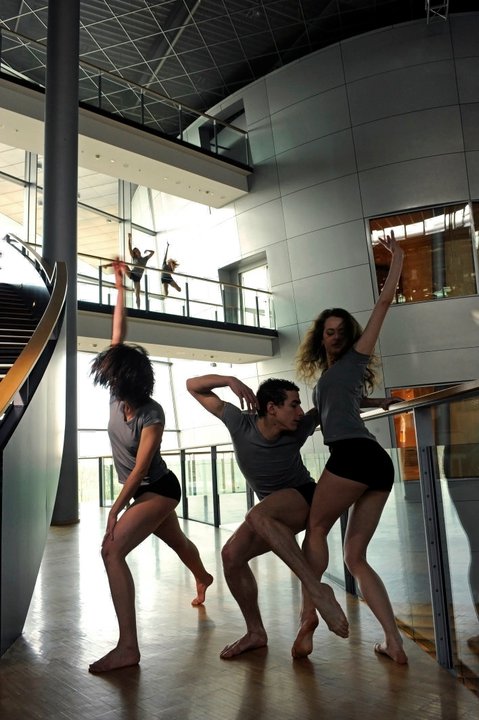 .... and now the rest of the show just relax and enjoy - no more details ;-) The dancing out of the winter could begin - with the jackets and rubber boots emerging in quite energetic dwarfs dancing like howling dervishs. The fairy tale of Rumpelstiskin came instantly to my mind, and a conversation on Facebook earlier this morning on tacit knowledge. Exactly this kind of surprises happen when touched by overtaking emotions - and ballet is certainly a way to encourage this. 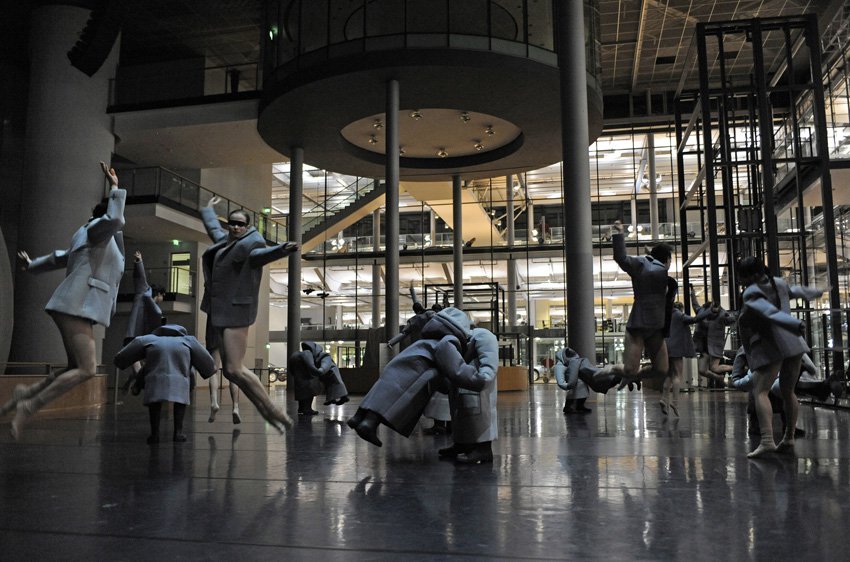 Good: excellent and suitable venue, thrilled dancers, the youngsters (Elevenprogramm) "pulled" by the energetic team (working together of different age generations), short distance to stage (!), the lightning, diversity of audience (in age and place of origin).

Tricky: my somewhere in the middle of nowhere caught cold a few days ago (which hindered a bit to express my wished appreciation - felt like at past Ultimate Frisbee tournaments when my team made through the finals).

Learned: everything is somehow connected with everything else (mostly not directly seen, only in the right moment and incentive the connection become apparent).

Action: looking forward to public ballet training with Semperoper Ballett next Saturday, 12th of March (one ticket to share - you'll find me on the Web ;-)).

Thinking about it with a few days distance and having heard other voices on Twitter (#Semperoper) the notion is overwhelming that we sometimes need the experience like such. As we can't see neurons and their action in our head (actually we often don't even appreciate what cool thing our mind is - we take it for granted) these kind of performances show a glimpse of what is going on inside. In these moments we are often overwhelmed, pretty much as people say Facebook would overload them, and yet this is exactly how thinking happens.

Firing neurons in ways one can't really predict in real-time and beautiful things emerge - just hang on and enjoy :-)

TacitMind
More Articles All Articles
About

I have studied business administration and economics. I got interested in the field of organizational learning and system dynamics while working...