Football teams have been wearing numbers since Arsenal experimented with putting their players in numbered shirts in 1928 (it didn’t bring them much luck – they lost 3-2 to Sheffield Wednesday). But it was Manchester United that made the number seven shirt iconic by putting their best players in it – perhaps most famously David Beckham, who said:

It always was an inspiration for me, but it was never my shirt. It was George Best’s, Bryan Robson’s, Eric Cantona’s. The only reason I wanted to wear the No 7 shirt was because of these players. I didn’t see it as an intimidation, I saw it as a honour … I always wanted the No 7 shirt, I just never thought I’d get it. And when the manager decided to give it to me, it was special.

Why do we put importance on certain numbers? Could David Beckham’s words give us an insight into the real reason why people feel number 7 is lucky, or could it be that the history of the number permeates our culture so much that we are immersed in it without really knowing why. It’s all around us

Just think of the days of the week. Why do we have seven days? The seven days in a week are named after classical planets, deities and heavenly bodies – Monday (Moon), Tuesday (Mars), Wednesday (Mercury), Thursday (Jupiter), Friday (Venus), Saturday (Saturn), and Sunday (Sun).

The division of the week into seven days can be attributed to the Babylonian system. Relative to the path of the moon, a week is about a quarter (23.659%) of the time from one new moon to the next. The Babylonians celebrated a holy day every seven days to mark these four phases, counting from the night of the new moon. The four phases of the moon – new moon, first quarter, full moon, last quarter – last for about 29.53 days. 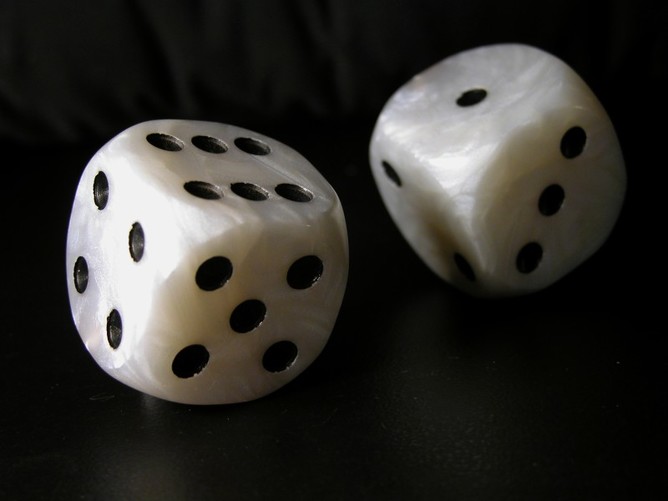 Opposite faces of dice add up to 7. Gaz via Wikimedia Commons, CC BY-SA

But we also have religious reasons for thinking that 7 is special – think: seven deadly sins and seventh heaven. In nature, you have the seven wonders of the world, seven colors of the rainbow, seven seas and seven continents. In the gambling world, the dots on the opposite sides of an ordinary dice sum to seven and there is a commonly-held belief that a series of seven shuffles will fully randomize a deck of cards. Strangely, eight perfect riffle shuffles will return a 52-card deck to its original order.

Newcastle University hosted the “UK Numbers Festival” in 2015 in a variety of venues in and around the northeast of England. An overarching festival question was: “What is your favourite number – and why?” designed to act as a “glue” to bind together the diverse aspects of the festival. This engaging question hoped to capture the imagination of the region and ask the general public to think a little more about numbers and how they influence their lives. Here are the most popular numbers of the 442 people who answered the survey (of a total atttendance of 10,000 people at the festival). Seven was the most popular choice for both men and women.

The survey revealed some other findings, too. The distribution of favorite numbers was less for women, 85% of whom chose a number less than 30. By contrast, 85% of men chose a number lower than 64. No female chose a negative number whereas three men did.

This goes against certain beliefs about odd and even numbers, such as in Pythagorean theory and the Chinese philosophy of Yin and Yang, in which numbers were viewed as possessing gender – odd numbers, masculine and even numbers, feminine.

Why did so many people pick 7?

A lot of people expressed an interest in number 7 for a variety of reasons and not just because it was considered lucky. A number of people said that they had no idea why they liked it. Perhaps part of the answer lies in a seminal paper published in 1956 by the psychologist George A Miller called “The Magical Number Seven, Plus or Minus Two”. Miller claims that it is more than just coincidence that the number 7 seems to be all around us.

Our immediate memory has been shown to perform well when remembering up to, and no more than, seven things. We can distinguish and make a judgment about seven different categories, and remember around seven objects at a glance.

A 2008 study on memory by Migliore, Novara and Tegolo, showed that the brain produced the best information when the branches (dendrites) that receive stimulation numbered seven. It suggests that we remember best in sevens because that is how our brains prefer to store data.

People certainly voted for seven in our favorite number survey. Perhaps the reason they did this is to do with Miller’s brain function. Or could it be, as David Beckham said, that it is the history of the number that is important. Maybe this legacy goes all the way back to the Babylonians and is hardwired into our brains. Or perhaps the number 7 is just special.

By Steve Humble, Mathematics Education Primary and Secondary PGCE, Newcastle University. This article was originally published on The Conversation. Read the original article.