It was quite unlike any other acceptance speech of the UEFA President’s award. In a rather philosophical address before the Champion’s League draw in Monaco, former football player and actor Eric Cantona claimed: “Soon the science will not only be able to slow down the ageing of the cells, soon the science will fix the cells to the state, and so we become eternal.”

But what was he actually talking about and does it hold up? In the context, the statement seemed out of place, perhaps even slightly mad. There’s pathos in seeing aged sportsmen too – once sublime athletes now reduced to a snail’s pace and going grey. And this gets to the heart of the human condition – it is defined by limitations, most notably ageing and death. Cantona though, wears his age gracefully if unconventionally, much like he played the game.

But there was more than madness in Cantona’s words. The point he is making is important. As a species, we are on the cusp of creating technologies that may fundamentally alter our capacities, promising radical potentialities and perhaps even immortality.

There is indeed work going on to reverse ageing with some believing we may be able to halt it altogether. And increasingly potent artificial intelligence (AI) may aid this process. In his book Superintelligence, philosopher Nick Bostrom suggests AI may soon exceed human-level intelligence resulting in an intelligence explosion. Such a scenario makes anything thinkable, and he believes it could happen in a few decades.

We have seen great strides in science and technology over the past century, some of which have resulted in increased global average life expectancies. At the same time, there are increasing numbers of existential threats, such as nuclear weapons and climate change. This points to a limitation of human reason that does not elude Cantona: “Only accidents, crimes, wars, will still kill us. But unfortunately, crimes, wars, will multiply”.

The problem is a duality to human reason. We can interrogate the world with the scientific method that enables us to create technologies which empower us – “instrumental reason”. How to use these advances remains a problem, a question of “moral reason”.

Indeed Cantona’s suggestion that wars and crimes will multiply emphasizes that instrumental reason can progress while moral reason regresses. Technical progress does not ensure moral progress, as was powerfully demonstrated by the two world wars of the 20th century and the many ensuing conflicts since. The climate crisis and our current political malaise also illustrate this.

Cantona’s speech opened with a quote from Shakespeare’s King Lear: “As flies to wanton boys are we to the gods,/ They kill us for their sport”. The quote is also prescient. Much transhumanist literature is dedicated to the idea of humans becoming gods. But what kind of gods? 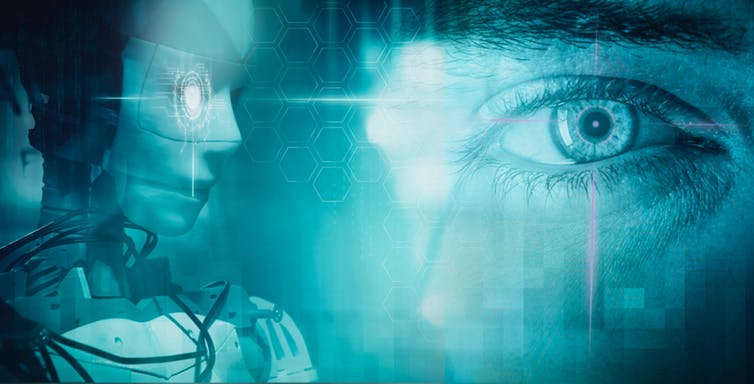 AI may progress faster than we think. rimom/Shutterstock

The current gods of transhumanist progress are defense agencies and tech giants. As AI guru Ben Goertzel points out: “AI is currently used for selling, spying, killing and gambling.” We may therefore be set to become inhuman, not posthuman gods.

What do we value?

A telling part of Cantona’s speech is the reaction to it. The word most commonly used to describe it is “bizarre”. What makes it bizarre is not the content, as much as the context. In such a scenario ex-players are expected to offer up platitudes rather than philosophies of human existence.

So, as we are developing such powerful technologies, what is the context? It is advanced capitalism, and it does involve selling, spying, killing and gambling. Such is the all-encompassing nature of this system that we barely recognize it as a context at all – it is a given.

Capitalism also embraces instrumental rationality – it fulfills its demand for palpable progress and growth. It does not have much time for questions of morality. Markets bypass moral questions by asking is there a buyer, is there a seller and what is the price.

Mathematics and science are the formalized methodologies of instrumental rationality. It is no surprise then that humans themselves are increasingly subject to this process of quantification. Surveillance provides data, the “new oil” that boosts information capitalism. Humans are now the mines. This is the bizarre world of transhumanist development in the context of advanced capitalism.

In its most hubristic and unquestioning form, bolstered by unapologetic and brash advanced capitalist logics, transhumanism poses myriad threats: from automation unemployment to the end of democracy, to the risk that humans will branch into different species, making questions of inequality infinitely more urgent. Even if immortality arrives it will be accompanied by crimes, wars and accidents – as Cantona states.

But there are alternative ways to think about the future. Posthumanism also deals with our uncertain future, but focuses especially on moral questions. It aims to think ethically beyond the human, emphasising a responsibility towards the wider nature of which we are a part. Posthumanists “are bonded by the compassionate acknowledgement of their interdependence with multiple, human and non-human others”.

It is time we asked ourselves what aspects of being human we most value. For me, compassion, kindness, appreciation of nature, art and humor are paramount – those aspects most strongly connected with the moral aspect of human reason. Instrumental reason will continue at pace, and perhaps to the cost of these human idiosyncrasies – imperfect, inexact, unquantifiable.

As a Liverpool fan (sorry Eric), I was happy with the Champion’s League draw and Van Dijk’s award, but in the grand scheme of things Cantona’s speech was the most important moment of the event. It reminds us that a radically different future looks to be on the way, and our current social systems and cultural beliefs mean that we are in no position to take advantage of it.

By Alexander Thomas, PhD Candidate, University of East London. This article is republished from The Conversation under a Creative Commons license. Read the original article.