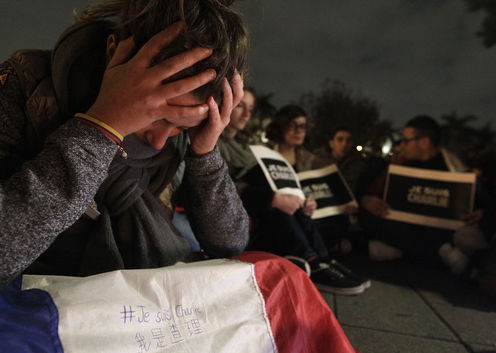 Solidarity with France and Charlie Hebdo in Taipei Pichi Chuang/Reuters

In his 1998 novel, The Elementary Particles, Michel Houellebecq argued that Charlie Hebdo played a pivotal role in the redefinition of social values in post-1968 France.

For self-appointed troublemaker Houellebecq, Charlie Hebdo was more than a weekly newspaper devoted to the “contestation of capitalism.” It was also instrumental in importing the “North American hedonist-libidinal option,” which would lead to the “destruction of Judeo-Christian morals.”

It is not unlikely that the early contributors to Charlie Hebdo would have more or less welcomed this negative characterization.

Until the tragic events of this past Wednesday, Charlie Hebdo, with its irreverence, deliberate bad taste, and overt anti-capitalist politics had been a symbol of 1970s radicalism, including its anti-democratic variants.

This was, after all, the weekly whose founders mocked President Charles de Gaulle’s death, and who published the Marxist columns of crime novelist Jean-Patrick Manchette. Indeed, I first began to study the history of Charlie Hebdo in an effort to better understand the context of Manchette’s virulent attacks on 20th-century capitalist politics and culture.

It is therefore surprising to find, in the aftermath of the murders of this past Wednesday, Charlie Hebdo celebrated as an embodiment of “French values” or, outside of France, of the more nebulous category of “our values.”

Newspapers like Le Monde have limited themselves to brief and touching statements expressing solidarity with the magazine and decrying the attack on the “foundational values of our society.” But at the right-of-center Le Figaro, the rhetoric has already taken a much more disturbing turn with editorials arguing “war has been declared” and issuing a call to arms.

After the obligatory appeal for national unity, readers of Le Figaro are told that it is the duty of every citizen to prepare him or herself morally for the task ahead: “How can we defend our values if we are not convinced of their preeminent dignity?”

The main enemy that has been identified is, of course, Islamic terrorism, but journalists on the Right have wasted no time in identifying other enemies: “perverted humanism,” “misplaced anti-racism,” “abject cultural relativism,” and “post-colonial guilt” are just some of the terms that appear in two recent editorials in Le Figaro.

This response to the odious attack on Charlie Hebdo suggests that it will be a bloody gift to partisans of xenophobic sentiment in France.

I cannot help but feel that there is something deeply worrisome about the marriage of Charlie Hebdo with the call to defend “our values” against the barbarians at the gate. The attack was barbaric, as Charlie Hebdo’s website has suggested, but it was not aimed at “France,” but at a journal with a particular history.

Charlie Hebdo was, at its outset, a weekly whose editors' erstwhile slogan – “stupid and vicious” – signaled their desire to play the role of barbarian to bourgeois French society.

Charlie Hebdo may be a chapter in a long French tradition of political satire, but it was always deeply opposed to a particular idea of “French values.”

The first point that I would like to make about this appeal to “our values” is that in France, as elsewhere in the world, free speech has been and continues to be a negotiation, often punctuated with explosions of violence. Let us not forget the attempts made on Jean-Paul Sartre’s life after he spoke out against the French occupation of Algeria.

It is doubtful that many of the right-wing commentators who are lining up today to defend freedom of speech have taken the side of the numerous rap groups who have been accused, and even convicted, of inciting violence with their music. Likewise there are laws on the books in France which prohibit Negationism (or the denial of historical events like the Holocaust) and inciting suicide.

What seems to have been lost in the rush to defend “our values” is that at the beginning Charlie Hebdo stood not for some eternal French value of free speech, but for a particular form of free speech against France, its society and its politics.

The name Charlie Hebdo (hebdo meaning weekly) – which can be read as a reference to either Charles de Gaulle or Charlie Brown – was in fact adopted in order to get around the ban imposed by the French government on the weekly’s forerunner, Hara-Kiri Hebdo, which had had the temerity to mock the death of Charles de Gaulle. The very first cover of Charlie Hebdo bears the sardonic headline, THERE IS NO CENSORSHIP IN FRANCE.

It is also, arguably, bookended by two incommensurate acts of free speech, one attacking the dominant political and social order of 1970s France, and the other mocking the beliefs of an economically and socially marginalized minority group (who can forget the 2013 cover with an image of bullets going through Koran, with the headline “The Koran is shit”).

The point is not to suggest some false equivalence between the censorship of the French government and a killing spree, but rather to suggest that we should stop to think about what we are saying when we argue that “our values” have been attacked.

These murders were, it appears, committed by French citizens; violent, radicalized French citizens, but citizens nevertheless. There are laws in place for the punishment of murders, laws that will be brought to bear if and when the perpetrators are caught.

It is reasonable to suggest that this is a moment when we can collectively engage in a dialogue about free speech in our societies. It is less reasonable to claim that values have already been agreed upon and must be defended in an unspecified war.

It might be more in keeping with the critical spirit of Charlie Hebdo to take seriously the idea that this violence was not just the doing of some wholly external malicious force, but also a consequence of the contradictions and divisions within France, a country that is home to a plurality of values.

Lucas Hollister, Assistant Professor of French at Dartmouth College, does not work for, consult to, own shares in or receive funding from any company or organization that would benefit from this article, and has no relevant affiliations.