Many of society’s energy challenges require gigawatts of power, but many more are small – and some are entirely microscopic. To drive a new generation of tiny micromachines that could deliver drugs or clean traces of pollution, physicists are increasingly looking to biology for inspiration.

In work published in the journal Science Advances, my co-authors and I present a simulation of a sort of tiny “windfarm” powered by the natural self-organization of bacteria. It’s a small step towards harnessing the energy potential of microorganisms.

We used computer simulations to model many swimming bacteria, such as the E. coli you find in your gut. A dense crowd of these swimming bacteria isn’t too different from traditional, passive liquid, though there’s one major exception: it spontaneously flows, with internal whirling currents. Physicists have started calling anything that spontaneously flows in this way an “active fluid”. It looks something like this:


A dense group of E. coli swimming around … randomly?

We first placed a solitary disc-shaped rotor in the midst of these chaotic swirling jets. Since the rotor was pinned in place but free to rotate, the turbulence randomly spun it in all directions, like a weather vane in a hurricane.

However, when we included an entire array of closely arranged rotors on a grid, we saw something more interesting happen. Mimicking more complex biological self-organisation, the rotations spontaneously organized, with each rotor spinning in the opposite direction of its neighbor. 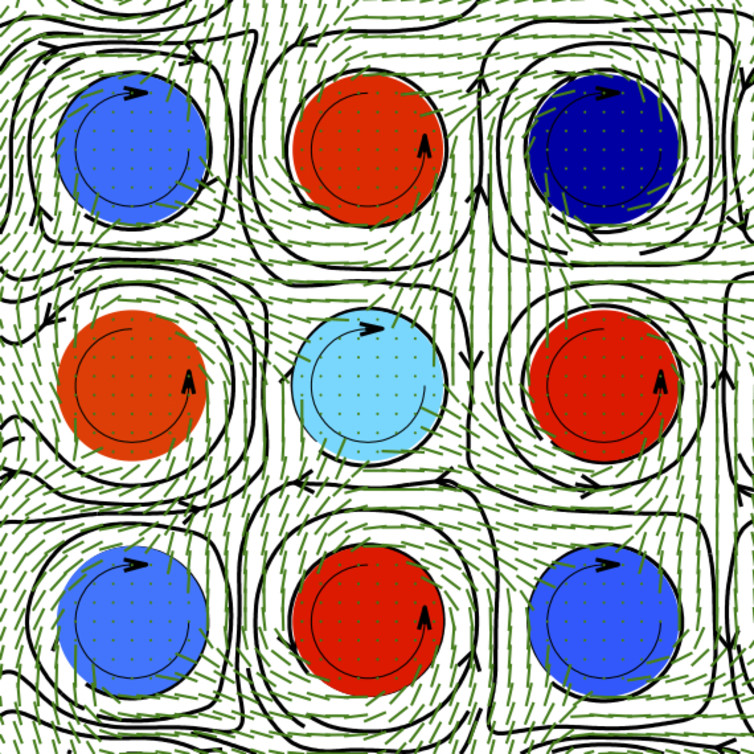 When placed in the bacteria, rotors began to spin in alternating directions. Tyler Shendruk, Author provided

Every single rotor in our simulation permanently obeyed the pattern, as long as they were close enough together and a whirl of bacterial fluid was trapped around each one. This orderly spinning reminded us of a microscopic wind farm, powered not by gusts but by the surrounding bacteria.

So what was going on?

Without the rotors, the chaotic swirls of the bacterial flows randomly whirl in all directions. But when we added the rotors, they got in the way of this disordered mess.

Since the swirls couldn’t really fit well between the two rotors, the bacteria started whirling around and around each rotor. In a way, the rotors became the mechanical heart of each swirling jet of bacteria. They anchored the swirls in place and, in return, the bacteria permanently organised the spinning of the rotors.

The bacteria and the rotors form a partnership and out of that cooperation an organised pattern spontaneously occurs. Physicists call this natural emergence of a pattern “self-assembly”. Self-assembly is when simple building blocks organise themselves into complex structures or self-heal. It is spontaneous but orchestrated action.

Nowhere is self-assembly more evident than in developing tissues, where cells move collectively into a part of an organism. Striking examples of this multicellular cooperation include gastrulation, an early step in an embryo’s development from a group of cells into a fully-fledged organism; or Volvox inversion, in which a colony of single-celled algae flips inside out. But these examples are both purely biological.

In fact, many of us physicists are already working on systems that involve both biology and micro-mechanical components that come together to self-organize. For instance, scientists have just developed a ray-like swimming robot with a microfabricated skeleton and a rubber body that is powered by heart muscle cells.

That’s the long-term goal: to build tiny machines that don’t struggle against biology, but instead work seamlessly with or even depend on it. Our ability to engineer the microscopic world is an exciting prospect for the future.