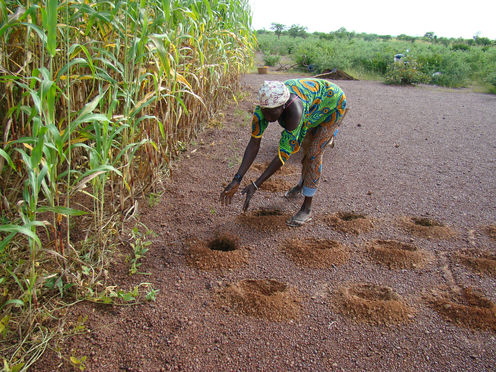 By Sayed Azam-Ali, University of Nottingham

Africa will be able to feed itself in the next 15 years.

That’s one of the big “bets on the future” that Bill and Melinda Gates have made in their foundation’s latest annual letter. Helped by other breakthroughs in health, mobile banking and education, they argue that the lives of people in poor countries “will improve faster in the next 15 years than at any other time in history”.

Their “bet” is good news for African agriculture: agronomy and its natural twin, agricultural extension, are back on the agenda. If Africa is to feed itself, the women and men who grow its crops need access to technical expertise on how to manage their variable natural resources and limited inputs and market intelligence on what to grow, what to sell and what to keep.

New tools in the hands of farmers

But there is no quick fix that will transform African agriculture without skillful agronomy and intelligent extension. Whatever the promises brought by new, drought-tolerant varieties of crops such as maize, they cannot achieve their potential without the wise management of fertilizers, timing of cultivations and appropriate crop rotations. As the graph above shows, sub-Saharan Africa’s crop yields remain very low compared to the rest of the world. Sadly, in our rush for only genetic solutions to increasing agricultural yields, we have ignored the fields and landscapes in which crops are grown.

The consequence has been a missing generation of scientifically trained agronomists and agricultural extension workers – who help teach farmers about new farming practices – with the skill sets required to manage resources and apply principles.

Meanwhile, powerful tools such as geospatial mapping, predictive modeling, remote-sensing (using aerial imaging to assess the state of vegetation) and mobile technologies have advanced to a stage where they are of practical use to the scientific agronomist, educated extensionist and literate farmer. We now have a real opportunity to link genetic advances and improved management with the social and economic drivers for African agriculture.

This “research value chain” between grower and consumer requires that each research discipline plays an interconnected role with the end-user always in sharp focus.

So, what are the priorities for African agriculture in the next 15 years? First, we must rehabilitate its soils. Since 2015 has been declared as the UN International Year of Soil, we need to recognise that Africa has some of the world’s frailest soils, which have suffered most from “cereal abuse” through the almost continuous cultivation of cereal crops.

These monocultures have left Africa’s soils tired and impoverished. Applications of fertilizers will not, by themselves, be enough to save them.

For sustainable agricultural systems, we need to reconsider our addiction to major cereals grown as monocultures and move from “calorie security” to “nutritional security”. For this, nitrogen-fixing leguminous crops have to be part of any solution.

In his Noble Peace Prize address in 1970, Norman Borlaug, the father of what became known as the “green revolution” in South Asia, recognized the imbalance between research advances on the major cereals and those on all other crops:

The only crops which have been appreciably affected up to the present time are wheat, rice, and maize… nor has there been any appreciable increase in yield or production of the pulse or legume crops, which are essential in the diets of cereal-consuming populations.

Approaching 50 years later, the situation remains similar. Clearly, improvements in leguminous crops (such as beans and lentils), both in their own right as nutritious sources of food and as rehabilitators of soil, are long overdue.

Since 2016 has been declared as the UN International Year of Pulses, there is no better opportunity to redress the historical imbalance noted by Borlaug.

Crops for the future

We also need to recognise that most African family farmers are women. Often the species they cultivate are not the major cash crops grown by men as mechanised monocultures. Rather, they are local “underutilised” species, often legumes and vegetables, which families cultivate in complex landscapes for their own sustenance.

These crops, and the multiple cropping systems which support them, have few influential champions and rarely feature in the research strategies of national and international agencies. But it is crops and agricultural systems such as these that will help Africa feed itself sustainably.

In a very real sense, these crops for the future” will help diversify Africa’s agriculture to meet the volatile physical and economic climates that lie ahead. Unlike the major crops which have received billions of dollars of support over generations, underutilized crops deserve a “big bet” over the next 15 years if they are to help achieve major breakthroughs for most people in most poor countries.

Sayed Azam-Ali, CEO, Crops for the Future Research Centre and Professor of Global Food Security at University of Nottingham, does not work for, consult to, own shares in or receive funding from any company or organization that would benefit from this article, and has no relevant affiliations. This article was originally published on The Conversation. Read the original article.