Are Antimicrobial Condoms The New Frontier Against STDs? Not Quite
By The Conversation | October 12th 2014 04:31 PM | Print | E-mail 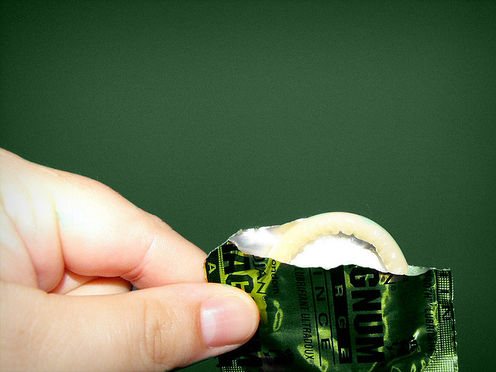 Very little has been published on VivaGel in peer-reviewed literature. Credit: Morgan/Flickr, CC BY

The Australian biotech company Starpharma has announced the imminent launch of a condom coated with an antimicrobial chemical known as VivaGel.

While it might be marketed as a great leap forward for preventing sexually transmitted infections (STIs), it’s unlikely to offer any more protection than your average condom.

Condoms are effective at preventing pregnancy and a range of STDs, including HIV, because they provide a direct barrier to the transfer of fluids between sexual partners. They can, nevertheless fail, either by slipping or tearing, so it makes intuitive sense that a condom might be further improved if it were possible to coat it with a chemical that could neutralize infectious agents, sperm or both.

In the 1990s, some condoms were coated with the spermicide nonoxynol-9 as part of a “belt and braces” approach to pregnancy protection. Nonoxynol-9 was also known to be able to kill HIV in the test tube, and so was being tested in clinical trials for possible use as an anti-HIV “vaginal microbicide” – a product women could insert before sex to protect themselves.

It seemed safe in small trials but in 2000, the major trial was halted prematurely; the researchers had found that women using this product had a higher likelihood of acquiring HIV than those on placebo. In other words, nonoxynol-9 increased rather than decreased HIV transmission.

Despite this disappointing result, trials of possible vaginal microbicides continued. But in 2007 another product that had at first seemed safe also showed signs of increasing rather than decreasing the risk of HIV acquisition. The take-home message was that products that appeared safe in smaller-scale safety trials may look very different when used in a broader population.

VivaGel began its life as a possible vaginal microbicide to protect against HIV and other sexually transmitted infections. So what do we know about its efficacy and safety?

Compared to a number of other products that have been proposed as microbicides against HIV and other STDs, very little has been published on this product in peer-reviewed literature. There are three published studies, and in two of these, women reported mild vaginal inflammation and irritation while using the product. This is troubling, as inflammation can increase the risk of acquiring HIV.

Although VivaGel was initially developed as a possible vaginal microbicide against HIV and HSV-2 (the cause of genital herpes) the clinical trials conducted so far have focused exclusively on prevention of bacterial vaginosis, a condition of the vagina that is probably sexually transmitted, but has never been conclusively linked to a specific organism.

In July the company announced it had approval from United States regulatory authorities to run a definitive trial to see whether vaginal insertion of the product protects women against repeat episodes of bacterial vaginosis, but these trials have not been concluded. Bacterial vaginosis is probably sexually transmitted, but has never been conclusively linked to a specific organism. Annette Shaff/Shutterstock

So, apart from some promising preliminary findings on bacterial vaginosis, there are no clinical trial data to support the proposition that applying VivaGel to the genitals before, during or after sex could protect against HIV, or any other known STD.

But is there any harm in people using a condom that has been coated with this project?

VivaGel-coated condoms have been assessed as meeting Australian standards, so it can be considered to provide as much protection as other condoms on the market.

However, the marketing of a coated condom as “antimicrobial” could have undesirable effects. First, in the event of a slippage or breakage a user of a VivaGel-coated condom may consider him or herself to have some extra protection.

In a situation of high HIV risk, the false reassurance of the coating may deter a person at risk from seeking post-exposure prophylaxis with anti-HIV drugs, an intervention which only works if commenced within 72 hours of exposure.

Similarly, a person at risk of other STDs such as gonorrhoea and chlamydia may dismiss an episode of condom slippage or breakage under the misapprehension of extra protection, and not seek testing for these STDs. A consequence could be that infection is unknowingly acquired, and then passed onto other partners.

All condoms marketed in Australia meet exacting standards, including the new VivaGel coated condom. There is no clinical evidence to support the idea that this new product adds any extra protection from HIV or HSV-2.

If you want to prevent pregnancy, HIV and the range of STDs apart from bacterial vaginosis, any condom that meets Australia standards should be considered as good as any other.

Bridget Haire, Lecturer in ethics at UNSW Australia, is the Vice President of the Australian Federation of AIDS Organisations (AFAO), a not-for-profit community-based organization. The views expressed here are her own.